What are the benefits of the Core?

David, thank you for your follow up. Happy to hear from you!
I’ve not done more than email Naim who said nothing of use and my dealer is like the three monkeys and took the money and ran. The bottom line is their justification for struggling with Uniti Core, or is best to walk away and sell as market allows. And have you personally addressed this to your satisfaction with alternate pathways. I was very impressed from skirting Melco’s site, but I don’t know what it looks like living with it under the covers and hopefully I’m prepared for the naked reality.

Good note David, i too have raised with Naim reps at my dealer to no avail.

Gazza, thank you.
Would very much like to get feedback from anyone whose used alternate systems. Regrettably wouldn’t have to do this if Naim were mindful of what I think is obvious.

Trickydickie, I thought Naim gear was now “Roon Ready?” Or is that only for current generation? Does new gear like ND555 come with bridge to Roon?

Current gear is Roon ready so it will work as long as you have a Roon server.

The legacy equipment is UPNP only so a bridge sits between Roon and the streamer and received the music from Roon and sends it to the streamer via UPNP.

Yes, I have the Melco. As Darkbear, Steve, Bertbird, Meni, and probably others.
However only @BertBird and Meni listen to classical music.
Bert should respond I feel, because personally I have no skills on metadata problems.

Innuos server are very friendly for classical music africianados.
Here an example of the use: 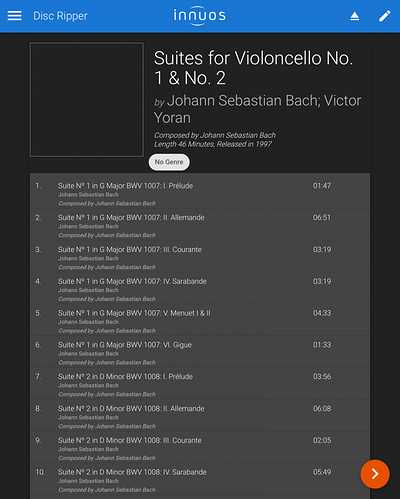 Then the possibility to change the metadata, cover, performer, genre, conductor…Only using the APP. 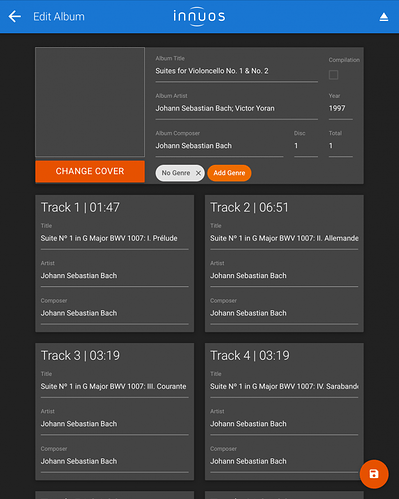 I stuck Gary on my last reply to you, i am sure he will respond, though i am not sure how much classical music he listens to.

I listen to a broad range of music that does include classical, but I’d not count myself a classical ‘expert’ - I do know some friends who go into it somewhat deeper that I do. I know what I like and enjoy and that includes many classical items, both large-scale symphonic and intimate smaller groupings of players - solo piano and bowed string instruments seem to be what I play a lot of at present.

…but to the Melco - yes it does these all very nicely to my hearing of it - very neutral natural dynamics, good ‘start-stop’ of notes and natural harmonic decay. It was a lot better than a standard NAS, which sounded very murky, distant and colored by comparison.

My Dealer does all Naim stuff so the Core was also on demo, but the Melco had it in terms of immediacy for me - and that suits to my Active system set-up. Active tends to reveal timing problems so I like to remove them as best I can with system component choices - the Melco did that for me.

I have the earlier but very good Melco N1Zh-2 (6TB).
The later versions with external PS do sound cleaner and should be even better for classical. The cost to swap is not there for me in the SQ difference with what I already have, as it also does some aspects of ‘immersive deep-bass’ very well that I want to keep - it is easy to upgrade-away things you enjoy.

The Melco does get-on very nicely with the ER switch and probably other very good network switches so that aught to be auditioned too.

As to High-Res music - I’ve not had great success that way so far and find that how the music is mastered (simpler) has a vastly more powerful impact on the performance than the final ‘container’ of bit-rate/bit-depth it is presented as. All else being equal the Hi-def would be better - but unfortunately for a lot of music I like it is remastered and ruined before getting to hi-def, so I carefully select earlier ‘CD quality’ masters to rip and these are miles ahead in terms of everything on my system - silly-better.

But I think there is a lot more good classical and jazz music that has been done very well to high-def so these will be a lot better for the better mastering.

some are missing the key feature of the Core

the core also offers (which the Melco does not) a very high quality, low noise, and low jitter , stable SPDIF BNC output, which can be used with NDAC, or a Chord DAC.

I can only go by audition - my Dealer let me listen to Core feeding Naim Streamers (NDS and then ND555) via the non-Ethernet digital link vs Melco using Ethernet - and the Melco was clearly better in terms of what I value of immediacy, detail, micro-dynamics and timing.
At the time it was considered the Ethernet-connected Streamer should not have been performing better, but it did, for me. I have an all-Naim system otherwise, so I was biased toward preferring the Core, but Melco was better. I know people with Core you vehemently prefer otherwise so it may come down to personal taste and the rest of the system.

I’m sure the Core can work excellently as well, just worth having a demo if you can if considering both.

Darkbear, thank you taking time to offer extended and meaningful reply!
Based on Gazza’s suggestion of Melco I went to Melco website and was seemingly impressed by the order and coherence of database. However, by any measure they listed very few audio retailers in States and when I went checked out websites of listed stores about quarter of them, actually none were carrying Melco.
Melco also lists brands and their products and compatibility, as well information about compatibility, Naim digital gear is listed, but nothing is compatible. Don’t know if your incarnation was earlier and therefore more flexible, or if you or your dealer bridged it.
Melco is owned by significant Japanese electronics company so one might assume they were taking this venture seriously, but their current US footprint is odd given the sterling reviews in media.

Analogmusic, thank you for that important feedback that is not mentioned, but regrettably leaves one hoping that Naim would remember they are peddling music replay that needs to be more find than hide, that I think is core issue with Core software.

Melco also lists brands and their products and compatibility, as well information about compatibility, Naim digital gear is listed, but nothing is compatible

Ethernet connection to streamer means it is universally compatible - Ethernet is a standard so if both items at each end Naim and Melco use it to mediate the data then all works fine.

Where some interconnect are not industry standard then you need to have a tick-box to say it is compatible. But as I use Ethernet for everything, it all works fine.

Jmtennapel,
Thank you for your response.
I should have stated at outset of my question that I wanted to buy a ND555 with target of 2X555PS in near-term, but modern world leaves me suspect about new devices with history of suffocating entertainment owing to their foibles. Over the years I wanted to buy NDS, but was repeatedly discouraged by dealers, sales persons and installers who spoke of horror-shows connected to NDS setups. It’s possible no one on their staff had requisite skills and perhaps still don’t, but the warnings kept me at arms length until recent swooning revisit of ND555 by Martin Colloms in HiFi Critic. Still gunshy I decided to buy Uniti Core and QNAP and give ripping and cataloging a try. After 4 or 5 hundred rips I decided Naim had never heard of iTunes. I’ve stopped slogging away at what I determined was most likely lost undertaking and decided to rethink. At moment I imagine I might be best served by staying with my beloved CDS3/555DR PS and add on NDS555/555DR PS. If I later find sanctuary to my problem I can always re-rip, or live with crippled library Naim fosters. I am very, very open to acquiring alternate setups like Chord and thinking and trying to learn enough to make informed purchase, less for concern about flawed investment than for matching and patching over the long haul.
Opinions welcomed.

The user interface through the Naim app is much better if you use uPnP via a network rather than plugging into the USB input, if that important to you. Either a Core or a NAS and uPnP facility on a computer. I went with a Core to keep it all separate from my computers.

Are you sure? ND5XS2, NDX2 and ND555 run the same UPnP server as the Core on data stored in attached drives. They make those data available to any UPnP renderer in the LAN, in much the same way as the Core. I would have expected the Nova to do exactly the same.

What benefits does the Core bring in comparison to just ripping the CDs into an external hadrdrive and then attaching the HD to the back of the Nova?

No benefits and, in fact, a number of disadvantages: support for metadata (and metadata editing) is very poor and the UPnP server running on the Core does not honor user-specific tags.

Better to rip and edit on a Linux, OS X or Windows computer and let MinimServer or Asset serve the music data. MinimServer can run on virtually any small computer (a Raspberry Pi 4 is perfect) in your LAN. I guess the same holds for Asset but I have no first-hand experience with Asset.

May i ask, when ripping via dBpoweramp what level of encoding is best: the lossless level5 or lossless uncompressed? Also should i tick the “after encoding verify written audio” box?

Ripping CDs on a computer with DBpoweramp is a great deal more flexible that doing it on a Core. Both will give you an accurate rip, but the metadata handling of the Core is severely limited to a far greater extent than any other ripper or server I’ve ever come across.

As was the HDX. It’s disappointing that Naim have done so little about this in their newer generation ripper.

I also use dBpoweramp. Once set up and the basics are understood, it’s miles better than any proprietary ripper and the argument about rip quality is just marketing.

Are you sure? ND5XS2, NDX2 and ND555 run the same UPnP server as the Core on data stored in attached drives. They make those data available to any UPnP renderer in the LAN, in much the same way as the Core. I would have expected the Nova to do exactly the same.

Ah, my mistake, getting confused with the earlier generation streamers.