What else can you use your Naim kit for?

Yesterday I was baking some bread and as it was a bit cooler in the kitchen-dinning room my bread dough was slow to rise. I realised that the unitlite was always warm to the touch, so placed my dough in the kitchen aid bowl on it. It worked really well and in the future I will be using the newly discovered naim technique on cooler days when I am bread making. 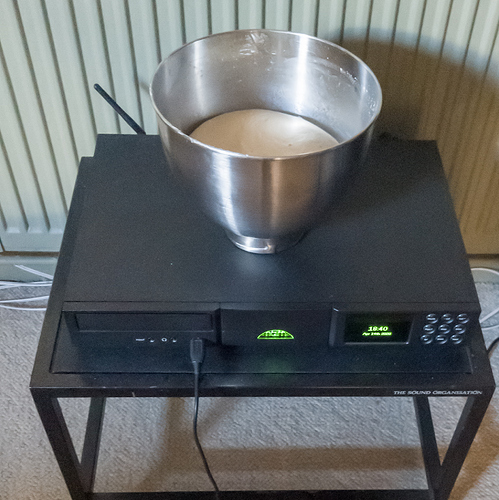 What other uses do you have for you naim kit besides providing you with exceptional sound quality?

Nice way to bake “upgraded bread”. I am sure it will be the most tasteful ever!

My first Unitiserve was fried by a lightning strike. It now makes a handy doorstop.

Well SWMBO used to put a pot of dried flowers on top of my CDS. Took me months to get her to stop doing it,

There should laws to stop people from doing that.

There are, but divorce seems a bit extreme.

Not to mention expensive.

I suspect you wouldn’t be the first!

Had no effect on the sound as far as I could hear. The problem was that bits would fall off and I’d have to remove them from the CD well. (using a hand-held vacuum cleaner).

What could have had a seriously detrimental effect was when they were kittens and fascinated with turntables and arms. This was discovered when one batted the Ittok Asak combination across an album, fortunately with no damage. This resulted in playing albums with Linn’s lid on and down becoming the order of the day, potentially saving severe damage to my wallet.

You might want to think about having your Unitilite display turn off after a short time, as otherwise you will probably need to get it replaced by Naim in a year or two, which they might or might not charge for doing.

I didn’t know you could turn it off.

Will likely leave it on though. I use it as a clock whilst in the kitchen or dinning room. It is a very versatile piece of naim gear.

Well whatever! The displays on these old Naim streamer models do regularly fail though and the only way to avoid it is to have the display switch off after a few seconds. It’s a back to Naim job if it needs a new one.

We use Nac A5 to unclog the vacuumcleaner.

Ah yes, I well remember the horror of watching Suzy Wong stepping over the Zeta (which was up on its lifter) and discovering the bouncy platter on the Sondek…fortunately the was no LP, and it did bounce rather well

There are some posters who won’t know that Suzy Wong is a sadly lamented cat, they’re now thinking you bounced on the LP12 and leapt from the curtain rail onto the speakers.

How does that “Tarzan yell” go?

I am glad NACA5 wasn’t around when I was much, much younger! I remember getting some whoopings with Mattel Hot Wheels track as a kid, ouch!

Yes I know, these days spankings aren’t the thing, but in my day, yeah…

I use my Nova as handy storage for dust, especially around the volume control.