What made you downsize?

Seems like many follow the same path in adding and adding boxes then finally decide to downsize to 1-3 boxes. What made you end up with this direction?

Rack was never acceptable as the stereo is in our living room, and we struggled to find new furniture/sideboard that would fot it all.

The Star, combined with upgraded speakers, meant we could improve on sound while only having a single, reasonably sized, box to fit.

I had a five box system for amplification as well as a tuner and a CDX2 . The system needed a service and whilst getting it out was not difficult getting it back in would have been nigh on impossible .

In addition I switched my PMC FB1 to Harbeth P3 ESR

Switched to a Rega Aethos (a very fine amp) but it came with it’s own issues , such as weight, depreciation and all the inputs were in the wrong spot . Moving it or any changes were “difficult” so I switched to a Nova.

As a system it’s nearly there . It’s possible that I could switch to a SN3 and Atom HE , with the possibility of a HiCap . The SN3 would need a home audition

Here it is in one older “incarnation” 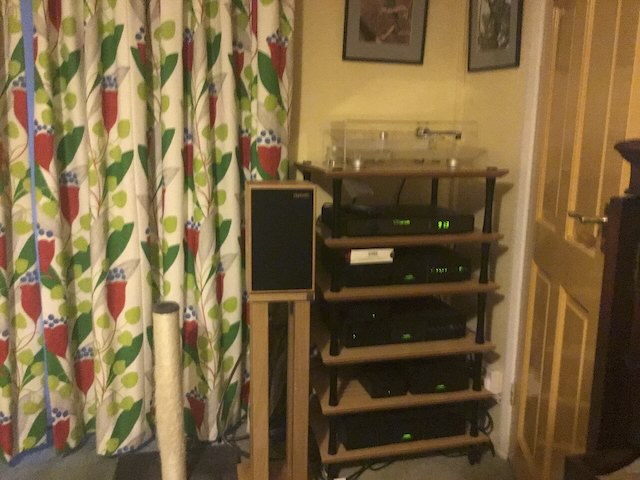 Then in another “scaled back” incarnation 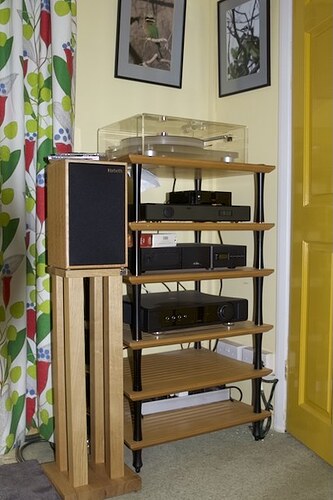 You may find these threads of interest:

Would you downsize? Padded Cell

If it ever became possible to get the same sonic performance from a single, small unit, that cost exactly the same as the multi shelf, multi box systems we have today. Would you swap?

Polling views/intent on downsizing or not Padded Cell

A companion thread to the “Would you downsize” one, this is trying to get an indication of proportions of people who have downsized or are considering downsizing in different circumstances, or not. Downsizing in this context means reducing the physical size of your hifi system to a material degree. In first creating this I didn’t think of an option to cover anyone who goes back and forth, down and upsizing (and I am aware there are a few). As far as being meaningful to the subject I guess that …

Not a downsize as such, but I moved my main system downstairs from the lounge and moved the Nova to the lounge so that the hi-fi was simplified and less intrusive in the lounge and I got a dedicated listening room where I can have more system time.

I ‘downsized’ because I was fed up with an ugly 5 shelf metal rack with different looking brands & various box colours spoiling visual harmony of my living room.
I designed & made my own rack in the same wood & styling of the Ercol furniture.
Three visible shelves & one hidden behind a door. Visible shelve have Supernait, CDX2 & NAT-05, plus a TT on the glass top.

Next, I became fed up with CD dust trap racks & the floor space they took up, I made the plunge into streaming.
Out went the CDX2 & CD racks & in went an NDX. Also the Rega Planar was moved on.
Now its just the three; SN, NDX & NAT-05.

But hold on !!! we are talking about downsizing ???
I might need to mention the two little PSU’s on SN & NDX that hide behind the rack door, then there’s the NAS & its UPS in their own cabinet & then the network switch & all the new wiring … it seems I might have more boxes than I started with, so maybe its not actually downsizing.
Oh well … we did try

For me, I’ve had two downsizing experiences, moving from multi boxes to integrated & source.

Firstly, the crash of the 90s meant work dried up to such a degree that I ended up selling assets, including my fully specced LP12/Ittok/Koetsu/52/135/Isobarik set up.

Secondly a house move stimulated a desire for greater system simplicity, and sold on my CD5X/112X/150X/Flatcap2X/Royd Minstrels.

Not sure where I’ll go next as I just can’t seem to make up my mind, I’m currently very happy with the less is more approach of the RP6/UQ2/Nait2/MA252 set up I now have, and I’m enjoying acquiring media more so than the chase of the perfect bass response etc. Although I do regret selling my fluted afro fruitbox though, that still smarts.

I downsized from a 32.5, Hi-Cap, 140 system to a unitilite due to a combination of illness and wanting a remote control and thinking a one-box solution was what I now needed. Later, I upgraded to a Star which seemed to me to be an ideal system for my needs going ahead. Then came covid, shielding and listening much more to music. So added a 250DR, upsized speakers and am now waiting for a 272 replacement or maybe buying an equivalent product from another manufacturer. So my downsizing whilst successful in the shorter term has led to a return to a separates system.

I think I have sidesized or resized. Starting last year when I accidentally saw a post about a set of not so expensive Audiovector r8s. With the regular prize r8 would be out of my budget, but at a reduced price it could work. Contacting my dealer he could make an offer close to the demo set and resell my active Audiovecctor r6 snaxo supercap and 1 of the power amps used with that setup.
Over the summer I managed to sell the 200 and 250 used on the active setup and buy a used 300 from UK that was in the good old days before brexit made it more expensive to buy from the UK.
Result now only 2 racks instead of 3 and 3 boxes less than before, but cable dressing is not easier in this setup!
After Christmas I unfortunately found a good deal on a used ndx2 from my dealer. After trying out and nd5sx and waiting a few months for a new ndx2 to show up I ended up buying a nd555 instead, so the streaming setup started out with ns01 ndac, ps555 and now the dac is replaced by the 555. So the same number of boxes in the new setup. I am refusing to go down the expensive switch road and to change power cables on the supplies for now at least.
The next logical upgrade is a 552 but knowing the price of a 552 this will take years until I am ready to go there and outside the UK 552 is very rare on the second hand market.
Claus

I might need to mention the two little PSU’s on SN & NDX that hide behind the rack door, then there’s the NAS & its UPS in their own cabinet & then the network switch & all the new wiring … it seems I might have more boxes than I started with, so maybe its not actually downsizing.

Hi Mike, this!
Our amplifier has downsized from four boxes to two.

The streaming system is frankly a brilliant sounding yet visually appalling mess of assorted small boxes. We have:

8 boxes in total, each one different (apart from the pair of Paul Hynes SR4T power supplies).
It won’t stay like this.

Downsizing the streamer will happen next but that doesn’t mean reducing performance.

Do the power amps fitted to active speakers count as boxes? If not, I’m down to a one-box system. OK, there’s a CD5XS as well but that’s so seldom used I tend to forget about it. I was not aiming for downsizing, it just seemed to happen and no reduction, rather an increase in SQ.

At one time I had 7 boxes including Dac,cd transport, Amp,Tuner,Av Amp, Streamer.Power Conditioner.
Behind the cabinet which also held the Tv,DVD, Freesat box, phone ,plus all the mains,interconnect and speaker wires . It was a mass of Spaghetti!!!
Now I’ve just the Star on the Audio front and it sounds better than before

Simple. It is space constraint for me.

Nothing, but I guess one day space will be the decider

‘Streaming’ i packed my turntable up and got rid of an integrated amplifier, a tuner, a cassette deck and lots of wires.

For a while a SuperUniti plus speakers did me just fine, then I started buying boxes again.

Presently contemplating another go at a single box solution plus speakers, who knows it might stick this time.

I downsized twice and currently try to do it a third time. The first two rounds involved better, noticeably more expensive, but richer in functionality electronics. Going from Moth 30 series mono amps to a YBA 2 stereo amp, for example.
A few months ago I looked behind my rack and decided that there were to many cables involved. Let’s see where I end up…

The resurgence of vinyl. I was never prepared to have more than one Fraim stack taking over the conventional living room space. To me one Fraim looks great, but more than one starts to look overbearing, plus the whole burndie thing is not designed for a single Fraim stack, it necessitates pushing the hifi more into the living room so the burndies can hang free and the whole massaging of cables thing is generally a pain. To accommodate a TT plus power supply and phono stage you are talking two extra shelves which leaves 4 for the rest. To me that’s the perfect hifi. Also SQ advances mean that you get more for less. That’s why the 272.2 is so missed at the moment.

Ain’t that the truth!

I’m another who decided to reduce the number of boxes. I had cassette, CD, AM/FM tuner, turntable, + phono amp, headphone amp, and their psu boxes, all in a fairly compact space. My 72/140 didn’t have enough inputs for what I wanted to connect, so when the Uniti was introduced I thought that it would be an ideal.solution, and eventually got one. I haven’t been disappointed, happy to use on - board headphone amp.
When the CD drive of the Uniti 1 failed ( I am awaiting spares), I was pushed into upgrading to my current Uniti Star, and I’m very happy with that.
I have tweaked and twiddled over the last 40 - odd years, as and when I could afford it, and have a goodly collection of wires, connectors…and associated ephemera ( around four drawers full), in common with many other members, I suspect. But I only ever have had one system, so no multiple amps or p!ayers.