Every so often - (it varies between every 30/40 minutes and every hour or so) I hear a feint click from my system. I’ve never noticed it before and it doesn’t effect performance or functionality.

But I wondered if the cognoscenti on here had any ideas/experiences of similar?

It sounds like a relay of some sort perhaps? Is this normal?

It’s coming from my brawn stack consisting of 300DR + SCDR + Radikal (but I don’t think it’s the Radikal). Right hand Fraim in the pic below.

All boxes permanently powered up.

Any opinions or advice appreciated. 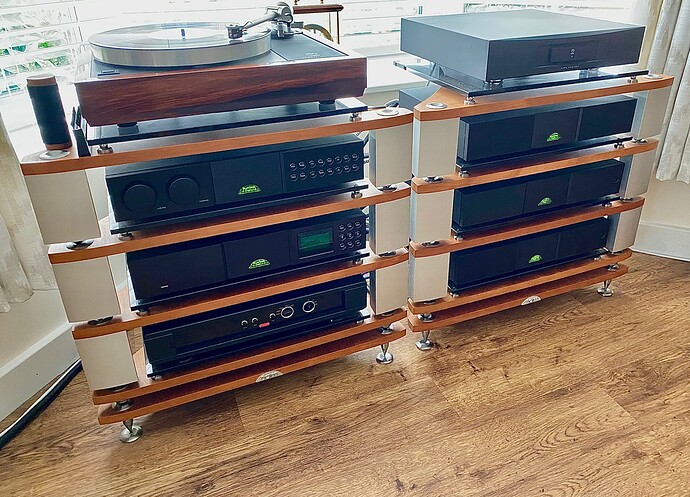 Maybe phone to an electrician? And power down all for precaution.
@Mike-B may help.

I’ve never heard a click from a 300 or a Supercap, and I don’t think they have any relays anyway. Why not try turning off the Radikal - if the click goes away you’ll then know where it’s coming from.

I don’t think there’s anything to go “click” within a 300PS, XPS or Supercap. As for the Radikal, I have no idea - does it use a switch mode power supply?

Is it a click you can hear through the speakers or just from the kit itself?

I believe the Radikal has a SMPS as used by default by linn.

Does not mean that it will emit clicks, at such a low frequency - hourly… General noise, maybe…

To me, I would be looking towards a Fridge or similar, for such an infrequent click…

In a previous life I had an interminable regular click that we traced to a neighbours thermostat that clicked on my speakers every time it came on. Don’t rule out an external (non hifi) source as the cause.

If you want to find out, (and hope to eradicate), you”ll have to be methodical, and given the timeframe, very patient.

Among other things I would time the recurrence to see if truly regular, as that might give clues (and if very regular some of the other steps are much easier as you’ll know when to listen). Is it from the speakers, if so both or just one? (You’ll have to put ear very close to each in turn to be sure.) is the click affected by the volume control (leave everything connected, just nothing playing)? Even if audible through the speakers, with the system on and volume right down is anything audible direct from the gear (put your ear very close to it)? What a positive to any/all of these checks may point to, and subsequent checks, are too potentially varied to be worth trying to detail before going through these.

Could you mute the system to see if it was actually coming through the speakers?

Given it’s regular, an external source like a fridge sounds possible.

I had the clicks every so often, even with the system turned off. I found out the coaxial digital audio output from the old Sky box to Ndac was the culprit. Changing to optical went some way to sort it.

That could be one check of value, cutting all sources and the preamp sections before the mute switch.

Thank you for all the advice and input. I think I’ve worked it out. It’s only happening when the central heating is on. We use Hive and until recently it hasn’t been needed. I’ll keep an ear out for it but it’s looking like the most likely candidate.

I used to get the odd pop/click through my system totally random at the time I was using Ethernet over Mains but one caught fire so I had ethernet cables run upstairs and round to the back of the house this eliminated th pop /clicks etc.

I do use Hive for heating control the hub is located in the dining room connected to a ethernet switch this does not interfere with the system at all.

With Hive you can turn it on and off from your phone. So you can probably sit in front of the stereo and replicate the problem. ie turn the heating on, advance to the next program

We have it and I’ve never noticed an issue. But the stereo is on its own spur

As I said I use Hive via iPhone,Ipad,Imac and voice control never had a problem stereo is on a seperate spur also.

Same here despite my (now-corrected) typo this morning