What should Prince Philip do?

The Queen has now sent a private message of support via a Lady-in-Waiting expressing her warmest good wishes and hope that all is going well.

Folloing a road traffic collision, most insurance companies make it clear that you must not admit liability, but let the insurance company deal with matters. Does this preclude showing any sort of sympathy with injured parties ?

What should the DoE do ?

Definitely not buy a lottery ticket it’s a double rollover this week!

You can express concern, and enquire after people, without admitting liability, and with some accidents - vehicle related or otherwise, that is the decent and humane (human?) thing to do, whether you believe it was your fault, neither party’s fault, or even the other party’s fault.

Show a little discretion (and maybe even a little humility) and not go out 2 days later without a seatbelt would be good start. Do the Royal Family think they are above such things? Princess Di appeared to as well. 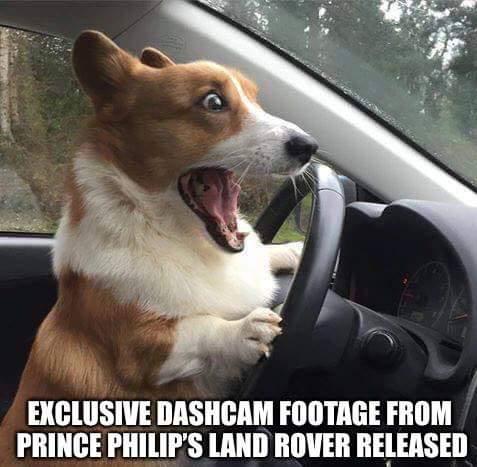 Well, he should wear his seat belt for a start!

Well said Bruce, it just goes to show how out of touch the Royals are with the rest of the average population.

The fact that the police are reported as saying that they had a word with the driver on the seat belt issues is also a bit worrying and I wonder if a member of joe puplic would have got away with the same offence so easily.

Apparently that’s exactly what he did at the scene of the accident, after being rescued from his own car.

A royal bod then contacted the family afterwards but it seems unclear what was said.

Clearly, saying sorry would be an admission of guilt or wrongdoing so he can’t do that.

A 97 year old having an accident is going to be cause for concern, however we don’t know full circumstances of what happened.

Only the passenger seems quick to have her 5 minutes I notice. Would like to know background of that.

I assume if he’s found to be at fault or guilty of a motoring offence, then he will face consequences.

He should just stop driving, like anybody at that age…

@jamiewednesday. I think you assume too much. He’s already gotten away with no seatbelt. Whats the bet (that if it’s his fault) he’ll just have to pay reparation and then just by magic the whole issue will just disappear.

I wonder if a member of joe puplic would have got away with the same offence so easily.

I don’t condone not wearing a seat belt, but apparently “a word with the driver” is normal. Possibly a £100 “on the spot” fine, but no points. £500 if it goes to court and you loose. Still no points.

A 97 year old having an accident is going to be cause for concern, however we don’t know full circumstances of what happened.

Exactly. However given that he appears to be a very fit (for his age) & if what we hear about ‘personality’ is true, then I suspect any talk of stopping driving is robustly rejected. Not an easy time for any family.
It brings to mind the almost fatal accident that HungryHalibut had, if I remember right it was a man aged 89 with defective vision - unlike DoE - the question of driving in old age & the time to stop is important.
But in the DoE’s case there really is no need for him to drive on public roads, OK drive around the private roads if he must, but leave the public road driving to staff.

It’s very easy to be critical of ageing drivers when we are young and fit. We all have our own views as to when “others” should retire from the wheel.

I am well past the age of unrestricted commercial air transport (60 in case you are unsure). I could have continued to 65 providing the rest of the crew were below 60. Canada, Australia and a few others don’t have these ICAO restrictions for internal flights.

Nonetheless, I still teach and examine full time. Subject to 6 month medical and frequent proficiency tests, which are basically the same as current initial skill tests.

So perhaps driving skills should be subjected to an annual proficiency test for everybody and an age related medical increasing in frequency with age.

So perhaps driving skills should be subjected to an annual proficiency test for everybody and an age related medical increasing in frequency with age.

He should do the right thing and hand in his driving license, which of course he will not.

I remember when I had to have that conversation with my Mum who was becoming a hazard to herself and other road users. In the end she realised her driving days were over and I sold her car and she gave the money to her grandchildren, which seemed a nice ending.

It is the duty of family members to intervene when an elderly member of the family becomes a danger on the road. Simple as that.

The highest proportion of accidents/mile travelled is in the 17 to 24 group and they are involved in 85% of serious driving incidents yet they are least likely to have a medical problem and to have most recently passed their proficiency test.

As a DVLA medical examiner I can assure you that the current system
is aimed at examining specific defects such as vision, neurological issues, cardiac risks or dementia. It would not serve as a general screening test. I think similarly the current Driving Test would be inadequate.

Before we invented a new age-based system we’d have to sure it was evidence based, we’d also have to fundamentally change the principles behind driving which make it a driver’s responsibility to declare their fitness to drive, not the state to catch them.

An regular vision check has always seemed reasonable to me but the current threshold for acceptable vision is a bit scary.

No single thing has ever brought me into more conflict with my patients than the issue of being fit to drive.

He could send some flowers to the other party. Maybe a signed photograph too!

I assume he has been invited to ‘blow into this’ as per standard Police procedure when attending an RTA.

He doesn’t need to admit guilt to get in touch with these ladies to enquire about their health and to pass on his best wishes personally. To leave that to some royal PR bod smacks of a couldn’t care less attitude.

He’s not an ordinary person so I don’t think arguing you or I wouldn’t do this stands up. He’s a very public figure.

In my view there should be annual retests once you pass a certain age and for people under that age who have medical conditions that could one day ultimately impact their ability to drive.

A sane and sensible response …