What type of transistor is the NA009?

NPN transistors are used for both halves of the waveform,

Which is at variance with @Richard.Dane’s posting that seems to indicate matched pairs of PNP and NPN :

the 009 is precisely matched from single silicon wafers into NA009N and NA009P.

I have no dog in this fight, I’m just quoting Art Dudley. But in all likelihood, back in the day of JV, using matched transistors from “single silicon wafers” was not an option. Actually, I recall reading in the early 90’s that Naim amps weren’t just class-AB, they were pure class-B. No doubt implementations have changed over the years.

The 500, being bridged, might have played by other rules.

Very interesting topic, its always fascinating to get into the “issue” with a certain technique and then see how the design unfolds. 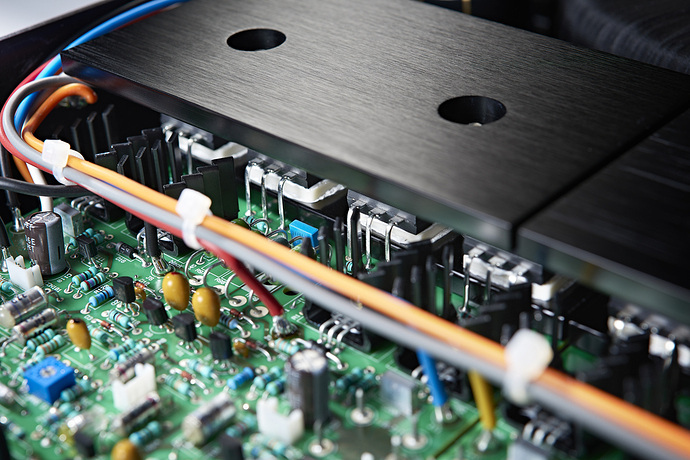 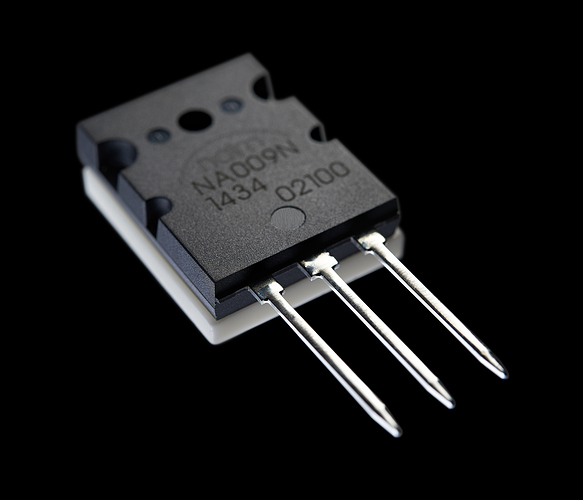 “Furthermore, the NAP 250 DR, NAP 300 DR, and NAP 500 DR are all now fitted with new NA009 power transistors, which Naim and specialist semiconductor manufacturer Semelab Ltd. originally developed for use in the Statement power amplifier. These are mounted on an aluminum-oxide substrate, for optimal thermal conductivity and significantly lower capacitance. During my visit, I listened to before and after examples of the three DR models. In my opinion, power amplifiers affect sound quality less than do some other component types, so I was impressed by the clearly audible improvements between non-DR and DR models across the NAP model range, from 250 to 300 to 500.”

To the best of my knowledge Naim haven’t used power MOSTFETs.

It is interesting that JV designed the Nait 1 using complimentary outputs and that was changed to a quasi design in the Nait 2. I still have a Nait 1. I have not researched those early plastic outputs. Do you have any information about them?

To the best of my knowledge Naim haven’t used power MOSTFETs.

Mid 80’s at the Linn/Naim-dealer in Stockholm - my friend asked about amps and if they had any using MOSFET.s … the sales guys went dead-quiet, gasped and then told him if he wasnt interested in music there was a hifi-store a few blocks away. As punishment they spent more than 30 minutes running in/out of the listening-room with a pre-mobile phone wanting us to hear how its presence killed the music (these were the days of the single-speaker demo). At the same time there was no denying how good their stuff sounded compared to the Hitachi MOSFET a few blocks away…

Well that is silly, MOFETs can equally sound as fantastic as bipolar … I spent some time as an undergraduate looking at this… it’s just the amplification characteristics are different… one is current based and the other voltage based… as well as a myriad of other considerations.

I am reading a book by D.Self at the moment, (btw, it is hard/slow progress for a old git like me) but he speaks about the pros and cons of Bipolar vs Power FETs in amplifiers. Lets not forget that much of what was done in the 60’s and which influenced the designs of the 70’s related to the capability of semiconductor manufacturers to be able to produce truly complementary Power transistors, I think this was one factor in Naim using the NPN devices in quasi complementary configuration.

The first power FETs that I got to play with were in the early 80’s, based on the characteristics of those early devices i can see why the young Naim Co. decided to leave them alone, however, I am sure that many modern amplifiers using today’s power FETs perform very well indeed.

My Nagra integrated uses Mosfet power,and to my ears it sounds better than my old 272/xpsdr/250 DR,so there you go.

I have some vague memory of early MOSFET:s having limited current capabilities.

It wasnt until Nelson Pass years later made some DIY-project I went anywhere near MOSFET:s

I had that amp in my bedroom with my old LS3/5a and some Linn-tuner I picked up s/h.

But time moves on, today the Linn Klimax Twin poweramp use MOSFET o/p devices, direct coupled signal path and a SMPS. And its a great amp.

I have some vague memory of early MOSFET:s having limited current capabilities.

Precisely, bipolars are current amplifiers, MOSFETs are voltage amplifiers … either is suitable for amplification of power. Bipolars have limited voltage capabilities… you design your amplifier appropriately.

It is entirely possible to design a power amp using MOSFETs as the output devices and make it have as much immunity form RFI as a pure bipolar device.

In fact it had better RFI performance than most pure bipolar designs.

My confusion comes from a misleading article I read online about the best MOSFET designs of all time and it mentions the NAP160. Which I assume, after this thread, is not correct.