What was the first vinyl you bought

Inspired by @Dreadatthecontrols & @Graeme who both happened to share the same first purchased vinyl, I thought other may like to share theirs, perhaps along with where and why.

To kick it off…

My first purchase was An Electric Storm by White Noise. Island records 1969. 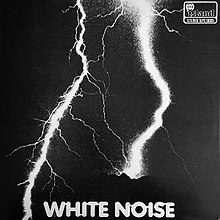 An Electric Storm is the debut album by electronic music group White Noise. The band recorded the first two tracks with the intention of producing a single only, but were then persuaded by Chris Blackwell of Island Records to create an entire album. At this point the group had established the Kaleidophon Studio in a flat in Camden Town, London, and spent a year creating the next four tracks. The last track was put together in one day when Island demanded the completion of the album. Although not very successful on its initial release, the album is now considered an important and influential album in the development of electronic music.

Recorded in the months immediately prior to the widespread availability of keyboard-based synthesizers, An Electric Storm might be one of the most painstakingly crafted electronic recordings of all time. Pieced together on improvised equipment via innumerable tape edits, this remarkable album is at once futuristic and unavoidably date-stamped, serving as a fascinating audio snapshot of a bygone era in sound generation and recording technology.

Bought in the mid 70’s from (the sadly no longer with us) Electrip Records in Rhyl which was stuffed with obscure vinyl and the smell of patchouli oil. No doubt attracted by the unusually stark record sleeve it was an instant purchase and played to death. Still have it today.

I received three albums for my 12th birthday in 1970 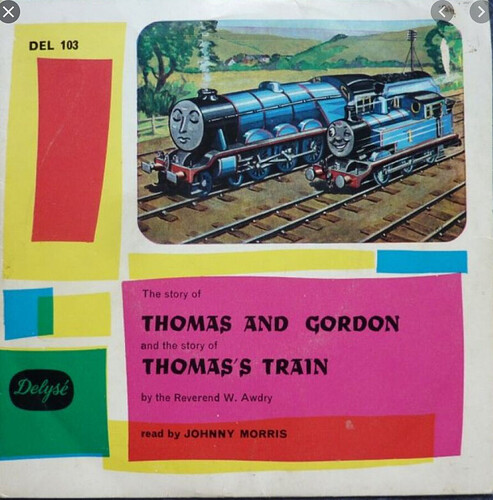 Thanks @0.0 brilliant idea for a thread.
If I may take a liberty and repost the source of your inspiration for this thread, as posted on WYLT2021…

The first LP I owned, the sleeve is a little grubby but the vinyl is still pretty minty, testament to how well I looked after my vinyl even from a young age. The original EMI inner is long gone though, pity.

Not an original but a 1973 issue.
I remember my dad taking me into town to choose a record for my 10th Birthday. I say “choose” because as I recall I actually chose Motown Chartbusters but the curmudgeonly old git wouldnt let me have it

I came home with this… 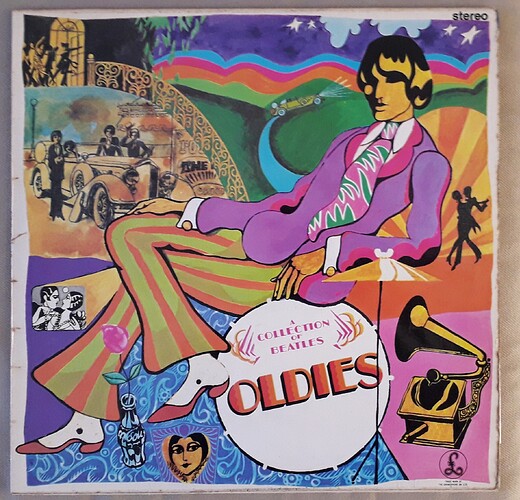 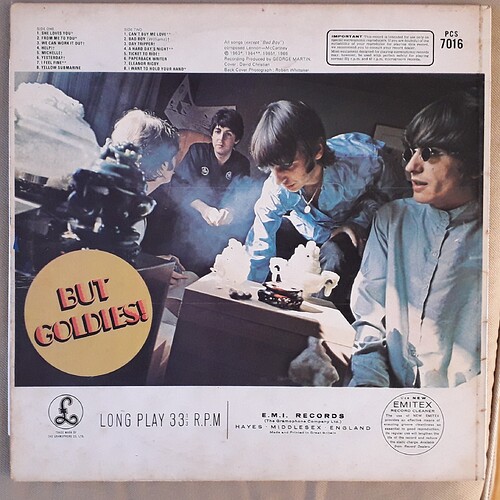 48 years old and playing like new, CD like totally quiet background not a single click or pop. Amazing considering the groove grinder Fergusson sterogram we used to have back then, until I was much older and earning enough to earn and buy myself some reasonable “hifi” 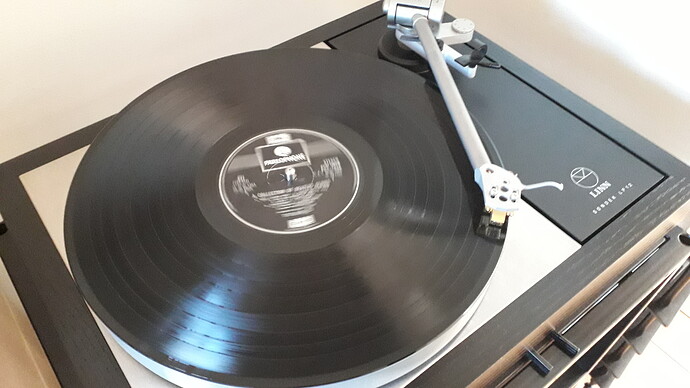 Original 1963 (the year of my birth) Mono pressing, gifted to me by my late uncle sometime when I was a kid.
Sleeve pretty manky ( I dont remember it being great when he gave it me) but the vinyl after a run through the RCM surprisingly good. Apart from some groove damage to track 2 side one which I’m not going to play its sounding very clean. Can definitely hear how these records were EQ’d for the playback equipment of the times though, theres a very noticeable cut/limiting of the Bass. (Edit, I compared to the recent AAA mono box set copy which confirms this to my ears)
58 years old, surprised how cleanly this is playing, no nasties 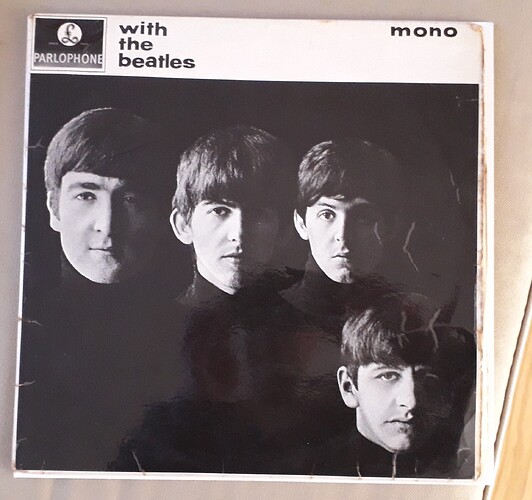 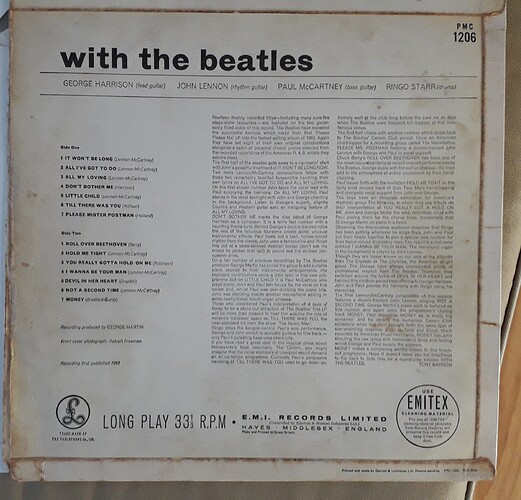 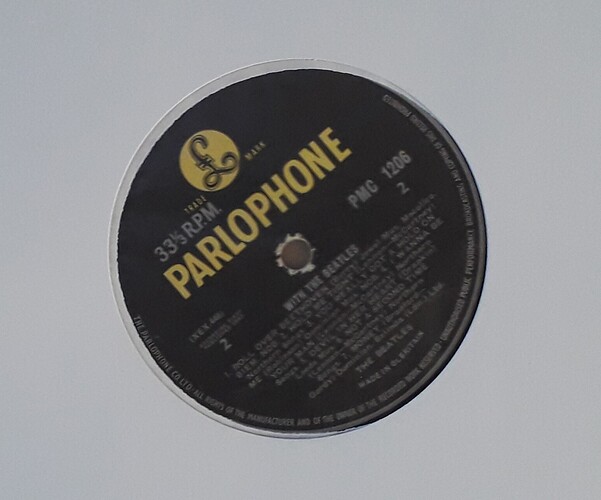 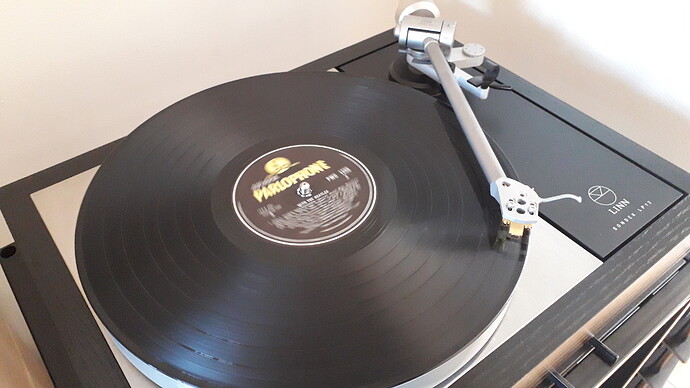 And just to add, proof that vinyl records do not wear out
Edit: couldnt resist playing the whole side one including track 2, so with fingers poised on the arm lift let it play, no problem played perfectly, no noise, nothing. The whole record sounds like near mint, chuffed!

Meaty Beaty Big and Bouncy
The Who

Electric Storm was fairly early in my collection, catching my eye in a record store, probably about 1970- and it is still in my collection, though now ripped, and gets the occasional play. I do rather like it! In fact as I’m working from home today i’ve just put it on despite the fact I don’t usually put music on when working…

Prompted by @trickydickie Thomas The Tank Engine post.
These curios from my childhood.
I was mad on Scalextric and found these in a junk shop, used to play them whilst whizzing the model cars around the track.
Cranked up, the roar of these vintage car engines blaring out of HiFi speakers is quite something.
I’ve never been able to find any information about these documentary recordings nor ever seen them since ( (Edit I just found a listing on discogs) 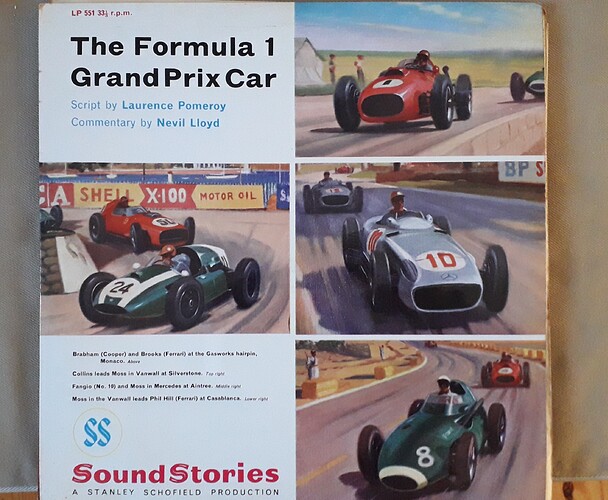 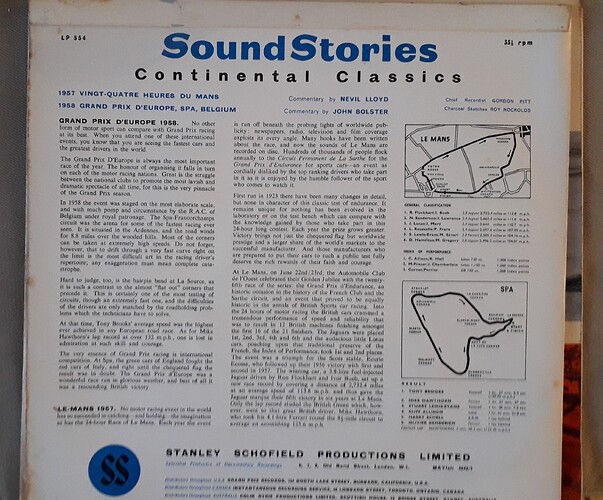 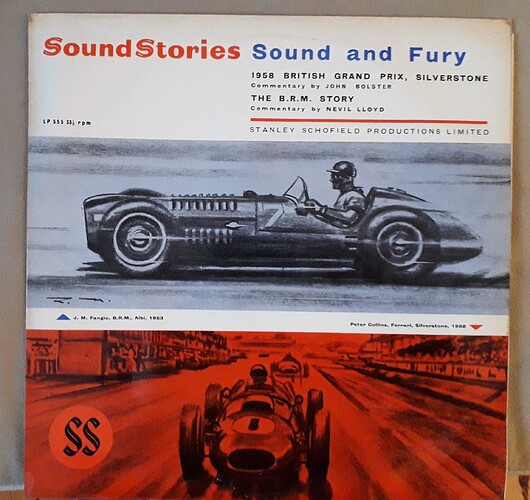 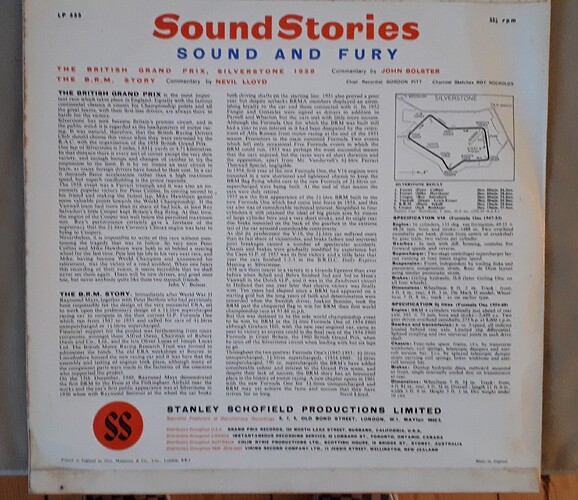 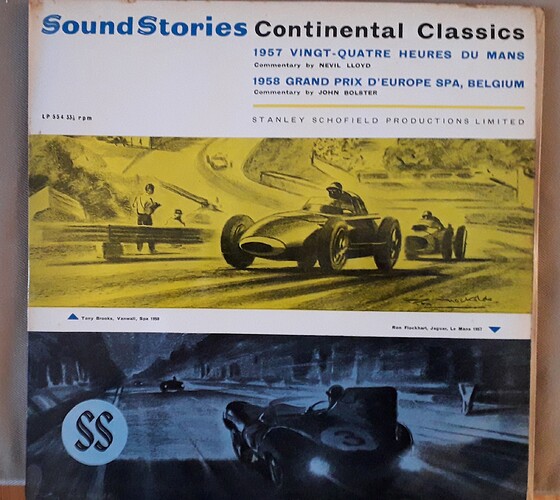 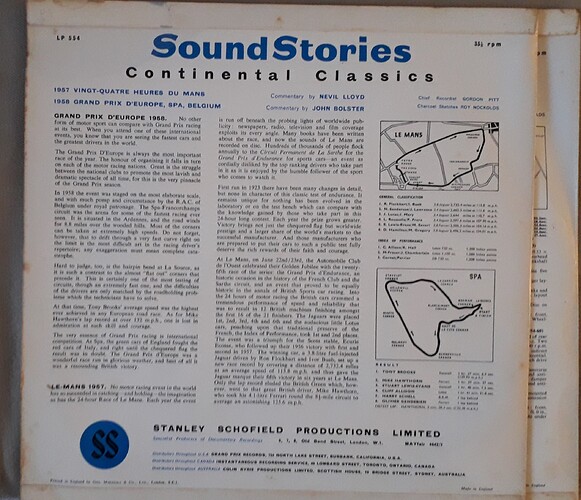 45rpm single bought from a record shop in Basingstoke with my pocket money, having listened to it in the booth. Still think it is a great track.

I had a copy of this many years ago - later a CD, and it now sits on my server. An interesting album…

Probably Rolf Harris (Tie Me Kangaroo Down) or Peter Sellars (Goodness Gracious Me), Chipmunks, Russ Conway. But in terms of proper albums, started with The Shadows, Sounds Incorporated - and later on The Pentangle. That was a Eureka moment for me - so unlike anything that I had heard before, and quite wonderful.

I thought it would be easy to recall the first record I bought, but actually I’m struggling. It could have been the Beatkes Get Back single in summer 1969 about the time I was building my first hifi system. I played it on my brother’s Dansette type record player when he was out, as I did some of his records, though I always got into trouble when he found out, until I learnt to memorise the volume and tone control setting and reset after I finished…

I think my first album was Abbey Road, getting it on the day it came out. Whether it was the first I bought I’m not sure, but certainly it was the first I played through my own first hifi system. When I bought it I still hadn’t finished building the hifi system, just in the process of building the speakers - so the day I got Abbey Road I made some makeshift speakers: using an armchair for each, I wedged the driver (8” full range) vertically at the front between the chair’s upholstered base and its horizontal raised seat cushion, and packed soft cushions around the sides of the drivers to close air gaps. On went the record. It worked! And worked well -the makeshift enclose had less colouration and better bass than the enclosures I built in the following couple of weeks! I was amazed, this was wonderful music, and fantastic sound. I can still “hear” it in my head at the start of side two, when the bass came in after the first few bars of Here comes the sun! 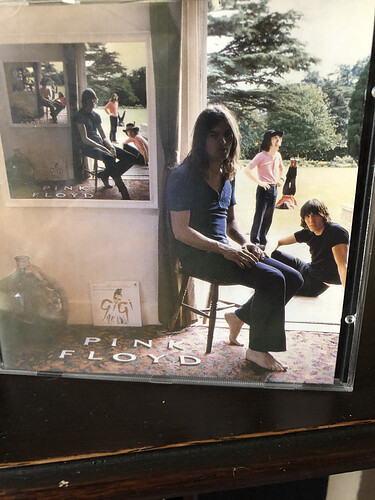 13, christened my Dansette with Blodwyn Pig Ahead Rings Out. Still with us although cover is very tatty and the drawing pin needle in the record player has done SQ no favours. 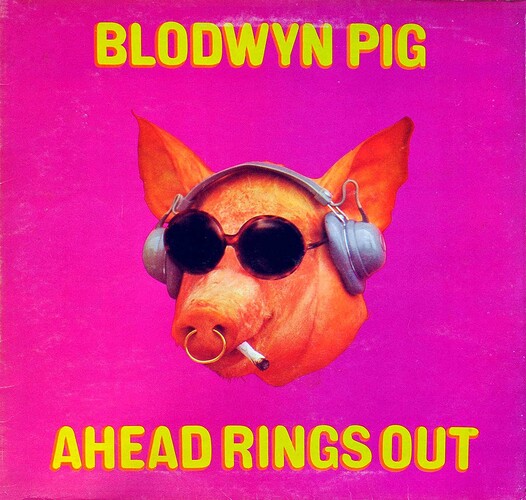 Banned by the BBC, wasn’t it?

Probably still the light programme back then.

Xmas 1975, this Geoff Love Orchestra/MFP classic was the first album I ever owned. Still have it… 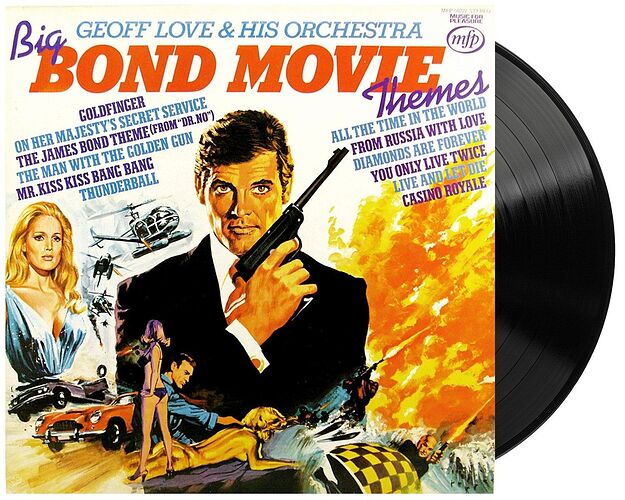 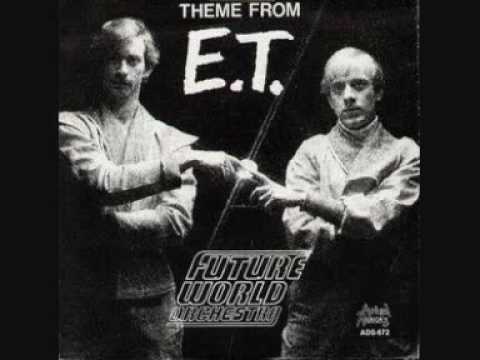 I had that! Probably bought around the same time, but it wasn’t my first vinyl record. Sadly, I no longer have it.