When the internet is down is your Naim streamer screwed?

Had a Uniti Star now got an NDX 2.
Never worked out how to run the thing when the internet service is down.
I had a look at the topics but poss not well enough.

So how do I access my music stored on the attached hard drive when my internet service provider has an outage?

Your ISP having issues shouldn’t affect your internal network. You wouldn’t be able to use a streaming service (e.g. TIDAL) but playing music to the NDX2 from a Network drive (NAS) containing your ripped music files will be unaffected.

Music on your hard drive is connected by your own network, and not reliant on the Internet, so you should still be able to access it.
If you gave any issues you could direct connect a drive to your USB port as another option

Your streamer doesn’t use the internet when playing local files, so it should work fine and I don’t understand why not. Are you using the internet access point as part of your link network between the streamer and store? If yes, when you talk about the internet being down do you mean that unit goes off or is faulty?

It may help others help you if you described, or better still sketched, what is on your network and how it is connected, including the streamer and store.

iPad won’t do much.

Thanks all you above posters.
Toby Jug’s post is short and somewhat cryptic but there’s something to it. Tell me more Mr Jug.
The streamer needs the app from a phone tablet etc.
My ipad doesn’t access the files on the drive via the Naim app when I get an outage. Perhaps this is cos of how my network is configured i.e. the wifi box (?).
Any further help appreciated but I think I’ll also have a good look at the wifi box and perhaps check online.
If only the internet and wifi had the simplicity of a tap. Turn it and water (or information in this case) always flows out. Blessedly simple.

I should have been clear that that’s how my set up is configured: external hard drive plugged straight into the streamer’s rear USB port

If your locl streaming network is configured, as per the attached picture (courtesy of @Mike-B) then it’s independent of an active or inactive internet connection.
Of course streaming from exogenous sources will not be possible when the internet connection is down. But your local NAS will be perfectly accesible. 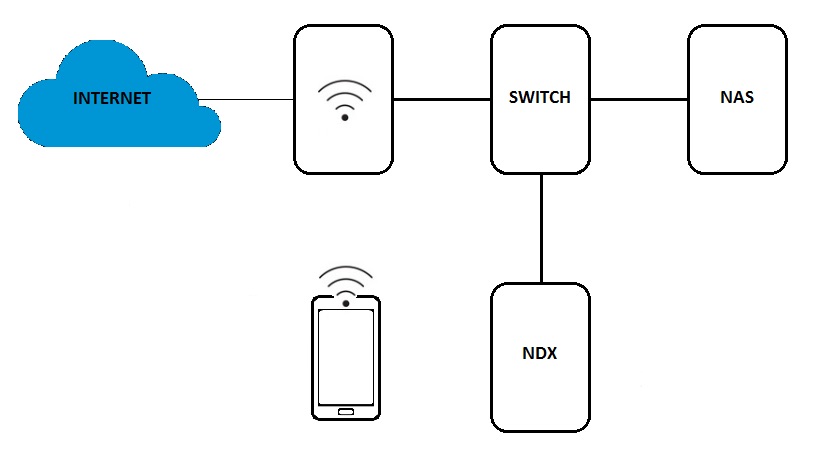 If I understood correctly the OP has the HDD attached to the NDX USB socket, and not networked at all(?)
And the iPad control is wifi from iPad to internet switch to NDX.

If that is correct, the issue might be the internet access point /wireless router somehow failing, rather than the internet provider’s actual internet service, breaking the wifi link from the control app to NDX.

Gramophone, i) does that fit with what you are doing and what seems to happen? and ii) have you tried controlling the NDX with its own remote and the inbuilt screen when the internet is down as you put it?

I have found in the past that using an ISP supplied router to run your LAN could cause your own network to grind to a halt when your internet connection is lost. Clearly this should not happen if correctly configured, but…
I use my own network hardware with a connection to the router used solely for its internet connection, and do not now have this problem.

Where it can go wrong is if something is up with the DNS server from your ISP, so you might still have an internet connection but cannot get anywhere, including your network. At least this has been my experience.

I have twice tried Cloudflare 1.1.1.1 as its apparently great but for me at least it works for a few hours then my entire network goes tits up cannot even get to the router page

With some android devices when your internet connection goes down on a Wifi connection, the phone will default to mobile data which also routes Naim app comms through mobile data. I problem that I have struck a few times when trying to set up Mu-so on Wifi. Disabling mobile data fixes this issue, not sure if it’s the same here but might be worth trying.

if you are refering to me, I use Untangle for a router and advantage of this package is that it will output to a connected display so I was able to goto the router there, change the DNS back to google and within seconds everything was good again.

Sorry garyi, my question was meant to be addressed to the OP. Gramophone originally wrote

“So how do I access my music stored on the attached hard drive when my internet service provider has an outage?”

and I asked how he checks that the internet connection is not working properly when he happens not to be able to access the music stored on a drive in his LAN.

Your iPad doesn’t need the internet… to control or access servers on your home network you don’t need any internet access. The internet is your WAN for remote services, your home network is your LAN for locally hosted services, and your router simply connects between these two domains or networks. These two networks are quite seperate.

Therefore your internet being disconnected for whatever reason should not affect your local media playout on your home network. If it does it suggests something in your home network is not set up right and potentially could be unsafe and you should get it addressed.

Clearly if your internet service is disconnected, you won’t be able to access remote services and platforms, unless you connect via an alternate internet access service such as 4G etc.

Hi @gramophone,
Yes I think it is possible that your local network is impacted by an internet outage.

In my case my internal client machines (Lan) would not get a renewed DHCP lease because the internet (WAN) was down. I solved the issue by allocating static IPs to some devices. (Fileserver, Kodi, ND5 XS)

I concluded (but don’t really know for sure) that my router got confused when the WAN is down and NAT, Firewall and DHCP server are either caught in restart loops, or are all scripted to start once WAN has an IP.

This is a bit left field, but seems to fit with my issue.

When I was on holiday in a remote part of Cornwall with my Core and Qb last year, the router (a newish BT home hub) often went offline and restarted. This could take 5 mins before the Qb could see the Core again. So the music stopped and started again some time later. And then the hub would restart to try to re-acquire the broadband every five mins or so until it was successful. It was a pain, but not really worth me trying to get the broadband sorted in a holiday cottage. So now I take a wireless router with me too and set up an ad hoc network separate from the broadband.
Best

David - ‘Ad-hoc’ does mean something quite specific in wifi and network speak - so to avoid any possible confusion I guess you are saying you setup a standalone LAN in your holiday home - and don’t route it to the internet - which is absolutely fine - and I some times do this when testing equipment as well.