When vinyls invite themselves

I just bought a very entry level Audio Technical TT to my teenager daughter who seems to have great interest in vintage music stuff.
So I also bought her a first 33 vinyl. Doing so, the emotional side of my brain took over and I bought myself two vinyls… I don’t even own a TT. It’s been years it tickles me, look like I just put my finger the mechanism.

I’m currently using a Qute but I’m hunting a Superuniti in second hand market, and much later I’ll go for a Nova. P3ESR are the speakers. For me, at this time, it’s really for the fun of it (and the beauty of TT), so I was thinking for a simple and easy setup like a Pro-Ject with integrated phono but most probably the Rega P1 Plus.
But now there is that P3 on second hand market at the price of the new P1 Plus.

My budget a little stretched was the P1 Plus which is almost 1000$ Can.
P3 means I need to add a phono. But I need to stretch even more then.

Thanks for your help!

OK, you ask about a budget phonostage, but what’s your budget for a phonostage?

Some years ago I had the entry level Dynavector phono stage (no longer made), then the entry level Simaudio Moon 110LP. They were really great for MM/MC high output cartridges, but I moved on to low output moving coil and had to step up the phonostage game, which is a bigger investment (what a rabbit’s hole that is).

FWIW: the Nova converts analog input to digital, and then back again to analog for output to the speakers. If you are really interested in analog source (i.e. records…a.k.a. vinyl) you might want to keep that in mind. I’m not sure whetehr a SuperUniti (older generation) does the same.

Thanks for the reply and info.

Good point about the analog getting to digital in the Nova. Will have to check on my Qute and for the future SU. And if so, does it defy the purpuse of getting a P3

Nova analogue does convert to digital, no big issue. I use an FM tuner into analogue on Nova.
SU doesn’t do a conversion in the same way. I have both. Only real difference between the two is style and extra streaming options, namely Qobuz. Watch for display on SU, they are prone to fail if they have been left on during use; app still works fine, but update or system settings is somewhat tricky.
If you acquire Nova and have kept either Qute or SU, you can multiroom a TT to these units. IIRC while multiroom is available on SU (and Qute), it is only available for digital inputs, iRadio or streaming local or via internet.

FWIW: the Nova converts analog input to digital, and then back again to analog for output to the speakers. If you are really interested in analog source (i.e. records…a.k.a. vinyl) you might want to keep that in mind.

Might be of relevance to an analogue zealot, which the OP’s description doesn’t suggest he(?) is, however people’s surprise after happily using without noticing has suggested it doesn’t change the character of vinyl - which, as has been discussed before, is unsurprising because the vinyl character comes from the vinyl production/replay process, while a matched DAC-ADC done well doesn’t noticeably change the sound.

I have a Nova , a Clearaudio and a Graham Slee Reflex as phono stage- the Nova produces a good quality sound and I wouldn’t worry about it being converted from analogue to digital to analogue .

I suspect most of my vinyl recordings these days are recorded digitally , converted to analogue then played on an analogue turntable and then changed to digital then to analogue - - at which point having written that I want to lie down .

It doesn’t seem to make a great difference

It is possible to get one of the Japanese turntables that has all the built in electronics to produce either a digital or phono stage, in fact I think Rega have a R1 which has a built in phono stage

Feeling Zen has a lovely TEAC that does all that , and if I remember rightly it was then tweaked to a higher standard, this is similar 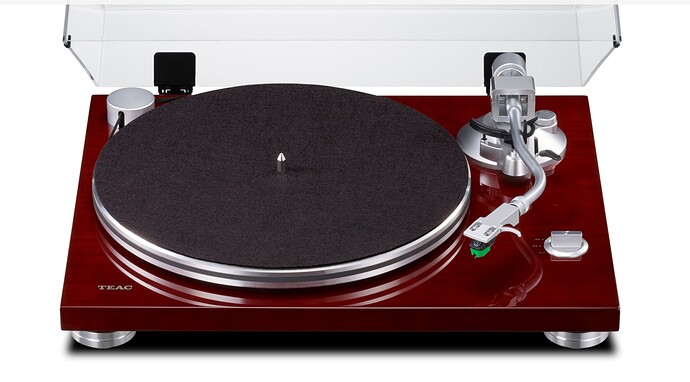 The SuperUniti doesn’t digitise the analogue inputs (while the Nova does).

Thanks all for those info and clarifications.

here the original questions.
Thanks!

Rega do a reasonably cheap phono amp at around £100 (UK). This has picked up good reviews (in, for example What Hi-Fi) and performs well for me with a Nova and Rega P3 - it’s got the memorable name of Fono Mini A2D Mk2 (note the only difference to the Mk1 is the casework - if you can pick one of those up at a lower price you’d lose nothing performance wise). It’s only a few inches big so easy enough to hide.

It also has a USB output (44.1kHz, 16 bit) so you can rip albums to digital if you want - I’ve had decent results doing that too.

Thanks for the info!
I’m dealing for a P3 second hand right now. In a day or two I’m confident to put my hands on it for half of the price for a new. I’ll definitely look for that phono!
Thanks. I’ll follow up.

Indeed @Ian2001 . The one pictured is one model down. I have the direct drive one up. Has a built in phono stage and USB digital out.

But it turned out to be a fantastic machine. Responded well to a higher end (but still entry level) Sumiko cartridge and third party linear power supply.

The only reason I’m not buying another for the main system is because it would feel odd to have two identical turntables.

My sister recently bought the same TEAC. Such are the warm and fuzzies you get from the silver on walnut styling when plopping on an old Marvin Gaye.

I would certainly go for that over a Rega, on pure looks alone.

Agree with TallGuy, the Rega Fono Mini is exceptional for the money. I use one in my upstairs system on all my vinyls.

And to further clarify things, “vinyls” are correctly more commonly known as records, 45 records, LP (Long Playing) records. They are made of vinyl, and are currently (wrongly) referred to by this term. We have been calling them records, LPs or 45s since the 1950s.
So now you know.
Enjoy your records.

I have always called them albums too, and used LPs, records, albums interchangably.

Me too. My children mock me because I refer to specific “tracks” on an album. As in “side 2 track 3 is amazing” etc🤣

My response was intended for the OP, but the current fad for using “vinyls” is vexing me, and I just felt the need to respond, to help other newcomers. Hopefully, but I doubt if it will.
I mean, will CDs be known as plastics, or digital opticals?
Rant over, I have to turn an LP over to play the other side.

FWIW: the Nova converts analog input to digital, and then back again to analog for output to the speakers. If you are really interested in analog source (i.e. records…a.k.a. vinyl) you might want to keep that in mind. I’m not sure whetehr a SuperUniti (older generation) does the same.

It’s implemented very well and personally I don’t think it’s an issue, in fact LP12 via phono amp to Nova impressed me so much I started upgrading my LP12 and buying more vinyl than for a decade or more.

It was simply fun and very enjoyable in the context of that system. I’m perhaps less enamoured with vinyl now used via a NAC 282/active SBL setup (SBL/Epos hybrid but that’s another story!).

As I don’t have other Naim streamers I don’t know but I believe the digitisation allows for multi-room playback whatever the source.