Where are all the bees 🐝?

The garden’s looking lovely but we seem to missing our usual insect visitors. Normally at this time of year, the lavender would be bouncing with bees but not this year. We have a few bumble bees, but the solitary bees and honey bees aren’t around. A few weeks back we had a reasonable amount of activity in the hot weather, with honey bees on the flowers and resting on the wet pebbles around our garden fountain but since then, and with the unseasonably wet weather, it’s noticeably tailed off. Hopefully just a temporary blip…

Maybe the quite autumn weather can explain

They’ve been very sparse in all the gardens I’ve been to. The prolonged cold and wet through April and May won’t have done them any favours. And when the weather finally turned in June they didn’t suddenly appear en masse. I planted a big drift of alliums and there were very few visitors. They are starting to appear now on the Foxgloves, Knautia, salvias … The echinops isn’t far off flowering which they normally love. As yet no sign of the leaf-cutter bees either. As you say, hopefully just a temporary blip.

My garden is awash with bees. I hope yours return soon

That’s good to hear, we have a hedge in our garden that is normally buzzing with Bees but there have been very few visitors this year.
I even built a Bee house for them this year. Fingers crossed they will be back soon.

My garden has flowers that bloom from March through to September with different flowers available each month for the bees to feed on. I’ve designed it in a manner that caters for their entire feeding cycle and it also attracts a wide range of different pollinators including various insects and butteflies/moths. I sincerely hope that your bees return soon

Many bees in our garden too this year, more than in previous years!

I’ll send a few of them over to the UK to help out, and will ask them to bring some friends as well.

My mother-in-law says she has lots of bee visitors to her garden just outside Newcastle. Our London bit of backyard gets Bumblebees (I let the Californian Poppies run rampant as they seem to like those) but only now are the bees getting up to speed, one or two at a time through the day…as for total numbers, who knows? Could be different bees each time!

There used to more, for sure. I miss the time when they lived in our wall by the back door. That was a good summer.

We’ve got loads this year, mainly bumble bees. In fact some bumbles nested just outside my study window a couple of months back.

Our Echiums are covered with bees.

we lost about a quarter of our bees a month ago because one of the two hives swarmed (our attempt to prevent it by splitting the colony spectacularly failed!). A week later I went and collected a swarm (not ours) from someone who had one settle on a bush in the garden, so that’s now in a third hive hopefully building strength.

I was at Great Dixter a month or so go and they had a large Cotoneaster - never seen so many bees - going mad for it.

Seem to be plenty in my garden on Kent coast. Quite a few bumble bee nests.

in abundance this year.

I agree starting to appear now.

Oh yes bumper year for tadpoles and young frogs so far - really quite impressive - perhaps helped with the wet spring.

We have loads of bees in the garden but I haven’t seen one wasp this year.

Our cotoneaster flowered well this year, but attracted very few bees. Again I assume this is because of the poor, damp spring weather. Not that we have a large or diverse fauna living in a rather exposed hillside location, but we still try to provide some extra wildlife habitats where we can. 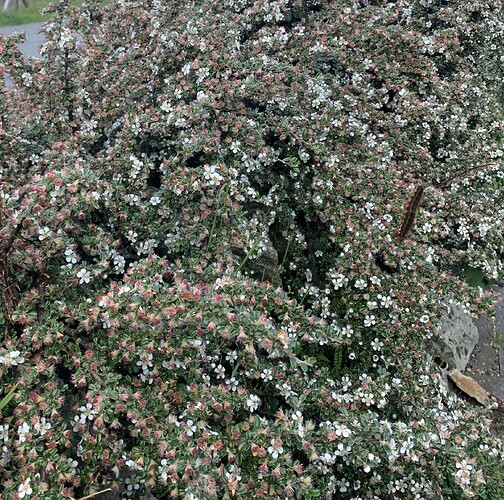 I notice when there is plenty of rape planted locally , the bees disappear

I am very keen to have my garden as wildlife and bee friendly as possible - not having a bumper year for bees, but I have been out less, due to cold weather .

Garden getting away from me , this year -

Plenty of fertiliser, herbicides and insecticides spayed on rape, and not least, it is sprayed with something like glyphosate to desiccate the crop prior to harvest.

Rape yields have declined recently, largely because of the flea beetle.

We have plenty of rape fields locally - the local estate says the only time/ place it uses a herbicide is on the cricket square .

But plenty of spraying going on . In some ways they are pretty good, masses of Ancient Woodland and bluebell woods

Lots of bees this year on the ceanothus (can never spell that right). And more birds possibly.