Where has my bass gone ? Allae & Nait XS mismatch?

I have recently hooked up my Allaes’ to a mark 1 Nait XS, everything sounds fantastic apart from the bass, the bass is there, can clearly hear basslines and bass drums … but there is no bottom end oomph …

Could it just be down to the shape of my listening room, which is a rectangle with a rectangle bay window at a right angle ?

This sounds like a possible room or positioning issue. Allaes are definitely capable of some trouser flapping bass (perhaps too much in some situations) so I would suggest experimenting with different positioning or placement.

What amp (and source) were you using before you bought the Nait?

And the Allaes did have bass oomph previously in the same room? Are the Allaes and the listening seat in the exact same positions and the room unchanged, and the only thing that changed is the amp?

Are the Allaes in the bay window by any chance?

The earliest ones are already due for servicing.

deleted as answering the wrong member.

The XS amps aren’t known for their wide bandwidth handling.
A few favourite tracks I used to like playing had rolling deep bass lines, that 2/4 of the bar was great, the rest went silent.

I have tried the Nait XS with some Ruark Talisman 2s … which have better bass than the Allaes, however not as good with midrange and treble … 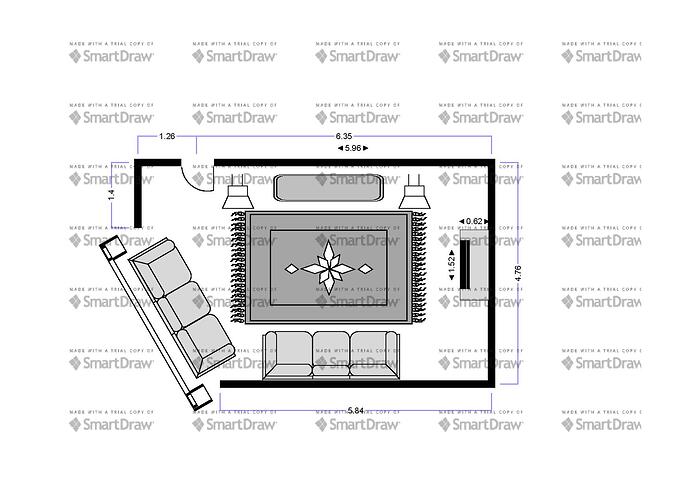 Thanks for the sketch.

IIRC Naim recommend 10-45cm behind the Allaes to the wall. Try moving them back towards the 10cm minimum.

Out of phase should be mentioned.

Theoretically my loudspeakers in one of the sets are wired out of phase, but I have tuned them by ear and now they sound right. I think there is something wrong with an interconnect.

@EmCee Any joy yet?

Have checked all wiring and placement in the room. It improved but not massively, I think my auld ears have changed ( deteriorated ! ) and need more bass these days … I took a bold step which will prob get me booted !

I have introduced a Schiit Loki tone control to the chain, with a slight boost to the 20Hz range, this has made a welcome noticable improvement, without killing any mid or high end …

Ok, understood. I am a bit surprised though because I would expect the Allaes 10cm from the wall would give a pretty full bass and fast, open mid range and highs.

The perceived lack of bass makes me ask what are your sources?

The Naim xs. Is 70 W the arcam 100w, may have a bearing , I had an arcam delta 290 I found the arcam sound “warmer” than the Naim xs I compared it to at the time, I ended up with unity 2. I also had ruark talisman 2, in combo with the arcam amp it was very hard system to improve on imho.

That may be the issue, the arcam/ruark pairing is pretty special, maybe my sound preferences have moved away from the classic Naim sound.

I tried to like Allaes, but in my room to my ears the bass was weak. It might be fine for jazz and classical but dub reggae was not enjoyable and Phil Lesh was awol.
It’s not just you.

For what it’s worth I agree with pev999.

Personally I think the Allae is one of the prettiest speakers out there and so beautifully made, that I tried everything to make them work in my room, but ultimately I had one note bass from them in 2 different rooms.

The bass was strong and full but only at one or two specific frequencies, and then was none existent the rest of the time which was very distracting.

I moved to a large pair of stand mounts which have a front firing port. Much better!