Where to call it good?

Right now enjoying John Lee Hooker via the iPad Pro in lossless. Swapped out the Rega for the CAL Sigma tube DAC & quite pleased…

The 5italic is my first NAIM amp & well- pleased… I needed something more substantial than the 1986 Cyrus amp I’ve enjoyed since new.

Based on what you already have I’d get a better streamer sorted before I looked at power supplies for the Nait. The airport is ok but it’s really no where near even something like a bluesound node… the Dac is ok so a streaming set up either add to what you have or flip the DAC and get a better one box digital front end…. The Naim is the obvious partner but there are plenty of others that would be a good fit with the Nait and the MA’s…

SuperNait is a good upgrade especially if you can add the Hicap DR. I would not go for the flatcap.

I would agree with both the above offerings of advice.
The Node is in my view the best all in one streamer at its price point.

The Node is in my view the best all in one streamer at its price point.

The Node is a popular choice because it looks nice and it’s quite user friendly, but technically it’s not one of the best performers (even at it’s reasonable price point). If someone is looking for the best sound quality, which most people on these forums likely are, it’s good to consider a few other options as well.

Chart below shows that the Node is not a particularly well measuring performer, it falls in the bottom (red) category on another website dedicated to performance measurements:

I agree with Neil. At its price point, it is very convenient and good value for money. Even if it compares less well on that site (which I believe seems to be a bit zealous about technical measurements rather than simply listening to the equipment in the real world), it is not necessarily bad.

We have a few Bluesound devices that can be used by any member of the household for simple multi-room listening with any source they want, e.g. CD rips, high-res downloads, radio stations and streaming services.

I agree that the DAC used in the Node is not the best implementation in the world, but it does a decent job for background listening.

Besides an NDX, I also use one of our Nodes as a transport into an nDAC/555PS. I prefer the NDX, but the difference does not seem huge to me.

That cynicism is a bit misplaced i think.

At its price point, it is very convenient and good value for money. Even if it compares less well on that site (which I believe seems to be a bit zealous about technical measurements rather than simply listening to the equipment in the real world), it is not necessarily bad.

Sure when only using it as a streamer it’s fine, although you are also paying for the DAC section then ofcourse. There are other options such as the Primare NP5 that lack the DAC but instead add other features such as Chromecast, which could be preferred by some for convenience. Here is a picture of a Primare and Node together: 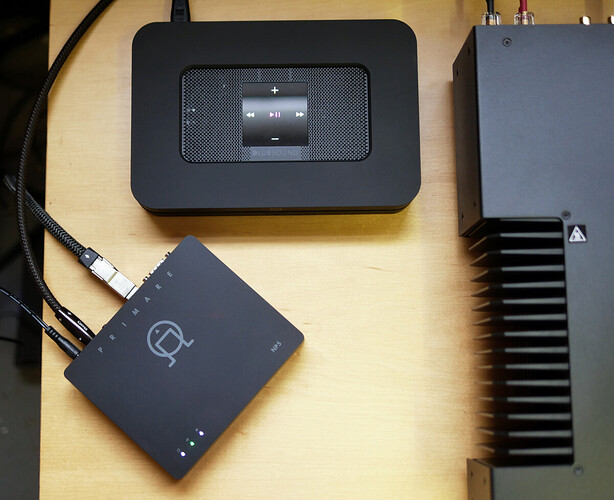 When using as both streamer and DAC, then the Node objectively underperforms compared to a number of competitors in terms of noise/jitter/distortion, and when looking for the best sound quality it would not be a bad idea to consider alternatives. The Matrix Mini i3 Pro for instance costs only a few hundred more but performs much better (objectively, you may still prefer the Node for subjective reasons).

I also use one of our Nodes as a transport into an nDAC/555PS.

May I ask which connection you use between the Node digital out and the nDAC? I tried this some time ago, but suspect that maybe the cable I had for the demo (Chord shawline Clearway RCA - BNC) might have been a factor that didn’t let the nDAC perform at its best. I’m tempted to try again, but with optical TOSLINK.

Naim DACs and streamers are optimised around coax rather than optical, so I’d be very surprised if you got an improvement from Toslink. Easy enough to try, though.

Thanks ChrisSU, that is good to know!

I find it both interesting and good that someone goes to the trouble of measuring these devices to distinguish the good from the bad.

However, I’m not sure that this guy is measuring the right thing or enough of the right things.
A very, very long time ago, amplifiers were ranked for total harmonic distortion, as that was the measurement that apparently mattered. As a result, the large Japanese electronics manufacturers produced amps with amazingly low levels of THD, yet they didn’t sound very good. Things have moved on since those days.

I had the pleasure of trying an RME ADI-2 Pro FS dac in our system a little while ago. It ranks right up there as one of the absolute best measuring dacs, according to the gentleman who conducts and publishes those test results.

How did it sound? Nasty.
Bright, relentless and tiring in our system at the time. Thoroughly unpleasant. This was feeding our then Naim NAC52/SC/NAP135 amp and current speakers. Our Naim DAC-V1 and Chord dac both sounded a whole lot easier on the ear.

Perhaps I listen to music the wrong way, or perhaps his chosen measurements don’t correlate well with perceived sound quality. It reminded me of the amplifier THD rankings of the late '70s and early '80s.

We live and learn.

I have both the optical toslink and the coax connections to the nDAC with inexpensive cables that I had in my box of bits. The plan was to try them out and then remove the one I like the least. That test is still waiting to happen because I usually listen via the NDX and I do not really have the time for experiments at the moment.

The Node was originally installed in this system for a Qobuz trial, which is also still waiting to happen.

If I did not have the NDX, I would make the effort to explore possibilities with the Node, which is still in the system because I happen to have it and it is still occasionally used for multi-room sessions.

How did it sound? Nasty.
Bright, relentless and tiring in our system at the time. Thoroughly unpleasant. This was feeding our then Naim NAC52/SC/NAP135 amp and current speakers. Our Naim DAC-V1 and Chord dac both sounded a whole lot easier on the ear.

The RME ADI-2 Pro is not primarily intended for home use, since it has a lot of tuning options that are specifically for studio environments. Having said that, it is completely adjustable to personal taste since both the DAC filters and the parametric EQ are user adjustable, so you can make it sound however you like.

I agree. I had the Node long before I discovered that it apparently performs badly under laboratory conditions. Whether something else measures much better does not really matter to me. The Node might not be the pinnacle of audiophile enjoyment, but it is convenient and sounds OK to me for its intended purpose (multi-room for the family and background music) and cost.

I could make the effort and compare it to my NDX2, but I do not expect any surprises and I cannot be bothered to disassemble and rebuild stacks of Fraim to confirm that the price difference between the two of them is justified.

Yes… you would buy the one you prefer the sound of in your system and in your listening space, simple.
Please don’t tell me you would leave a product in the shop ,even though you think it sounds brilliant, because the figures are crap?

If figures are that critical to sound, why do we sometimes listen to music with our eyes shut?

Please don’t tell me you would leave a product in the shop ,even though you think it sounds brilliant, because the figures are crap?

You’re twisting my words aka are strawmanning.

No I’m not. Read your post, that’s exactly what you are saying.

I understand about the parametric EQ filters. Mine was set to neutral, so no tailoring at all.

I do not mean to be funny about this but how do you tune spitty, relentless, tiring sounds into smooth, harmonious and yet still revealing? Chord, Naim, DCS and MSB all sound the latter in our system. The RME was the former. I struggle with the idea that spitty and relentless is good because it is “pro gear”.

YMMV, in which case best wishes with whichever route you choose to enjoy music.