Where to place my headphone amp

As I have an imminent XPS DR for my NDX2 streamer I don’t have enough rack space.
I will need to place a component on top of another one (aghast!) rather than on its own shelf.
Will have - 3 power supplies, 282 pre amp, 250DR power amp, headphone amp and NDX2 streamer.

I though that the headphone amp would be the obvious candidate. Manufacturer states -

So… stick the headphone amp on top of the pre amp or maybe the streamer?
Or any on the other boxes I could stack?

Ps. I can’t physically fit another shelf in.

How much space is there between the floor and the lowest shelf?

If your headphone amp is connected to your streamer’s Digital Out, makes more sense to stack on top of Pre amp. The headphone amp can be off when using the Pre amp.

Not enough to put anything

Yes, that was my thought, either the pre amp or the headphone amp would used at a time. Although I do leave all the boxes powered up.

Where’s the NAPSC? If that’s taking up shelf space, it can be on the floor behind the rack if needed. 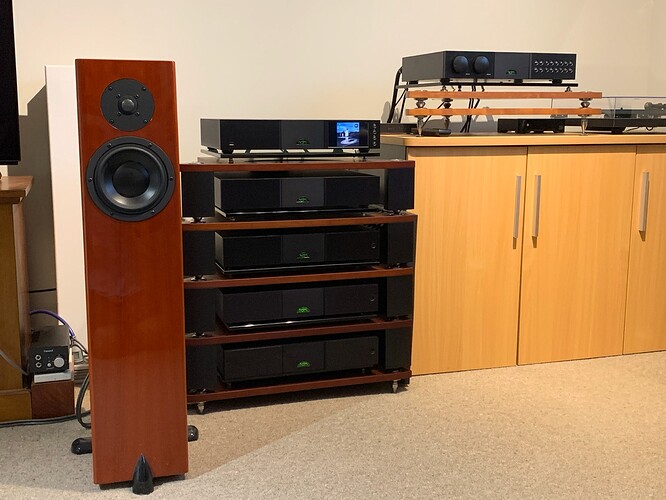 The NAPSC is on the bottom shelf beside the HiCap. I could move it but it wouldn’t free up a shelf

I’m running mine off the RCA outputs of the NDX2. It seemed more logical to me going direct rather than another link in the train going through the 282.
I’m interested in your experience with this.

Yes, like you, I thought it was logical to run from the NDX2 RCA outputs to my Heed Canalot, being more direct and with less changes in the signal chain. I ran this setup through 3 different amplifications (SN2, 252 and now 552) using the fixed volume output setting on the NDX2.

Anyway, last year the NDX2 developed a fault and to diagnose it, I swapped the connection from the NDX2 to my 252 from the DIN output to the RCA. This confirmed a fault with the DIN output on the NDX2, a stuck relay, that has now been fixed. Anyway running the RCA to the 252 was not as good as through the DIN, which then raised the question as to whether using the RCA was actually the best option for the headphone amp not accounting for different cables, the RCA were silver from Audio Sensibility, the DIN being Superlumina). After discussing this with my dealer recently after getting the 552, he suggested that running the signal through the 552 might be better, so we decided to try it. He made up a custom DIN to RCA with the record-out wiring that is needed and when I put it in, it was, indeed, quite a bit better and I’ve stayed like that. The UI is easier as you don’t need to change app settings and just swap the connections through the buttons on the pre-amp. So, it’s a win win.

Now, I’m not really sure why this is the case and can only assume that either the DIN output on the NDX2 is much better than the RCA output, so that less is lost going through the DIN and pre-amp, or that the 552 somehow processes the signal in some way that brings out more of the source material.

Appreciate that Mike.
I’ve only just received my new upgrade RCA cables today! Sod’s law!
I’ll let things settle down with the XPS DR which arrives tomorrow and then I’ll look at getting a DIN to phono cable to try going through the 282.

Richard has mentioned that only one output should be used at a time. Both can impact sound quality.

I’ve not tested that theory but of course signal ground from both output to different endpoints would be joined and that’s not a good thing. In fact, even with RCA simply disabled in settings, just having interconnects hooked up to both DIN and RCA would still link the signal grounds.

My Headline fits nicely under the Fraim base, which is good as there’s not really any space for it elsewhere