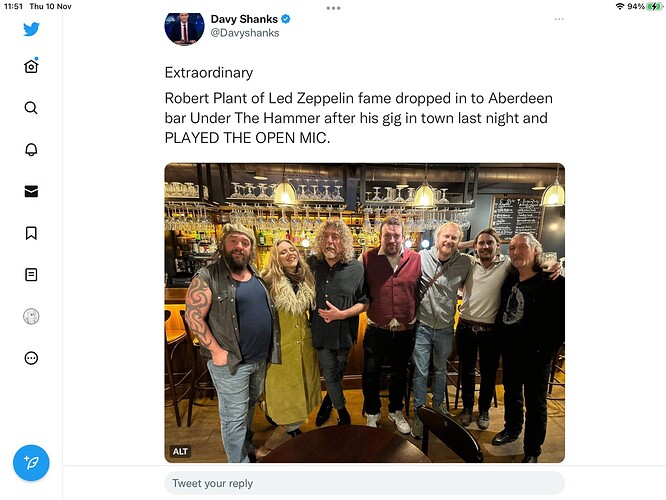 Last night at my best mate and I’s old student haunt in Aberdeen. I wasn’t there yesterday but it did remind me that said friend and I were stood right next to Robert & Jimmy for a few (half) pints in Soho’s French House in 1987. A very annoying Canadian woman was desperately trying to get their attention whereas we left them to enjoy their drinks. When they’d had enough of her and turned to leave they gave us a nice nod, as if to say ‘thanks for not twisting our lemon’…that was enough for me.

A very very long time ago as a party yoof I was around a particular set that included Bowie, Donovan, various Stones, long john baldry etc ( You can see how long ago it was) Some spoke, some just slept

Best was sitting at a bar next to Paul Simon in a folk club. I did my best not to notice and totally ignored him until he spoke. He seemed a nice bloke back then. More recently I’ve been in hotels or aircraft and seen actors more than music stars.

I’m in NYC and involved (not on stage) with an off-Broadway theater company, so I’ve met a number of well-known writers, actors and some musicians, most only briefly.

My favorite story goes back about 15 years. My brother is a bigger rock fan than I am, and his favorite artist is David Byrne - Stop Making Sense is the only video he owns. My brother was my guest for an opening night. A few days before the event, I discovered that Byrne was going to attend. I did a little begging, and when my brother turned to see who was sitting next to him, his jaw dropped.

As for Paul Simon, I once attended a reception hosted by his brother. Paul put is a brief appearance.

Not very many. I used to help out at The George in South Molton when they had various performers on and went to the arts centre in Torrington, where the performers came out to the front of house to mix with the audience, so met a few then - Hazel O’Connor, Show Of Hands, Peter Knight, Wizz Jones, Baka Beyond, Sam ‘Spoons’ of Bonzo Dog Doo Dah Band, Ivan Hussey, Eliza Carthy, Martin Carthy, Dave Swarbrick, Norma Waterson, Furnace Mountain, Sild, Gigspanner, Maddy Prior, Carrivick Sisters, Steve Knightley among others come to mind - not in Led Zep league, but more my kind of music.

I “met” David Gilmour at a bar in London’s Soho some years ago, he was ordering a drink and I said “hi David, can I have a word please?”. He said “I’ll give you two. f*** off”. No answer to that really.

Aw Gawd, from the sublime to …

Chris De Burgh was hugely popular in Ireland at one stage in the 70’s (long before THAT terrible tune), was great live in concert and was also a customer of the Bank in which I worked so when I saw him at the counter one day I had to pop over for a chat. He was really very friendly (hey, I was young and innocent!).

Also met Hazel O’Connor after a gig in my local theatre a few years ago and she was really nice.

Not quite in the same league as you guys, oh well.

Both dead chatty, down to earth, nice people.

Oh hang on, does this count?

In the same bank, I was working away in our deposit department one day when one of the girls came over and said that there was a guy at the counter who wanted to take money out of his savings account in another branch of ours but that he did not have his savings book or identification with him.
She said that he was a musician.

I looked up and saw that it was a young Larry Mullen (drummer with an up and coming Dublin band who had just released their first LP, which of course I had). They were called U2, I smiled and said to her “Maureen, give him as much as he wants”.

My musical stars highlights were that I got to shake the hands of and briefly speak to both Nick Cave and Andreas Vollenweider.

On the science side it has to be Richard Dawkins.

And actor highlights would have to be David Tennant, Robert Englund, Neve Campbell, Brent Spiner, Christopher LLoyd and Ian MacDiarmid.

And have autographed mementos from most of these encounters that I cherish.

I did work in the Entertainment industry for 35 years ….

Noting that ‘met’ has inverted commas sound it, then Liza Minnelli a couple of times on the Upper East Side in NY, Paul Newman on 5th Ave, Conan O’Brien on the F train, Kristin Davis outside a hotel, Eva Mendes down near Wall St., Sanjeev Bhaskar, James McEvoy while flying, Chris Barrie in my local curry house, Rowan Atkinson at Goodwood and George Harrison driving his McLaren in Henley on Thames.

None of them requested my autograph.

Many years ago got to talk to Lemmy a few times in random pubs, amazingly he remembered chatting with me and he once bought me a pint.

I have a couple of friends who are relatively well known, got to know them through mutual friends when they weren’t working, just doing normal human stuff. Mostly I didn’t know they were famous until someone told me.

Once I saw Ian Hislop in my local, many ears back, at about 9.45 on a Friday evening just after seeing him on TV, which was a bit surreal. 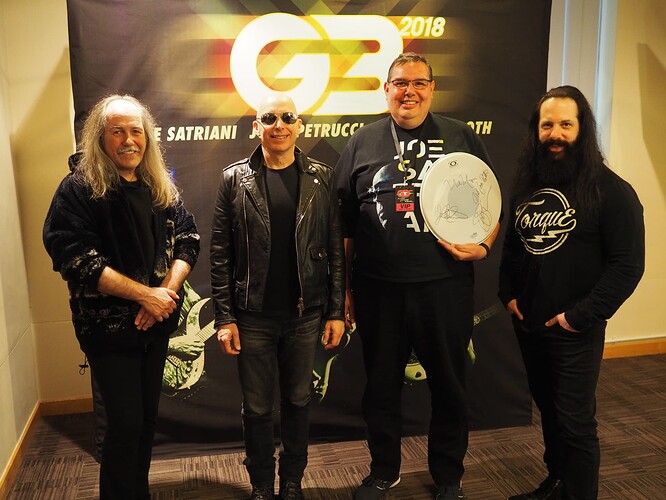 E09D55A1-AF65-4CB2-A990-52516075431C1920×1440 195 KB
I have met several of my favourite musicians over the years including, in no particular order;
Joanne Shaw Taylor, Joe Bonamassa, Stone Broken, Dan Patlansky, Kris Barras, all of Cats in Space, Rick Wakeman, Eric Steckle; Adam Ant (long, long ago and rather forgotten) and the group of gentlemen above. From left Ali Jon Roth, Joe Satrianin, (me) and John Petrucci. I won a Planet Rock competition where the prize was aVIP Experience at the Joe Satriani G3 gig at the Birmingham Symphony Hall in 2015.
What a fabulous afternoon, a wonderful group of people and to top it all off, a fabulous concert.
4 Likes
Innocent_Bystander November 10, 2022, 5:00pm #14

whereas we left them to enjoy their drinks.

That’s what I do, whether it is drinks or anything else: If I recognise someone famous I leave them be, not even seeking to look at them after becoming aware of them, nor get involved in any way. Once or twice I’ve met the gaze of the person just at the moment of recognition, my action at that instant if it is someone I appreciate is to give the slightest of nods, or if I have a glass near my lips I raise it in silent, almost imperceptible toast.

Many years ago got to talk to Lemmy

On one occasion when I went to see a band at the Marquee Club in London (the old Wardour Street site) Lemmy was at the bar when I went to get a drink. A group of people who knew me were around him, and upon seeing me they tried to introduce him to me, telling him I was the DJ who played Motorhead and Hawkwind they were telling him about. I simply smiled, said hello, and went back to my wife with the drinks. I don’t think Lemmy was impressed by being pestered by a group of fans while enjoying a night out himself.

One more tale - this time regarding classical artists. I hosted a dinner for Sabine Meyer and the Tokyo String Quartet. They had jut finished a concert, which included the Mozart Clarinet Quintet.

But that’s not the good part.

My girlfriend at the time had been trained as a professional clarinetist. Although she had changed careers, she still kept up her clarinet. As she approached her 50th birthday (is girlfriend still correct?) I wanted to get her something unique. I knew the people in charge of the concert series. They reached out to Ms. Meyer, who agreed to give my girlfriend a private coaching session on several Schumann works she was rehearsing for a private recital. I had to force Ms. Meyer to accept a fee, and the hour long coaching session ran to nearly 90 minutes.

Just remembered a dinner with Brian Cox (actor) - Lots of people at it but I was put opposite him for the event. Very convivial chap.

This has nothing to do with meeting stars, so look away now, good people, if you’re after excitement. But this is a tiny bit of trivia about a very famous musician.

The Israeli-American violinist Itzakh Perlman has a famously deep voice and had a tiny spoken part (a few words only) as a jailer on a Decca recording of ‘Tosca’ many years ago. I don’t have the recording, but Perlman does (apparently) get mentioned by name in the booklet. I suspect that the recording producer may have been playing a game of some sort.

Nothing to do with my ‘meeting’ with him noted above Graham’s post.

I didn’t notice your reference to Mr Perlman when I typed my post, so that’s a bit of a spooky coincidence! (The chances of that happening randomly must be very, very long indeed!)