Hi all. I use Tidal via Roon. I listen to a variety of music styles, from soul to jazz, from rock to classical, and even some opera. This forum is amazing for suggesting music that is new to me, but with classical music how does one pick the ‘best version’ of a particular piece?

As an example I like a piece called Marche Slave by Tchaikovsky. I first heard it in the early 1980’s when I bought the Andre Previn/LSO 1812 Overture/Romeo and Juliet/Marche Slave album on vinyl (EMI I think), and I loved the piece and have ever since - in fact the whole album was brilliant, I think I wore it out!

Now I cannot find that particular performance on Tidal, but there are lots of other versions, but without listening to them all, how does one know which is ‘best’ or even the best place to start?

This morning I listened to the Abbado/BPO version and it is not a patch on the Previn (to my ears, tastes and memory), so how do you good folk go about finding ‘the best’ versions? Is there a bible out there or a review/comparison website that you go to?

Back before I had kids and my career hadn’t properly kicked in, I had time to read The Gramophone, which was very useful. I see that for £90 pa I can get online access to their Digital Archive and Review Database, that might be worthwhile, but before I splash out I thought I would ask what others do

Would be good if Roon or Tidal had reviews… Or maybe they do and I haven’t found them.

Any suggestions, is it simply a case of Googling around or subscribing to a specialist site like The Gramophone?

The ‘best’ version in terms of how it is played can only be a personal choice (unlike sound quality, which to some extent may be more universal).

There are, or used to be - it is ages since I bought one) catalogues that give comparative reviews of different versions of classical music, often rating them by whatever criteria.

Sometimes at least, the best to any individual might be the first they heard that they liked - for me that applies to Schubert’s Trout quintet, which was a 1950-something mono recording as released on Ace of Clubs in the 1960s, bought by me in about 1969 - and I’ve never heard another version that sounds as good in terms of performance, though plenty that have better sound quality than my well-worn vinyl disk now preserved digitally. And another for me is Beethoven’s Egmont overture, which now is an ancient memory, going back to playing my parent’s 78 on a wind-up gramophone, but never as good in any version I have heard since!

I guess the fun is exploring!

I agree with your theory on your own first version. I have never heard a better Dvorak 9th Symphony than Antal Dorati/New Philharmonia’s version on Decca, which was my first and is still my favourite, though Colin Davis/Concertgebouw Orchestra also has a very good stab at it, another early version for me!

Also explains the Previn’s Marche Slave, unless I just got lucky, first out of the box.

Just listening to both Abbado’s and Karajan’s versions of the opening movement of Beethoven 5th symphony.

One was OK, the other was staggeringly good; fuller, greater pace, more dynamic, grabbing me by the back of my neck and dragging me along with it as if I was galloping through a forest, greater range and virtuosity and urging me to keep listening… and I could hear more going on, I heard the orchestra playing as one, driven forward by a man, Karajan.

There is a lot in this versions thing. Much more important than Atom versus SN3/NDX2… Source first?

Sorry for answering my own thread, but there is some help on Tidal/Roon, just found it: 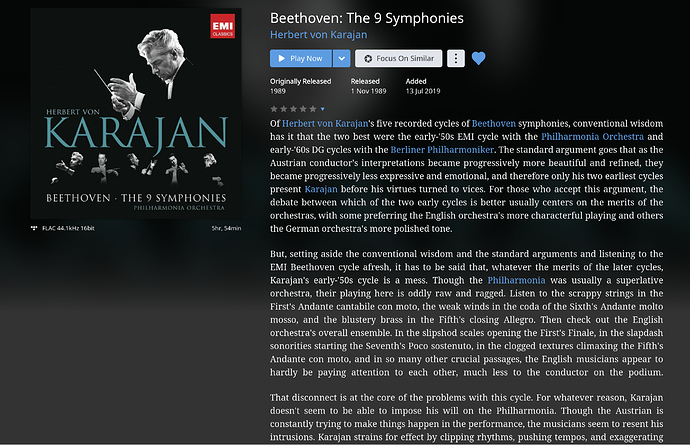 The Penguin Guide to Classical Music used to THE reference that I used. Unfortunately with the decline of the music industry this too has succumbed, the most recent one I could find was 2010.

2010 was the last one issued. Copies of that particular issue are rare. I’m glad I bought one at the time.

Yes that’s tge catalogue I was remembering - I had a copy back in the 1990s, and good classical music stores used to carry the latest that one could consult in the store.

Together with Gramophone’s Classical Music Guide (last released in 2012…), which was excellent too. The Gramophone site is far more confusing.

There is no such thing as ‘best’.
It’s what affects you the most. Just listen.
For example, I just adore The Tchaikovsky Violin Concerto by Christian Ferras and Karajan/BPO - but the general ‘web’ view is that it is too kitch.
Of course, the web bandits are all wrong…

I have old copies of the Penguin Guide, the Gramophone guide as well. I also look at recordings on Amazon and see the reviews there. The Rough Guide to Classical Music is very good imo, as it discusses the works and then gives you the best recording. And it is I think current.

I am wrong, the Rough Guide to Classial music is no longer being updated BUT you can buy copies on Amazon for next to nothing. If I only had one guide this would be it.

This is obviously true …but, with so many recordings leaning on proper experts, rather than internet pundits, can help you listen to acknowledged great performances & recordings.

I agree, it is what I as the listener thinks that matters, which is why I put ‘best’ in quotes.

What I am trying to achieve is a narrowing of the field. So if Tidal has 20 versions of a popular piece, then maybe a top five by expert reviewers can give me a head start and save a lot if time

I might dip into the others but starting with 20 is daunting and a bit boring.

Thanks for all the comments - looks like I am eBay-bound!

Whilst I don’t pay for any online streaming service myself, an online service that stocks numerous different performances of classical pieces must be a good way to assess which is “best” for any individual taste, or to identify varios versions that maybe suit different moods, or for study.

You can always look for the piece in bbc radio three’s building a library section.

The magic is in the tension Perlman manages to keep so well throughout the whole piece.

I use a combination of my old 2008 Penguin Guide and BBC Radio 3’s Building a Library. Back in the day, it was worth finding out which of the various ‘bibles’ coincided best with one’s own taste. Rather like with Hi Fi reviews, it was possible to find the same recording lauded by one reviewer even as it was being excoriated by another. I found the Penguin reviewers mostly in line with my taste, though they were far from infallible.

Building a Library uses a different reviewer for each piece, which can make it even more variable and they have started to acknowledge this by referring to the process as ‘so-and-so makes a personal choice…’. However, it is more or less unique in that the reviewer plays extracts from each recording as they explain their thinking so you really can hear the differences they’re talking about, and disagree with them if necessary.

Specialist sites that still sell classical CDs are often very good about saying which discs scored good reviews in their day - if a disc is described as winning a Penguin guide rosette and being chosen by Building a Library, it’s probably worth your money.

so how do you good folk go about finding ‘the best’ versions? Is there a bible out there or a review/comparison website that you go to?

Listening is the only way to find out what’s best for me. ( this is why at one point I owned 50+ versions of Beethoven Piano Concerto No.1. And counting ! )

but there are lots of other versions, but without listening to them all, how does one know which is ‘best’ or even the best place to start?

I use an old Penguin Guide and the Gramophone Lib not to find the “best” but to find an interpretation in the ballpark of what I usually prefer. That has worked o.k.

The trouble comes when you try to find it. Many interesting composers and especially contemporary music is/was released on independent enthusiast labels, special series on public grants and so on. And those recordings are not available from the streaming/download companies on the net. Usually you can hunt them down (most often in CD format).