Which wine are you drinking? Tell us about it 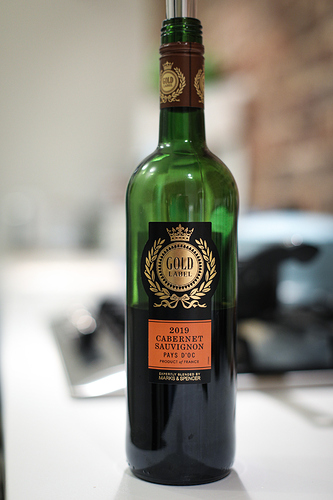 I should say at the outset this wasn’t my choice and came in a twelve pound meal deal from M&S. It described itself as ‘smooth and rounded’ and it wasn’t wrong. I thought it overly chaptalised but it was ‘only’ 13% when I was expecting more. It was perfectly likeable with the food we had, not the meal deal. Maybe a bit of tannin and a bit of acid (dare one say it, character?) was a bit too much ask at this price. [rhetorical].

Though I must seem critical, I quite enjoyed it for what it was.

Slightly OT, as I’m not actually drinking them (nor have I drunk them) at the moment. However, this weekend I was helping a friend to clear out some of the outbuildings at her Mother’s house. In a dark dank corner of one we found the remains of the wine cellar. Sadly, the promise of bottles of Romanee Conti didn’t materialise (possibly the rats drank it instead) and there were plenty of others that looked well over the hill and far, far away, however, we did uncover some that were possibly OK, but worth saving whatever - some Chateau Latour and Chateau Cheval Blanc. As a reward for my hard work… 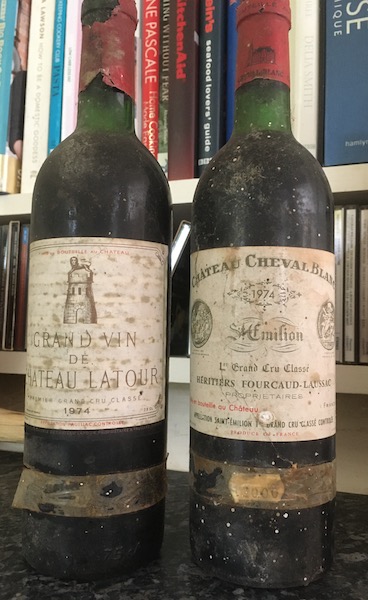 Gawd knows how they have held up, '74 not being a classic year, but the levels aren’t too bad. What do the experts here reckon?

Levels look great and labels suggest nicely humid conditions for storage. They should be great! Shame it isn’t a wonderful vintage, but wine of that calibre certainly has the requisite staying power and ability to surprise…

Thanks Rod. I know that Cheval Blanc has a reputation of being not only very long lived but also of surprising in how well it can stand up to very long cellaring. And of course Latour is… Latour! I’ve had the “70 and the ‘78 Latour and they were both wonderful. I doubt the 74 will get anywhere close, especially after so long. The fear is that they will disappoint, but it’ll be interesting finding out… 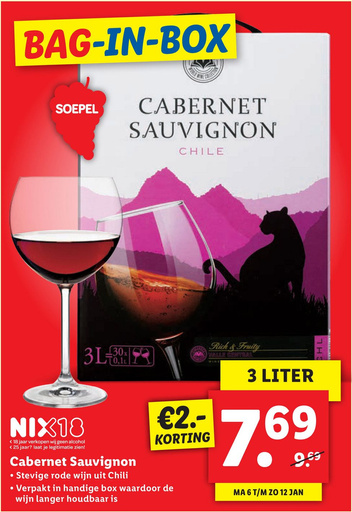 This was my summer wine. Seven euros and a bit for three litres.

Better than all the organic wine I tried.

I have always looked down on these boxes, but I won’t do that again.

6 posts were split to a new topic: Wine storage - How do you store yours?

Wine in a box was popular here in the 70s, the wine was quite drinkable which was the problem lots of bang for your buck.

My wife spied the exact same box today U.K Lidl priced at £15.99…yours is a bargain!

We are in our new apartment and waiting for decorators to come and finish wine storage area . 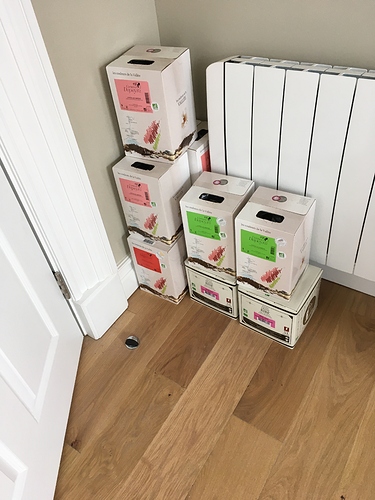 IMG_18113024×4032 2.07 MB
Have just unloaded car …a few bottles and some bag in box .
We find bag in box very good value but needs consuming fairly promptly
Remainder of my stock is in storage unit but as we are quarantined it will be staying there for a while. 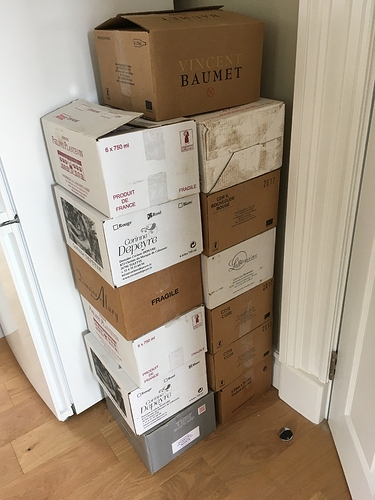 Trying not to be a snob here, but €7.69 for 3 Litres implies:
Exploitation of workers (Chile’s agricultural workers can claim for minimum wage, but this is paid by ‘point’ rather than hour, and usually entails twelve hour days, it’s a Pinochet-legacy scandal - arguably the single greatest catalyst for the ‘Fair Trade’ movement.)
Inclusion of Herbicides, pesticides, ‘Mega-Purple’, artificial yeasts, enzymes and nutrients to support them, PVPP (Polyvinylpolypyrrolidone) (and probably a lot), added acid, and precisely the maximum permitted (and probably a lot more than that) of Sulfur Dioxide (Sulfites).
I would taste it, but I would be genuinely concerned and reluctant to swallow it.

I can only suspect that you have drunk some truly crappy organic wines.

I’m off to listen to some old D120 cassettes on my Matsui ghetto blaster, because it sounds better than anything Naim have ever made.

I have tasted some pretty mediocre organic wines in the past .
We buy from local independent organic vignerons who
we know well and respect and trust.

Weekend starts now …
The Beyer I drank from the same vintage Last week was a bit flat, but this Josmeyer has more life. Just the thing to accompany a frittata (courgette, mint and goats cheese). 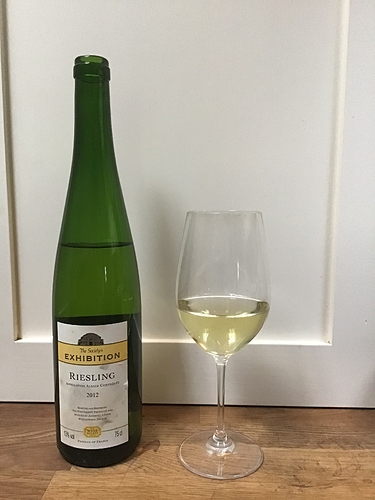 I have 2 bottles of Penfolds Bin 707, the 2002 … Paid for by a generous settlement from my former employer for the way they sacked me …

I bought them for £50 a bottle, a few years later I checked and they had more than appreciated in price, then I ran into the guy who had sold me them . I remonstrated with him for his lack of arm twisting not to have bought at least six. …

Problem is how do you find an occasion to drink one …

The Monte Santoccio amarones that I have had in the past have been very good as have the ripasso. The winemaker worked with Quintarelli I think (or so Swig say in their notes!). Not seen the declassified one before.

I bought a case of 2010 vintage 707 after a Wime Society tasting with Peter Gago. A bit steep at £150 a bottle but it has doubled in value so I suspect the likelihood of me drinking a bottle is almost nil!

And that’s a good question, when do you actually get to drink these exceptional wines ?

I live on my own , deep in the countryside and they are just sitting there as people would have to drive to come here.

A few (like the 707) will end up being sold, but the majority is for personal consumption, preferably shared with friends that share the appreciation. Pre- crisis enjoying offline meet-ups with other participants of the wine forum I am on offered a way to share some of the better bottles. Until things settle down I am sharing with some of our neighbours and the past few days with a close family friend, including these two which proved especially good. 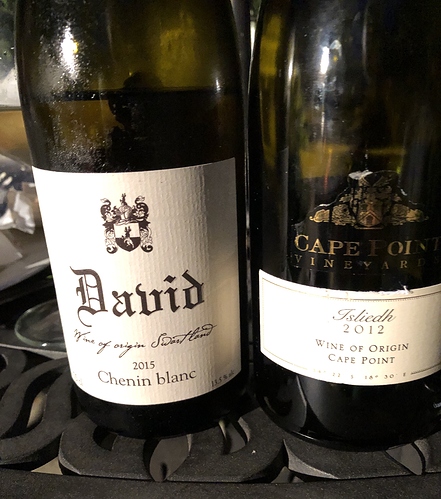 And that’s a good question, when do you actually get to drink these exceptional wines ?

I live on my own in a small town, when friends visit they usually stay so we have lovely wines with dinner. I also now drink wines whilst on video calls with friends, as you’ll see above one friend of mine and I have a selection of the same clarets and share them. I also used to shamelessly drink a bottle of fine claret or Burgundy on an occasional evening while listening to music on my own, my increased number of video calls triggered by COVID means I don’t do that any more.
The few wines I have at the very high end will be drunk with my dearest friends when we have something to celebrate. (Although having checked the market price of my 2 remaining bottles of 1996 Roumier Amoureuses, that will be a very serious special occasion.)

I think it was a one off in 2014. Nicola Ferrari thought it wasn’t good enough so didn’t declare but changed his mind! I am currently drinking my way through a case of his ripasso which I just love. In many ways an easier wine to drink

I very much agree with you the ripasso as it is much more accessible. I also 2 bottles of his 2010 passito which I am hoping will be good.