Which 'Wish you were here' SACD

Apologies for not answering your question but instead posing my own: which, from your research, is the best SACD version of Dark Side? I only just realised there were versions since the 2003 release - which I’ve got - so I’d be interested to know what you’ve found.

Hi Ebor,
No problem at all, the general consensus of opinion was that the version considered the best by most people, including some mags was the one in the image attached. The the important bit is the cat.no. Of course PFR24 etc. I bought it from a shop called ‘Chalkys’ on a site that starts with ‘A’ and ends in ‘mazon’ the engineer who created it worked with the Floyd for quite a while and the production is superb. 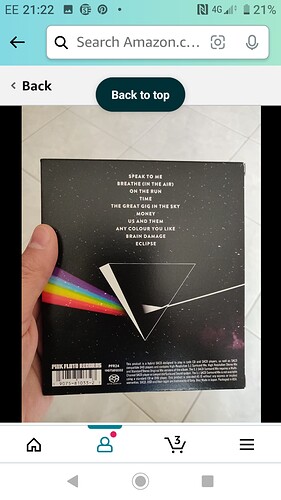 Ah, that’s the recent one from Analogue Productions/Acoustic Sounds released last year in the US, right? I’ve got the more common 2003 release with the James Guthrie 5.1 mix.

According to an article on superdeluxeedition.com and posts on the Hoffman forum, the 5.1 mix on this recent release is the same James Guthrie job as the 2003 release. I don’t suppose you’ve done a comparison and can comment on whether you hear any difference?

Hi Mark, I wish I could help you with a comparison opinion, but never heard the 2003 version you mention. I do recall however that some people were unhappy with the sound quality of the 2003 version, but that could just be personal opinions? Where do you go from here?

As far as I can tell from the wisdom of the internet (so, well, y’know…) it was the 2.0 layer of the 2003 release that was disliked - it seems it was a straight copy of one of the early 90s masterings that have never been very well-liked. I’m not sure whether it was the DSD 2.0 or the Red Book layer that was being discussed.

I know it’s not very purist, but I like SACDs for the 5.1 mixes, so any improvement on the 2.0 side of things doesn’t usually get my juices flowing. There was a similar situation with Norah Jones’ Come Away With Me, where the first SACD release had a disappointing 2.0 DSD layer that was rectified in a later remastering. Again, this wasn’t something I lost sleep over, though others have been mightily miffed by it.

So, if the new release has an improved 2.0 layer but the same 5.1 mix as the 2003 release that I’ve got, I’ll stick with the latter. Glad you’re happy with what you’ve got, too!

I can not help you with your WYWH question, but I also own the 2003 DSOTM SACD. I honestly never listened to the 2 channel mix, because I was all in on 5.1 surround at the time. To me, even the 5.1 mix was a bit of a let down compared to some of my better sounding discs.
I own the Norah jones disc too, it was ok sounding, but not on the same level as some of the better sounding discs. My player ( Denon) played DVD Audio as well, one of the best sounding discs I own is Beck Sea Change.
Too bad these formats died out quickly, I really liked the surround mixes.

Yes, I do recall the 2.0 layer being the one most disliked, looks like you just saved £57, that’s good news. I know what you mean about the 'purists’but what the heck, it’s about what you like, and don’t forget the Floyd themselves played in quadraphonic sound to their live audiences, so all you’ve done is improve on what they did!

Yes, I think some music, and/or producers work will lend itself better to the more ‘special’ mixes.