Why have LPs had such a resurgence?

Don’t other apologising, there is some truly awful spilling on the internet these days.

For the same reason emulsion cameras are having a resurgence in the photography world I would suggest. As said many times above the cool/hip/retro thing is alive and very healthy. My kids used to call me a huge nerd for owning/listening to vinyl but now I am apparently a very cool dad. (Yet another thing I disagree with them about …)

Film vs digital photography is quite a different matter. Digital has only very recently come to match the best of film for resolution at 35mm, and I suspect doesn’t In medium of large formats. Also dodging of burning in are easier in the darkroom (or they seemed so to me). And there is a certain fascination with seeing the image appear with chemicals, even when you fully understand what is happening. But where digital scores infinitely better is cost, there effectively being no consumables cost with digital until or unless you print, and you can restrict that to the very best images. Threat of course is also its downside- you can take 1000s of pictures, and multi-bracket exposures to be sure of capturing the image optimally …then never have time to sort them, let alone optimise them. If needs real discipline to keep image quantity down!

And there is a certain fascination with seeing the image appear with chemicals, even when you fully understand what is happening.

For sure there is. That is what started me on photography when I was about 9, and it never really lost its fascination. Though I haven’t used film for a great many years. There are still a few things that you can do with film that you can’t really do with digital, but on the whole digital is now really good.

There’s been a vinyl revival?

Didn’t know it was dead in the first place? How can you revive something which is not dead?
Don’t even get me started on that semantics bloke! Is he still at round?

The point I was trying to make about emulsion/digital is not what is better, more the fact the old technology is making a comeback in the same way vinyl is. You could use mechanical watches against digital, why have a mechanical watch costing MANY times what a digital watch costs when it is never going to be accurate ? I was merely saying in a lot of areas retro/chic/hip is bringing lots of old technologies back purely because people like them, not because of what is better.

And the point I was making is that in certain aspects film has advantages over digital, in my opinion more real than some people argue vinyl over digital. However that is by the by. I hadn’t actually noticed any resurgence in film popularity - indeed, S/H prices of film cameras seem to nave shown no uplift, and I hadn’t been aware of camera manufacturers bringing out new models. Interesting if it is happening, though I suspect more among enthusiasts or possibly photography students than as a populist movement, unlike vinyl. Where have you observed it?

I would certainly agree with this. I have (several) analogue watches (they actually keep very good time), mainly because I appreciate what is inside them. A similar looking digital watch would be, in practical terms, just as good, possibly better - but aesthetically I like the analogue ones. The only downside of digital watches otherwise is that they need batteries (in most cases) and when the battery runs out you have a small brick until you can find a replacement.

While a distinct advantage of electric watches seems to be that they can be made slimmer: and as someone for whom chunky watches are a turn-off, all my watches these days are digital. But the trouble I find is that it seems all too often when I decide it’s time for a change the one I want to wear has a flat battery!

Edit: I originally said digital not electric, but actually all my watches are analogue not digital, just that they are crystal control battery powered not spring. And I’m not sure that actually there is an impediment to slim fully mechanical watches, unless that is for the popular self-winding capability, but it just seems to be that most slim watches are battery powered.

In fact you can get very slim mechanical watches . I don’t like chunky watches, though I do like a reasonably large face. The face of the one I’m wearing now is about 30mm diameter, and the watch is about 8mm thick - not particularly thin, but not bad. It gains maybe a minute per month - maybe a bit more than a month. Close enough for me

Mine vary from about 4.5-5 mm (thinner towards periphery), to 6.5-7, though the one thick one does include the thickness of a florin. Widths are all similar maybe 32-36mm, faces a bit smaller, perhaps 27-30. But I think this is a bit of thread shift, and I don’t think to do with trendiness - in fact the opposite, as huge watches seem to be the current trend!

I just had the great pleasure of listening to Reference Recordings Malcolm Arnold Overtures on a big Ampex reel to reel tape player and on a zillion dollar high end system. Reel to reel tops vinyl in analog sound by miles. After all, when you think about it, that’s the medium on which most music was recorded. When CDs are mastered today (and perhaps vinyl too) the big thing is to go back to the master tapes. Well reel to reel is like the master tape. It is truly wonderful. No clicks and pops. No jumping up and down to flip sides every 15 minutes. No LPs to clean every time. Though I understand r2r players are high maintenance. Too bad the machines are so darn big. They are just not very practical.

As to the subject topic, I can only answer for myself, I have a relatively new Rega Turntable sitting next to a truly beautiful turntable and engineering marvel, a Bang & Olufsen, now obsolete, but too pretty to part with. Oh and there’s my Audio Note phono Preamp. I can choose between streaming and playing vinyl. Streaming wins every time because of convenience. I’ll have to think about “showing off” my vinyl when company drops in to see if it makes me feel cool. Kinda doubt it, but I’ll give it a try just for fun.

I agree there is an element of photography students, whenever I venture out with a film camera it is youngsters that ask about them. Indeed on two recent holidays my nephews took only film cameras.
A bit old news, “Kodak” reintroduced Ektachrome, this year Fuji reintroduced Acros. There has been a management buyout of Tetenal UK. I’m sure these were not an altruistic decisions. New cameras, few and far between unless you count the Lomography phenomenon, which to me is real hipster trendy.
There is something about a silver image that stands the test of time.

It would be good if Kodak re-released Kodachrome - the best film IMV.

Yuk! Never liked it. Velvia for me

Ha, love the old film references. I dread to think how many rolls of fp4 and hp5 went through my darkroom back in the day. Good times indeed. Sorry for going off topic …

The grain was fantastic, and the colours very accurate, I thought. But then I was mainly trying to photograph small marine organisms, both macro and micro. Their 6 and 12 ASA kodachrome was amazing, though I mostly used K25.
Of my father’s photographs from when he was in Singapore in 1960-63, only the Kodachrome have retained their colours properly. All the Ektachrome and Agfa (and other films) have turned magenta.

Funnily enough, I used my Olympus pen 35mm camera this weekend as the batteries were flat on my Sony digital and I had some film in the fridge… 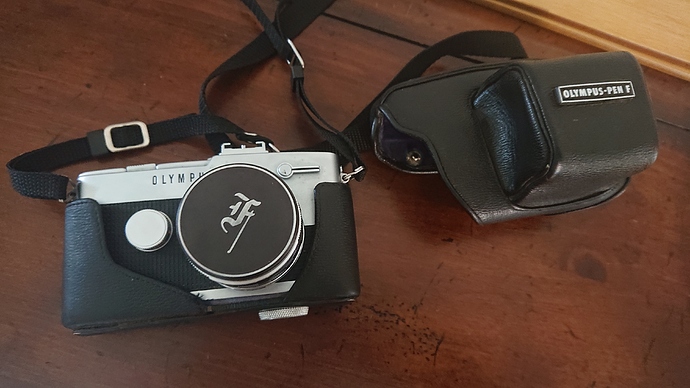 Back to the LPs, I think a lot of people think they’re cool and have probably found a stash of their parents old records and want to have a go playing them.

Whatever the reason, I’m glad. The choice we have foe new vinyl now is fantastic!

Sadly a photo I’ve lost over the years was a very grainy B&W shot of Ritchie Blackmore playing a Gibson in Mk 2 Deep Purple back in 1971/72, using Kodak Royal X pan (1250ASA- pushed 2 stops) in an ancient 120 roll film folding camera that I sneaked into the gig. I never really got on well with slide film, my best photos mainly being with Kodak Extar 25, and I much enjoyed the darkroom work, where I printed up to 20”x 24”, mostly in colour (though some B&W, and some prints from slides). With digital I have thousands of pictures stored on a computer and have only viewed most of them on the computer screen just occasionally on a projection screen - and have not yet got round to printing any at all…

In parallel with LPs, I do plan to scan all my old negatives and slides (sadly the RB one not among them), for archive storage requiring no space. But I will have to do some serious sifting and cataloging (spelling?) of them and my digital collection. (I ripped all my LPs (other that those that had deteriorated too much to be worth it with fresh digital copies available.)