Since I moved from Twonky to Asset I’ve noticed an issue with my control devices (iPhone and iPad). I live in an old stone cottage, with a fibre optic internet connection which is connected to a NETGEAR switch. I have two WiFi access points: one at the Gigaclear fibre optic box (what’s it called?) and a network connected to the switch that has three Apple airport access points. This provides coverage everywhere in the house.

My problem is the that the iPad or iPhone keep switching between WiFi networks despite that network being the preferred source. I can’t turn the Gigaclear WiFi off and I’ve turned the auto-join option in settings and told my devices to forget the other network, but the devices keep searching for them.

Thanks for any feedback …

I used to have the wifi turned off on my BTHH5 and used an Airport Extreme, extended by an Express. That worked well. I now use the wifi on the BTHH5 and extend that network using the Airports, that also works well. In our last house I experience similar problems to you and in the end I just looked at ways to reduce the amount of wifi access points. It did mean running ethernet cables from the HH5 to the extreme, but it did seem to work. Our hose was 70ft plus front to back, high ceilings, solid walls. I feel simplicity of network is the key.
Finally, also check you Airports are running the latest software, they have had various updates.

Is each AE using a wired connection back to the base station? If not, running three of them is a bit optimistic, as the more you use, the slower they run. Maybe time to invest in some of those Ubiquiti thingies?

When I renovated I ran cat 5 and cat 6 cables around the house and back to a NETGEAR switch. I’ll check the software on the airports.

It did mean running ethernet cables from the HH5 to the extreme, but it did seem to work. Our hose was 70ft plus front to back, high ceilings, solid walls

I can’t turn the Gigaclear WiFi off

Are you 100% sure of this? I have a different router from my ISP, and through it’s login / control panel, its internal wifi can be disabled.

Is each AE using a wired connection back to the base station?

Yes each one is hard wired into my LAN. I’m not familiar with the ubiquiti kit. I’ll do some research as they may solve a problem with my tv dropping out every now and then. One of the AE feeds my AppleTV and the TV.

My problem is the that the iPad or iPhone keep switching between WiFi networks despite that network being the preferred source.

If you have other Mac devices (i.e. MacBook, etc) connecting to the Gigaclear WiFi, then your iPad, iPhone will re-connect to this same wifi network, unless you use different iCloud account.

If you have other Mac devices (i.e. MacBook, etc) connecting to the Gigaclear WiFi, then your iPad, iPhone will re-connect to this same wifi network, unless you use different iCloud account.

I invested in an Orbi set-up creating a dedicated wifi network only for the hifi. The Orbi satellites connect through 3-band. One pf the satellites is next to my Naim and has a wired connection to a Cisco swith. The satellites receives its internet signal via tri-band wifi to the Orbi base station. Works very well

Went for Deco M5 mesh wifi system. Installed a dedicated unit for the Naim with a dedicated network. So far so good.

Thanks guys (consigliere and IvdZ) for your experience … more research required

These so-called Mesh systems are a good alternative if you can’t run wired connections around the house. Having discontinued their Airplay range, Apple now sell Linksys Mesh stuff instead. Given that you already have the cables in place, better to use them, though. 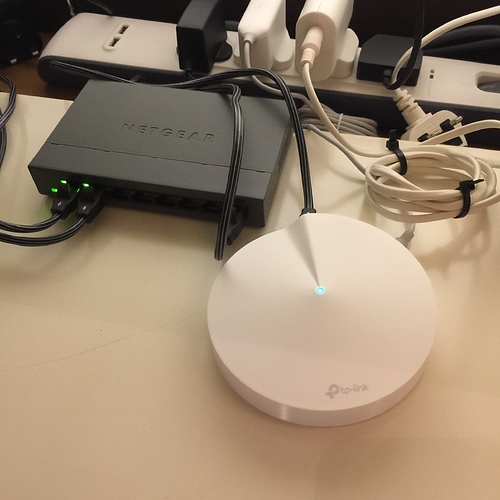 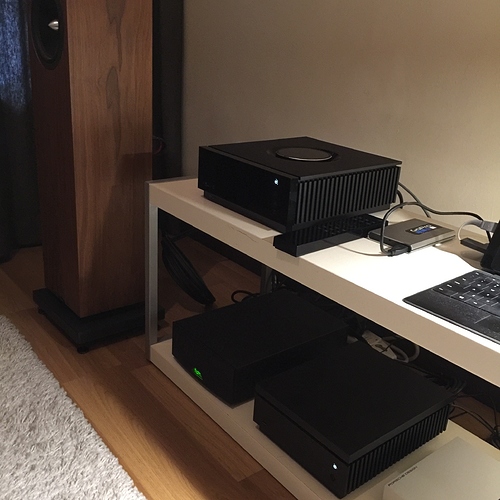 I basically followed Iver’s recommendation from here and the Roon forum and have the same setup except my girlfriend wanted the Eero’s (Mesh network) product line purely from an aesthetic point of view. It’s been fantastic and a huge upgrade over my Airport Extreme/express setup.

Marcus man - could you elaborate please?
My airport extremes are about 10 years old and have provided good service as access points, but I rely on direct wired Ethernet connections for my tv, NAS and music. [quote=“marcusman, post:14, topic:743”]
It’s been fantastic and a huge upgrade over my Airport Extreme/express setup.
[/quote]

Sure. I had an Airport Extreme and a couple of Airport Expresses for years as well. They worked fine, don’t get me wrong. I recently moved to an older house with thick walls and my wifi penetration suffered terribly. I couldn’t get any signal in certain parts of the house and my wifi throughput suffered. I switched to a Wifi mesh network based off reading @IvdZ posts since he had the same setup. Eero is the product that my girlfriend wanted so I bought it. I get 293 Mbps download speeds throughout my house now! It’s been so good I’ve basically abandoned my wired setup. My TV, NAS and music all are now wireless.
I hope this helps. If there is something specific let me know.

WiFi technology has come on so far in the last ten years. I ditched my Apple extreme and express setup about a year ago and just added a three node Google WiFi mesh. I hardwired one node to my Sky broadband router,set it up in NAT mode between the Google WiFi access point and the Broadband Router and disabled Wifi on the Sky router. The other mesh nodes are in bridged mode.

I can also prioritise traffic for example between my Roon core server and the internet if I wish.

All of my kit runs off wifi, nothing other than the primary mesh node is Ethernet cable wired to the router. I can happily stream DSD128 (I only have one of those though

The only reason I have 3 nodes and not 2 is that I run Nest outdoor security cameras and my car uses the wifi for over the air software updates, so essentially the third node serves the driveway.

My house is from 1890, has half a meter thick external walls with 7 rooms over two floors and where there is normally around 30 devices on the network. Performance is sound and coverage is total.

My broadband service provider is Sky. I use Sky Fibre Max, but I am on a slightly longer overhead line to my fibre enabled cabinet, so I get 51Mb/s down with 15Mb/s up - more than enough for multiple hi-res FLAC streams from Qobuz. Sky’s network routing and peering strategy is particularly good when compared with BTs , where even when you can get decent bandwidth, their Network latency was much poorer due to hairpinned internet traffic routing on their network.

Unless you live in a home with rebar reinforced concrete floors and walls, where fixed cable is a necessity, you should try out a mesh solution and see for yourself.

I’m sure this has been answered but I want to clarify for sure. I now have AirPort Extreme with my 272 and NAS hardwired to and an Airport Express with my Qute connected via Ethernet to it. With a mesh system will I be able to connect my Qute via Ethernet with one of the satellites as I do with the AE now?

100% agree with you @marka I also have 3 units. I didn’t know how far the technology has changed as well. Leaps and bounds IMHO. My coverage is also total. Previously if I closed the door in my computer room my Wifi signal dropped. Not anymore. I didn’t know wireless could be this good

yes as long as your Mesh system has Ethernet ports.