Would CD5i (Italic) be an upgrade from Linn Karik?

My Karik 3 lacks its Numerik which needs repair. I wonder whether a Naim CD5i Italic would be a better move? I assume the 5i is newer but how does it compare sonically with the old but still going pretty strong Karik? I’m afraid I know very little about Naim CDPs as I’ve had the Karik a long time. I ask because I’ve seen a 5i (used) that’s within budget…or should I persist with getting the Numerik repaired?
I like the idea of (LP12 and speakers aside) having everything Naim, but I like the Karik also.
Anyone heard both players?

Thanks for any advice/opinions on their relative SQ.

Thanks Japtimscarlet.
Yes, partly why I asked. Karik in its day was quite a player so I wondered how it would compare. I’d read that the Si was highly rated, in reviews, as indeed was the i (comparatively in its price range)…but one never knows without some actual hearing experience

Stevie, Isn’t it more a question of what kind of system this would make with your existing amplifier?
Chris

Hi Chris
Well, I have a Nait XS2, which I’m not going to be in a position to change for a long time (and I like it, lol). I’d kind of assumed there’d be some synergy between Naim players/amps
But…so many variables, I dunno!

I haven’t heard too many CD players, especially Naim ones

Stevie, the cd5i is a good player but nothing special. I have it and it spins a disc but my chord mojo compiles much more and livelier music out of the ripped files.

My old CD player was broken so I needed one, but if I was in the same position again, I would be looking for a good deal on the 5si or 5xs players. These are much better. Or an old serviced cd player.

Your amp is a significant step better than the cd5i.

With a Nait XS2 I think you will get away with it. Worth a punt for def.

Be sure not to stand one on top of the other and use the ‘lavender’ interconnect that comes with the Cd player.

Try to find a CD5x, or get the Numerik repaired.

Thanks all. I think I’ll hold off for awhile. My Karik seems OK (what was that I read elsewhere about a fishy smell, lol? Thankfully, mine is fish-free!) and contact Class A again re the Numerik.

While I’m researching the better Naim players, of course

Would you not consider a streamer? An ND5XS2 (or even a second-hand ND5XS) would fit perfectly with your XS2 and you could plug the Karik into it digitally if you still felt the need to spin CDs. Whether the DAC in an ND5XS2 would be preferable to the Numerik you’d have to decide for yourself.

The Karik was a formidable player, even without the Numerik. It used Linn’s own mech which was a very high standard. In it’s day I preferred it over a CDI and with a Numerik it was a matter of opinion as to whether it beat out a CDS or not. So unless the CD5i beats those formidable Naim pedigrees, then it is unlikely to be a step up from the Karik.

I think the bigger problem is that when that mech goes , Linn won’t be able to service it anymore.

Never considered a streamer, Steeve…never really been much of an online music person but I’ll have a looksee.

Yes, Zen, that’s what I thought re Linn support. I guess I could just wait for the day the Karik finally dies, and start saving in the meantime.

FWIW @steviebee I’m not a online music person either. But I ripped my collection carefully to a NAS and archived my CDs in long term storage to get space back and never looked back. Home streaming, if you have more than one system is great.

And while I’ve not made a direct comparison, I’ve spent countless hours listening to a Karik Numerik and feel that my current source (NDX/XPSdr) is better. Considering the NDX is now yesterday’s news you can pick them up second hand for a bargain.

Stevie: I have a first-generation Karik (but not the Numerik). A couple of weeks ago, I borrowed an ex-dem CD5i to do the same comparison you’re talking about. After days of warm-up, I definitely prefer the Naim – but the difference is not night and day. I’ve decided my funds would be better spent elsewhere. I’m heading down the ND5XS2 route, and will probably hang on to the Linn until it shuffles off this mortal coil.

I have a first-generation Karik

Bhoyo,…How old was the Naim player?
Linn Karik should have been from 1992, that is 26 years old.
Definitely in need of a recapp before a comparison with another player is made.

An expert in our “group” has made recapp on many older Linn products,.it’s an incredible difference on a Linn Karik after a recapp.
Maybe you should think about doing a recapp instead on your Karik.
Also,…there are new laser-mechanics to find,.among others to Linn Karik.

In addition,.one must be very attentive to the details when comparing, age, same placement on the rack…not just beside, use the same sockets in your PowerStrip, same interconnect and powercable…not just a like etc, etc.
Otherwise,.it is possible to draw wrong conclusions when comparing products.

Just a few thoughts I got when I read your post.

There were power supply upgrades too. A first gen Karik and last gen Karik with the Brilliant power upgrade are not the same.

I agree with you @Peder and @feeling_zen. But even with an old Karik sans upgrades, the 2012 Naim was not night-and-day better.

one must be very attentive to the details when comparing

Yeah, thanks for that. But I do know how to compare products!

There were power supply upgrades too. A first gen Karik and last gen Karik with the Brilliant power upgrade are not the same.

The last two were SMPS.

Any and all of which would narrow the gap for @steviebee.

Yeah, thanks for that. But I do know how to compare products!

My experience is that seven,eight out of ten are doing something wrong when they are comparing two or more hifi-products.

Then it is better to recall this once too much,instead of once too little.
It may be about big money,if you buy a product,.and it later turned out that it was not as good as you thought.
This only because you made a mistake when you tested the product.

I happened myself for this two weeks ago, he who is the vice president of our “group” did wrong when we would test powercables.
I had to remind him of this.
Everyone can do,think wrong…Even if you are knowledgeable,and this guy is it.

Then it is better to remind once too much, instead of once too little as…I wrote at the beginning.

That was when we would test these “boa snakes” below. 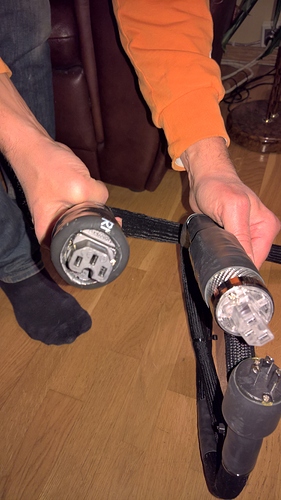