Would? ( you make the improvement)…

I have a 20sqm room with limited layout. I sit 2m from the speakers; separated from each other by 2.5m (in turn 30cm from the rear wall)

As described in the profile; I currently own the following equipment Naim UnitiQute2 + Monitor Áudio silver Rx2 on Spectral stands with inakustik atmos air cables.

Having said that, knowing that I do not enjoy all the bass because im too close, (to win an octave i would need to go back 1m), the idea of ​​sound enhancement would have to be at the midrange to High spectrum.
A more refined tweeter, I’d say?.

by buying preloved equipment , (budget limited to 2k€) I find myself unable to hear "in loco” the eventual purchase material.

I have the oportunity to buy a dynaudio S40;
a PMC twenty 23 (also for the same value.)
Would i gain (lost) pairing with my UQ2.

Or should i buy a used Superuniti since a better source could improve other aspects?

Any suggestions not listed are also welcome: different perspectives are valuable.
Thanks in advance …

Hi, I can’t imagine that a Superuniti would help tame the bass, although I may improve the sound in other ways. I would look for a different small, wall mountable speaker such as the Neat Iota.

I Will try to find a dealer to make an audition.
(Your advice is more of fine tuning the speakers/ oposite to make a change on source. True be told, the 30w of my UQ its enough for me and my earing (volume) habits…

A UnitiQute will not drive the twenty.23 properly. When I had a pair - and they are very nice indeed - I used them with a SuperUniti. It’s also not enough for the S40.

I’d suggest you get your speakers closer together. If you are 2m away, you want them about 1.6m apart. That should give a much more solid sound.

I have them in a desktop system, connected as an All In One Computer >> Wadia 151PowerDac mini (25W 8 Ohmns; 50W 4 Ohmns) >> Dali Menuet, and they play almost like floorstanders, and my space is quite large…; In addition, it would allow you to bring them closer to the back wall, because they benefit from a distance of between 5 cm. and 15 cms., which is the one I have them currently. I also tried the Neat Iota in the same configuration, and I like a lot more the Menuet.

Thanks for the valuable input HH.
Impossíble to make them closer. 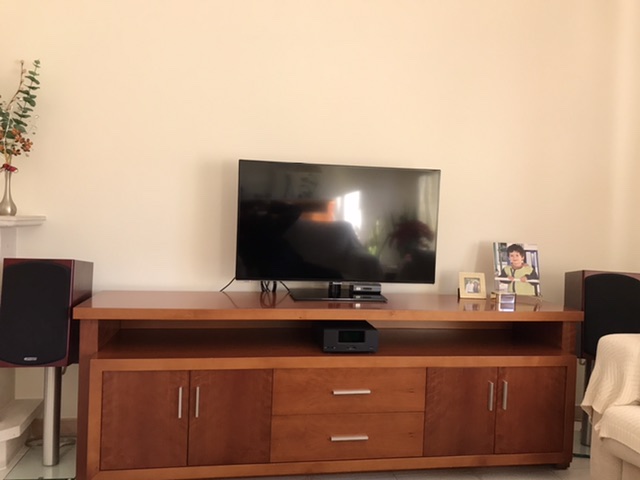 Thanks also Newcomer. I shall try to make a direct comparison to the Neat’s

All kinds of issues here. The speakers need to be toed in - I sit 2m from my 3 meter apart speakers and the sound is just fine as they are toed in at 30 degree angles. The giant credenza in between them won’t be doing the sound any favors, nor the sofa end in front of one of the speakers. Honestly, I would see about sorting the room first. I know this can be difficult with partners/family, but otherwise you’re just chasing the dragon by buying more expensive gear. If you do get new speakers and same setup, be sure to get non rear ported ones.

yes… the configuration of the”furniture”…
Is a floorstander a better option by making the tweeter/ woofer stand at a higher ground?
Or not expressive at all?

Speakers need space. It’s never going to sound good with them squeezed against a cupboard and with one half hidden behind the sofa. I’d be inclined to get some Neat Iotas and attaching them to the wall either side of the TV. If you want a good sound with your existing speakers, or a larger more illustrious system altogether, it’s time to get that huge cupboard on eBay. Take a look at system pics and you’ll see how people have their systems set up.

I really wouldn’t post it on System Pics, which isn’t really for getting advice.

You are right HH. I never considered attach them to the Wall.

In that setup you have, they can’t never sound good: so backed over the giant credenza in between them prevents them from even communicating, let alone with the sofa end in front of one of them.

You can consider attaching both the Iotas or the Menuets to the wall on both sides of the TV, both models will work very well in that configuration. But another thing that I would try first, and before I consider any expense, would be to remove the RX2 from those stands and place them on the big credenza, on the furniture on both sides of the TV, and with a few simple 3M silicone feet without going further; the sound is likely to improve by a lot %, and is simple, cheap and reversible. If it works, as it should, it will already be a matter of settling, improving your feet with suitable Isoacoustics Orea, for example, or even swapping them for the Iotas or Menuets, which for sure both perform better than MAs.

That wouldn’t work with the existing ones though. Another nice speaker that will go on the wall is the PMC DB1. If you want stand mounts in the existing location then make sure they are not rear ported. While the Iota is rear ported they do work best on the wall, though how they’d be in your large room is questionable.

RX2 from those stands and place them on the big credenza

I will try this asap.

I will try this asap.

I am convinced that it will be a great SQ leap forward even with the RX2, and it will also allow you to rate the set up and its upgrade with another light. In any case, if you finally take the twek, we would appreciate a kind result information and impressions right here.

A UnitiQuite2 is not up to the task of driving Dynaudio Special 40s, especially if you want good bass control. They really need more power/current to shine. It will work, but I doubt it will solve your goals for change. Also, the S40s need at least a half meter of space behind and to their sides. Otherwise, they will suffer in bass response (sounding boomy).

This should give you an immediate and free improvement. Then get the Superuniti if you want more.

, we would appreciate a kind result information and impressions right here.

I will. Im on vacations. Going to Try some tests tomorrow

So… after a morning of experiments by following your recommendantions, i put the MA’s on the credenza.
Indeed ( as expected), I gained presence by approaching the pair, and better balance by obstacle clearance.

The only (two) inconvenience i saw (eard) was: tweeter was in a higher position (affecting the overall sound) and the aesthetics.

the first Will be (?) resolved by a smaller speaker and more refined tweeter.
(I im also curious on how an Audiovector QR1 would perform, with an AMT tweeter / after audition of the suggested Neat and Dali).

The second is convincing my wife on a new layout. 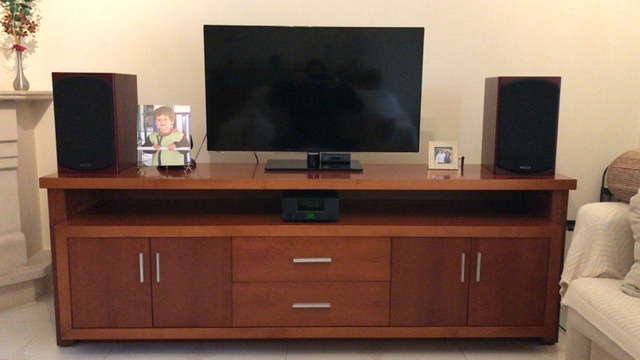 Speaker stands are typically 60cm to 75cm high, so you’ve probably got them about right.

I don’t usually play my Iotas particularly loud, as they are on while I’m working on the computer. Yesterday I was thinking about the challenge you face and turned them up to over 50 on the Qute, playing some Human League, and they were brilliant. They don’t have deep bass of course but it was very tight and dynamic and more than ‘good enough’. I’ve included a picture below just in case you haven’t seen them. They are very pretty little speakers and come in a range of colours. 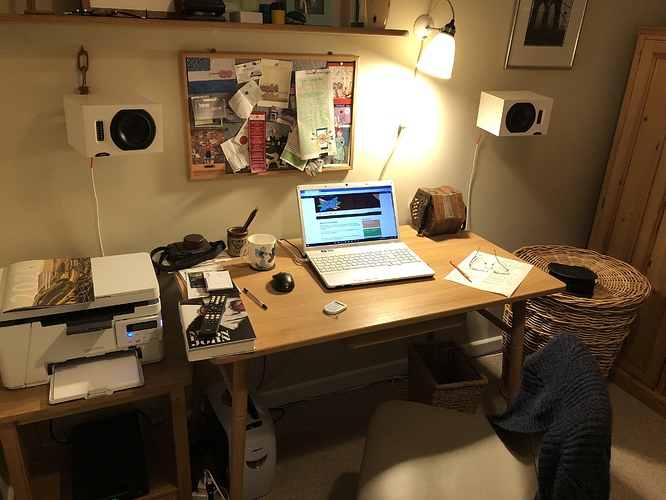