@Richard.Dane when you’re next down at Rye Harbour this might be worth a detour Brenzett Aeronautical Museum, about 20 minutes from Rye along the A259 only open on weekends and Monday. Pretty much every bit of WW2 stuff dug up from Romney Marsh.

Thanks for the mention of the Hawkinge museum right on my doorstep and I’ve never been there! - now on my list when we’re back out.

p.s. And if he was telling the truth, who knows what else might be buried in your garden!

Richard, and therein lies the basis for many a fraud e.g. around historical & highly collectible Harley Davidson motorcyles and/or parts for them. Either around where the US airbases were in England or in Ireland. Many years ago, new ‘burials’ were being discovered on a regular basis - of course, money up-front.

Thanks Andy, I didn’t know about Brenzett Aeronautical Museum. I usually drive right past Brenzett when driving down to Dungeness, so I must stop by.

I don’t mean to be picky, but the picture is a Consolidated B-24 Liberator.

The Mustang was originally built for the RAF and was fitted with the Alison this engine was ok for low level flight.when it was fitted with the Merlin it became a completely different aircraft which was used to escort American bombers on raids over Germany for this it needed both range and altitude the Merlin plus drop tanks gave it both and bomber losses were considerably reduced so it was good for more than just low level ops.

I have heard a similar story of a certain club in Malta, Mum reckoned you could hear the planes move when the dancing started

I’m talking about RAF Mustangs, it wasn’t until the Mustang IV that the RAF had a serviceable aircraft. But they never really became a significant RAF weapon as Spitfire & later the Typhoon were the weapons of choice in the pre & post D-Day period when the need for air superiority & ground support rather than air defence became the priority.
Also keep in mind RAF Bomber Command had no need for fighter escort (which is were the later P51 excelled) as most of the RAF offensive was night target & area bombing.

The main NAA P51 development was after 1942 when US joined the war in Europe & primarily for the USAAF. This resulted in the P51 variants with Packard engines (US built Merlins) were further developed in both airframe & engine for both multipurpose ground attack & altitude long distance daylight bomber escort.
Incidentally the majority of Lancaster engines were US (Packard) built.

Speaking of Malta (and spitfires)… 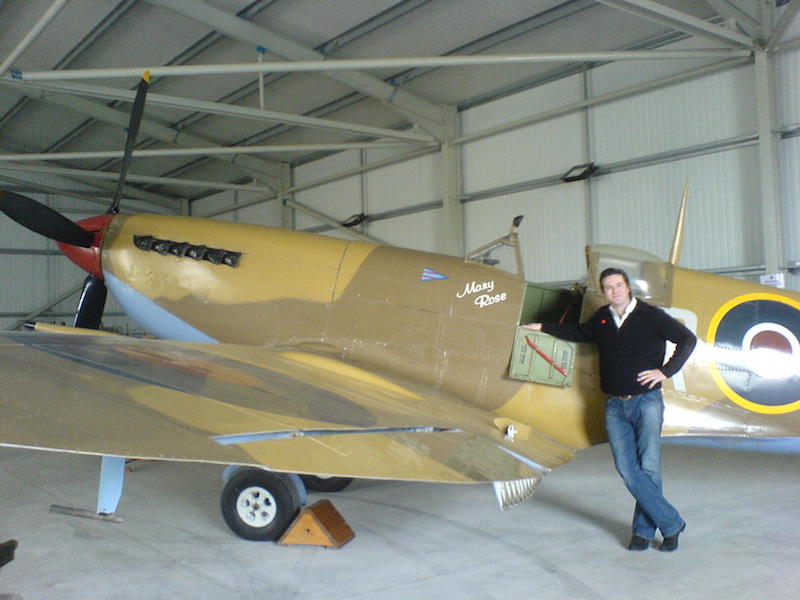 Is that at the Aero Museum ?

Yes, the museum at Ta’Qali. I think this was sometime in 2006 or thereabouts. My girlfriend lived in Valetta.

Played sports there when I was at school at Tal-Handaq .

I titled this “The Hangar Today”

When I was in there today, (to do a maintenance fight in one of our PA28s), only the Chipmunk remains. The Hurricane and the Harvard went 3 or 4 years ago and it must be 3 months since I last flew the Chipmunk. 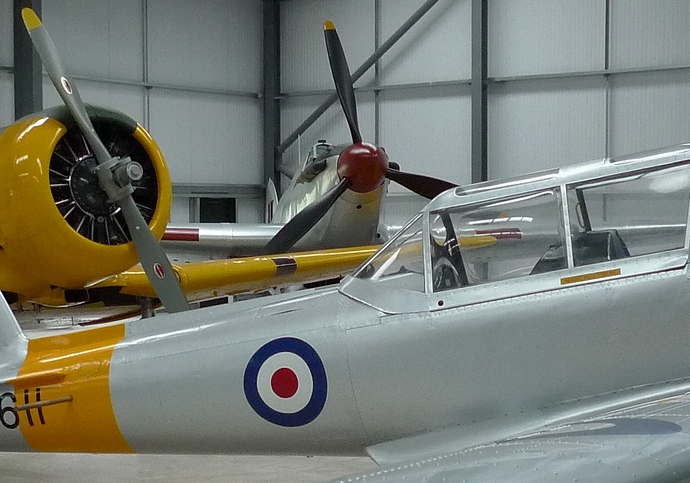 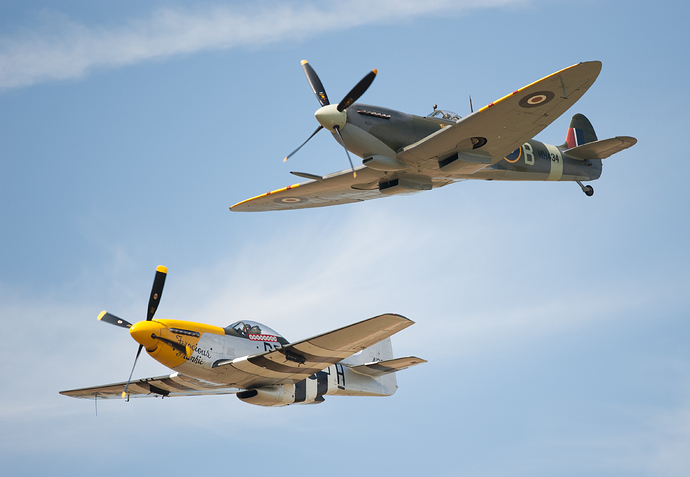 Are the propellers turning ??

Or the photograph exposure / frame is so precise ?

I know, I know the shutter speed is too high - but I wanted to get the planes sharp, and at that distance they were moving incredibly fast - if you look carefully the props are slightly blurred - but not as they should be - panning with a slower shutter speed is easier said than done with aircraft so close to you - it was a Nikon 300mm f4 lens. A high speed frame burst helped with composure and a bit of cropping

The Spitfire is MH434, a Mk-IX (type 361) & coincidentally the same type as the one Richard is photographed with.
Despite its appearances in Battle of Britain films & memorial events, its a bit too young for that, Mk-IX’s were one of the last of the Merlin engined Spitfires & MH434 was built in 1943.
The Mk-IX’s were introduced in response to the Folke-Wolf FW190, the significant change was a more powerful Merlin 61 (later a 63) equipped with a two stage supercharger, this enabled it to match both the outright speed & the altitude performance of the FW190.

Indeed, it even has its own web site… available for films or fly bys

Based at Duxford …with that and Old Warden being absolute gems of places for taking pictures of vintage aircraft in the air up close, though my picture above was taken at the Rougham Air Show at Bury St Edmunds, which is sadly no more.

Thanks Simon, I was aware of www.hm434.
l normally go to Duxford every year or so, not so much for the air shows, I prefer less crowded & able to look around & talk to the folks in the workshops.
Many years ago I was a regular at Old Warden as I had a buddy who worked on maintenance & restoration projects, I got roped in for stuff, most sweeping broom, sometimes a multimeter, once in a while at a few thousand feet.

once in a while at a few thousand feet.

You lucky so and so