You can only go to one gig, so choose which one 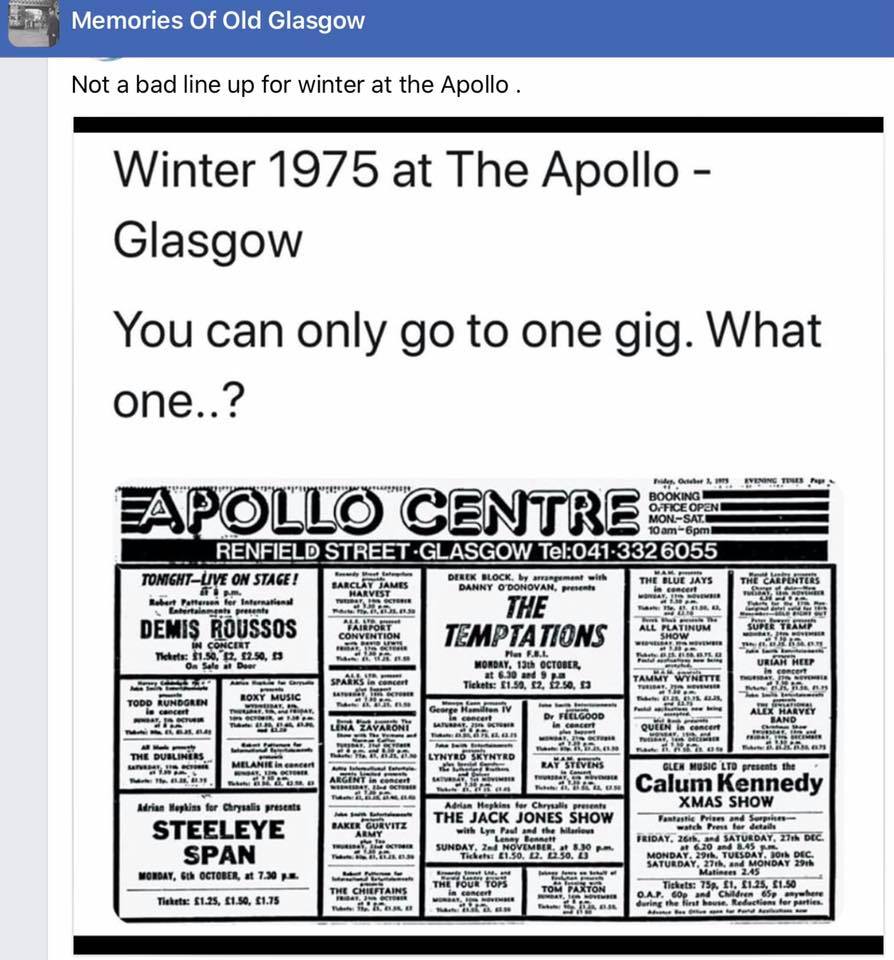 Saw this on a thread I am on on Facebook earlier and thought this would be a good question for the playmates on here.
So the queation is which gig would you go to?
Personally I saw 3 of the shows listed.

Steeleye Span , Love Maddie Priors voice. Once saw her leave the stage during a jig , turned up at the mixing desk in the circle, down a good gulp or two of Johnnie Walkers and then return to the stage. She didn’t half dance well after that.

Alex Harvey, all day long … but then, I would say that, being a Weegie, wouldn’t I?

Would have to be Roxy Music for me. Always been a fan of the early stuff.

Hi ewemon, my choice would also be Roxy Music,but if I’d been able to go to three as you did,I’d choose Alex Harvey and Uriah Heep. Out of interest,which three did you attend?

Temps, Todd… and Alex or Feelgoods. Last one is a toughie…probably Alex. Vambo!

Wonder what the All Platinum Show is?

Skynyrd, Supertramap and Queen were the 3 I went to. I had seen Steeleye at the Grangemouth Rock Festival and Alex Harvey a couple of times so wasn’t bothered about going to see them. I also had free tickets for the Fairport show but ended up working late so gave them off to one of my co workers.

The venue was legendary for various reasons. The Glasgow crowd didn’t suffer fools.

This is a copy of a little story Ian Hunter from Mott the Hoople tells about the venue and crowd.

"Well, there was the night when the manager came into the dressing room after the show with one of those statuettes they gave you if you sold out.

I still have mine. He had a bandage around his head through which copious amounts of blood were dripping. I asked him what happened, and he said quite matter-of-factly that they hadn’t opened the doors on time (glass paneled as I recall) so they’d used him as a battering ram!

Another fond memory was sitting in the stalls at the sound check and being introduced to the entire Harvey family by Alex. Great gig. Stage a little high, but not a bad idea actually! One bloke punched me on the way out and shouted, 'Brilliant!!

You also didn’t want to mess with the security guys as they had a fearsome reputation of hitting first and launching you out or at the front door. If any fan made the stage he usually got a beating at the side of the stage and if any band member complained they usually got threatened with physical voilence as well.

I had the ticket, went in to Wales to pick a mate up who was going with us. Somewhere just outside of Welshpool the clutch went. We never made it. So gutted. Would love to go back and actually attend the concert I missed.

Roxy or Alex Harvey. I was at the Grangemouth Rock Festival too!

Uriah Heep were also supposed to play but called off due to “transport” problems.

I had done a few festivals so knew to go out and buy a large sheet of see through plastic in case it rained which I think in the end covered about 10 of us. You can also lay it on the ground if it is sunny and the ground is wet.

Out of the half dozen or so that I might consider in that list, probably most tempting to try Lynyrd Skynyrd out of curiosity with hindiight. At the time I wouldn’t have thought of them. Queen might have been interesting as it was just about the time of release of Night at the Opera (and Bohemian Rhapsody as a single).

Hendrix at the Filmore East with the Band of Gypsies would be top of the list.

You missed out KC and the Sunshine band iirc. Or maybe that was “Sunshine”?
Status Quo were epic!

Nope it was the band Sunshine. Trying to remember that much about them and could be wrong with most of this. Think they were Scottish and set up for the reason of trying to be the UK entrant on to the Euro Song contest. Memory tells me that (I think his name was) David Balfour either he was in it or was their Musical director or Manager.
He had recording studios quite near to me and a lot of artists used to use them such as Macca, Bryan Ferry, Climax Blues Band and a whole host of others.

I loved Glasgow Apollo. I saw my first proper gig there when I was 15 years old. The Police, with The Cramps and Live Wire support, May 1979. It was £2, unreserved seating, I think me and my pals got a spot in the middle of Row V of the stalls.
The Apollo stage must have been about 12 feet high. The Cramps were getting booed relentlessly by the partisan Glasgow crowd. Lux Interior hung from the edge of the stage, then dropped into the area in front of the stalls,and was chased through the emergency exit by an small group of disgruntled Police fans.

In answer to the question, I’d probabably choose Barclay James Harvest from the very impressive lineup above.

My 1975 self probably would have gone for The Carpenters. However at the age of 11, my mum and dad would probably dragged me and my brother to Calum Kennedy. Most likely dressed in my rather fetching brushed denim suit, and a shirt and tie with a matching Paisley pattern.
Almost certainly better than Lena Zavaroni, which would have been their second choice.

The first few concerts I went to were also at the Apollo while I was a student at Glasgow University, and I have very fond memories of the venue. I think the first band I saw there was probably Humble Pie.

From the options available in the winter line-up, I think my choice now would be Lynyrd Skynyrd, although at the time it would probably have been a toss-up between Barclay James Harvest or Fairport Convention. Dr. Feelgood would have been in the mix as well. I’m pretty sure I did attend the Melanie concert that year, and I’ve seen Fairport a few times in Glasgow, but not I think at the Apollo.

No one has mentioned Lena Zavaroni yet - makes decision even more difficult!

Queen, because I never got to see them, and Skynyrd because I did, several times

I saw Humble Pie at the Apollo as well. Part of the gig turned out as side 4 on their Eat It dbl.