Your favourite Violin Concerto(s) [and a short why]

Let’s wake up some of classical music lovers: it’s morning!

My wife wants me to include Bach’s E major one. I’ll oblige out of respect for the author, whose respect for the listeners’ less capable fascia was in turn close to null, making me consider him one who wrote for himself, which is often the safest way to oblivion. But he was very lucky, due probably to the ‘bible belt’ part of his fans.

Now to anyone it may concern. Please some short why’s too. Thanks.

Max, I’ve moved your thread to the Music Room as that seems the more appropriate place for it.

It’s a tough choice, and I could easily have gone for Prokofiev’s concerto in D along with one or two others, but ultimately I’ll never forget the first time I really properly listened to Sibelius’ Violin concerto; I was just starting to really get interested in classical music and was buying LPs based on recommendations from Edward at The Collector’s Room In Salisbury. He recommended the Sibelius and I bought three different LPs to listen to at home; IIRC, one was by Ida Haendel, one by Ruggiero Ricci, and the other by Kyung Wha Chung. I can’t recall now which one I played first, possibly the Ricci as it was the oldest, but the hairs on my arms prickled as I listened. I’ve since heard the concerto three or four times in concert and it’s always keenly anticipated.

thanks, it’s what I was asking…
I am a devoted listener of Sibelius symphonies, especially the later ones, like the 5th, whose final choral by the brass section, slowly coming up through the ostinato of the orchestra, is one of the few remaining musical things that can make my arms’ hair prickle. His violin concerto is less familiar to me, sorry, possibly because of a certain ‘forced’ induction to some elation by its famous main theme.

Thanks for your contribution. I started the thread because I was listening to the Beethoven’s, and once more I was struck by how you cannot get bored by a single moment of it. Happy that you too like the Prokof’ev’s!

My favourites are Beethoven’s, Bruch’s No.1, and Mendelsohn’s.

But for a brief ‘why’ I struggle, other than that they are beautiful! I don’t have a particular favourite of these three, depending perhaps on mood, or on which I have just heard. As I write this, a few weeks since I played any of them (not to self: overdue for play!), the Mendelsohn is the one whose haunting melody immediately came to me without thinking. Beethoven was my introduction to classical music - actually my introduction to music - though not the violin concerto, but Egmont overture. (My Mum had it on a 78, and around the age of 7, at a time when other kids were singing “She loves you yeah, yeah, yeah”, I’d come home from school, wind up the gramophone, and play Egmont first, then other music from her small collection.) As for the Bruch: a good few years later in my Mum gave me as an LP for my birthday, saying she didn’t know what to buy me, but last time she’d visited she’d noted I didn’t have it (I simply had never come across it before then).

If I remember, next time I listen to them I will try to analyse a bit more what I like about them, and return here. 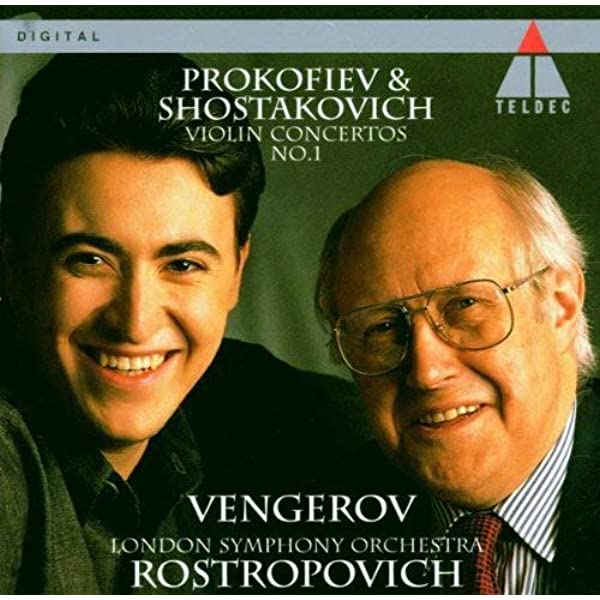 The Lovely Prokofiev has already been mentioned. The Shostakovich may be less obviously pretty, but perhaps is even more moving. Both are stunningly played and recorded.

Šostakovič is another one I have guiltily overlooked. I’ll catch up.
@david1111: I’m happy to see Vivaldi quoted. He’s often punished by the silly Stravinskij’s remark (geniuses too can say silly things) that he wrote the same concert 500 times. I have a delicious edition of the Four Seasons (it took me 55 years or so to get to have them) played by a very good violinist, blissfully not promoted by record companies’ marketing bureau: Sybille Tschopp, a Swiss player whom I heard on Radio Swiss Classic. When cleverly approached, Vivaldi is lively, stimulating, free of cultural constraints.

If I had to choose one violin concerto it would be the Sibelius. Why? It just haunts me, and I had a crush on a girl who had just come back from working / studying in Helsinki.

A close second would be the Bach offerings.

Thanks for the recommendations - must look out the Prokofiev and Shostakovich. And here is one I had forgotten about - not great but enjoyable. 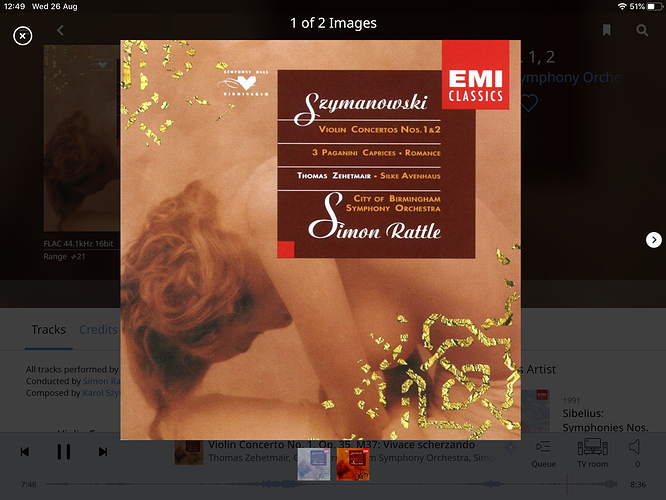 Perhaps a slightly dull choice; my favourite is Bach’s E Major concerto BWV 1042. The allegro is just so joyful and uplifting, almost danceable. Then the adagio is so stately and beautiful, almost heart wrenching. The joy then reappears with the closing allegro assai. I just love it.

I have quite a few recordings of it, my favourite probably being by Hilary Hahn with the Los Angeles Chamber Orchestra. The Rachel Podger, Alina Ibragimova and Isabelle Faust recordings are also superb and very different to each other of course.

Interesting … I’d never heard that remark.
It does make a bit of sense, but it does for all of the composers really. All artists have a style.

I enjoy Mozart’s singing violin’s, and the myriad of crescendos in Beethoven’s pieces, but it can get repetitive if one listens to a particular composer too often.
I’m listening to Saint-Saens’s organ Symphony as I type, and Berlioz earlier on today, both of whom have a distinctive style. Very nice though. I like Mendelssohn’s plentiful use of the lower register instruments.
Dvorak is a fav as well.

Edit: I now realise “a short why” is required… Britten’s concerto because of the extraordinary interplay between violin and orchestra. Berg because of the depth of the whole thing (and that soaring violin at the beginning), and Barber because of its emotional power, used to such good effect in Terence Davies’ film The Deep Blue Sea.

Bruch played by Kyung Wha Chung
Saw her playing this , she was wearing an electric blue ball gown and looked absolutely magnificent.
When I play this wonderful piece it lifts my spirits but also brings tears to my eyes.

Oh… that’s not an easy one to answer.

I love Tchaikowsky, Sibelius, Mendelssohn… but if I were to pick but one it would be Brahms’. To me the 3 movements are great, but the Adagio is so intense and emptional that it gives me the shivers. Brahms himself called the Adagio “weak”, but apparently I’m not the only one to disagree.

I first heard the Brahms by Perlman/Giuliani when I was 17 or so, and I still have that LP. Since then I discovered several others (Mullova/Abbado, Heifetz/Reiner, Hahn/Marriner and Batiashvili/ Thielemann come to mind ). At this moment my favourite version is Jansen/Pappano. It was recorded live so technically it may not be the most perfect execution, but the vitality is second to none. Plus it is coupled with Bartok’s 1, a rare combination on record. 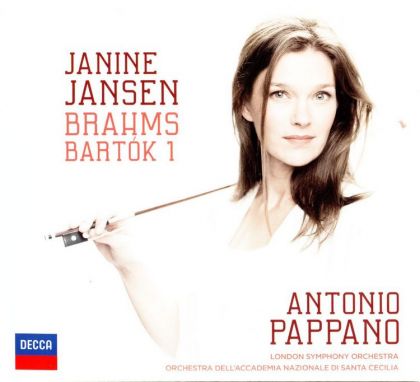 This is the same choice Silvia has done when I asked her. I too love that concerto in a way that comes a bit out of huge respect and admiration more than of instinct, as is a little for me when it’s about Bach. But yes, it’s a noble and joyful Baroque masterpiece.
My Mom - who was a violinist - loved it above almost anything else. I still remember that she used to practice it a little when she was already out of a career age, studying it with intensity, perfect intonation and probably searching in it revenge and solace for all the bitterness that had characterized so many years of her life.
M.

After posting, I browsed in the bookshelf and found a forgotten Philips CD with Bach’s violin Concertos, in an old but then respected recording by The Musici, a renown Italian chamber orchestra of the late 50s. Among the soloists, only Felix Ayo is a name still remembered.

So I am listening to it now. The recording is audibly 1958, but most of all it is making me realize how Bach was intended then, before the first outburst of ‘period’ anarchy of the early 80s and the slow process of sensible modernization and humanization Bach underwent in the subsequent decades; it sounds like if Bach had been a statue, not a human being. All is solemn, not joyous, and the dynamics seem to be kept at a leash in fear of profaning the idea of absolute religiousness that has kept so many from understanding Bach in full. Listening to such a rendition cast a blinding light on the necessity to dust the composer off and remember how he loved Vivaldi and Italian musicians - there must have been a reason for that.
Anyway, I’ll now look for a really fine performance somewhere, and meanwhile I remark that every time I listen to the Siciliana from the Flute sonata, especially in the piano version by Wilhelm Kempf, I wonder where that man was when he was taken by such moments of musical ecstasy and melancholy.
Bye
M.

This is the cover of my favourite. You are right about Vivaldi. This one in particular has many similarities. I love Vivaldi too. His output was of course massive and it’s hard to choose. 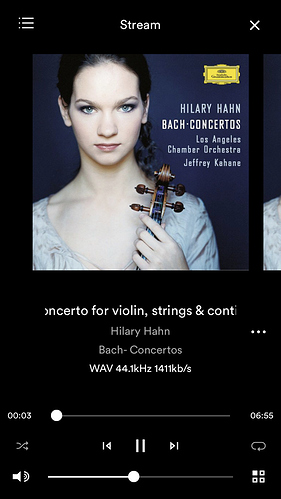 I love Vivaldi too. His output was of course massive and it’s hard to choose.

Yes, and it was attributed to Stravinskji, who is also rumored to have answered, to George Gershwin asking him for composition lessons, ‘How much do you earn in one year, Mr Gershwin?’ to which G.G. replied ‘About 250,000’; ‘In which case’ S. said, ‘it’s me needing lessons from you’. Urban legends?

Truth is, Vivaldi didn’t write 230 or 500 times the same concerto more than Bach wrote 250 times the same Cantata or Haydn about 110 times the same Symphony. And if Baroque hasn’t buried the then future of music under 6 feet of boredom and hopelessness, much is Vivaldi’s merit.

Let’s say that Vivaldi could write ten engaging and fun Concertos with the stuff of a single Bach’s Fugue, with the difference that when listening to Vivaldi you can take your breath again every 8 minutes or so.