While sorting through some things I found this letter received from Naim when I purchased my first Naim component, a Nait XS. 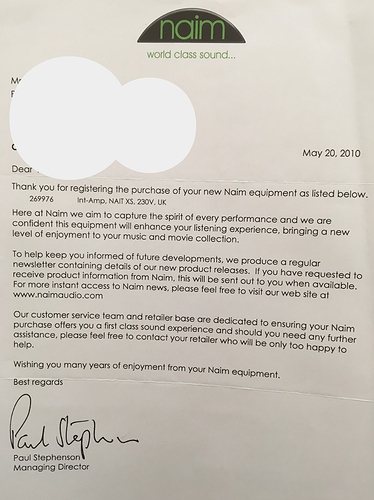 I remember receiving this letter, and I still can’t tell if the signature is real or just printed.

Naim don’t do this anymore. I did suggest to Clare that it was a very nice gesture and all part of the experience of Naim ownership; that you are investing in something that will be supported for many years. Perhaps marketing will reconsider at some point.

That amp served me well until 2017 when I traded it in for an SN2. Of course a year later and I found myself working at Naim but that’s another story.

What was your first Naim and do you still own it?

3 years ago I bought a UnitiLite and could not believe how good it sounded compared to my old system. I am now 552/500 so you can imagine what that sounds like to me !

I liked those letters too for the same reason as you. Who is Claire?

The one person who can tell you if the signature is real and not printed is PS himself, though looking closely at it at full size and larger, it appears to be genuine. There is some ‘tone’ (appropriately!) in the letters and the ink edges seem to be slightly feathered into the paper too.

Sherlock hat off, I don’t have any of my first naim, but as posted elsewhere, here is the receipt for it.

The address removal on my paperwork took me longer than yours did! 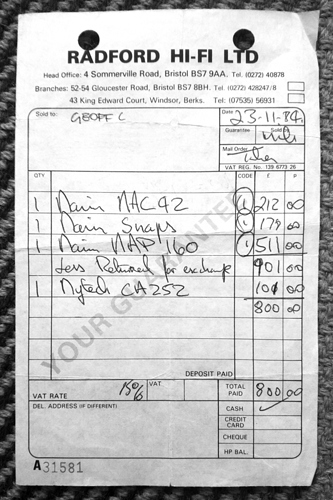 Clare Newsome, Ex what hifi editor and now head of pr at Naim.

Mine was a used Nait 5 which was replaced by a brand spankers Nait XS when they first came out. Wonderful amp.

My entry point was around 1998 with a NAIT 3R. A good friend of mine who had a massive stack of Olive boxes in his main system (which I recall sounded otherworldly to me at that time) also had a NAIT 3R which he’d got to use in his kitchen or shed or whatever it was and wasn’t using it as much as he probably should have been. I persuaded him to let it go and began to wrap various bits of kit around it and nurture it in to a more polished system. That was followed by a NAIT5 at which point I had more funds and took it more seriously from there and here I am today with a Supernait 3 continuing my appreciation of the NAIT family.

What was your first Naim and do you still own it?

First Naim was the separates in the form of NAC202, NAP 200 and napsc. They were bought used in 2010. It’s still with me though sitting on the display rack most of the time.

It’s still with me though sitting on the display rack

My first Naim was also a Nait XS, just over 10 years ago alongside a CD5XS. I went to the dealer’s intending to buy a Uniti (the original) after reading an enthusiastic review by one A Everard sometime of this parish. But a quick listen to the XS pairing changed that.

My goodness, what a lot of black boxes I’ve been through since then! But I do still have the CD5, though local and Qobuz streaming doesn’t see it getting much use these days.

My first Naim was a 1985 Nait, I’ve been through a lot of Olive boxes and a few black ones since. It’s a big change, in recent years when I’ve registered boxes online I’ve not even had an email acknowledgement, which given that the registration didn’t seem to give a confirmation either has been a bit unnerving.

I’ve also got all my old letters I received on purchasing of new Naim products.
I remember thinking at the time what a fantastic piece of customer service, made me feel pretty special.

Anyway, first purchase was a Uniti back in early 2010, absolutely loved it.
Sold it a few years later when the slippery slope of the upgrade path got me

Uniti 1 for me too as an all in one for the front room. Got the bug and now have ND5XS, XP5XS, NDAC and SN3 in the main room as well. Uniti moved on recently and replaced by a pre-loved SuperUniti. Probably end state for me due to a combination of diminishing returns and no more increases in box count!

My first kit was a 2nd hand 42/110, early 80s if memory serves. Used them with rega planar 2 and 3 through mordant short ms ? two lots of royds and ela mrk 2s, still got them under the bed, must get them off to class A as they have never been serviced

My first real audio kit when I was 18yo (46 years ago), was a Mac setup. MX113 tube pre with tuner, and an MC2105 SS amp. When you’re only 18, that seems like a pretty nice rig, but I just wish I hadda known about NAIM gear back then. That would have save me a whole lot of time and effort and cash, over the years.
I have an SU and an SN2 now, and my musical life is just so much simpler.

I still lust after a new old stock NAIT 2, discovered in some cupboard at my friendly retailer and offered to me at a can’t be refused price. I’ve always had a fond relationship with the NAIT family and missed out on the early versions entering in to the journey with my NAIT 3R initially.
I still think Naim should do an anniversary edition based on the same external industrial design but with modern internals and connectivity. Ever the optimist!