Does anyone own or have a photo of the 1976 Naim NA 602 speaker?? Im trying to find out more about this speaker but as yet, have found very limited information about it.

The NAS 602 was very short-lived and there can’t be many pairs out there. It was built for Naim by Mordaunt-Short, introduced in '76 but discontinued by Naim within a year, once the Linn Isobarik was made a viable project. IIRC, Julian felt the Isobarik was so much better there was little point continuing with the 602.

Ah - well, yes I owned a pair of these speakers for many years, and they were pretty good, particularly for the time. I bought them from Russ Andrews in Edinburgh (they were serial number 2). I had to replace the tweeters a number of times, and eventually there were no more of them left (Goodmans, something like DM101, though I have probably mis-remembered that designation). I also had to replace the Mordaunt-Short mid/bass drivers. The foam inside the speaker cabinet went really bad - it deliquecsed eventually and I had to replace that, also (I couldn’t find an exact replacement). Similarly the foam on the front of the speakers deteriorated and I replaced that. I turned them into active speakers by taking out the crossovers and feeding the wires from the speakers to a panel I made on the outside, and drove them active with a NAP120 and a copy I made (a terrible thing to admit, but I don’t suppose Naim will pursue me now, after all these years), plus a Naim electronic crossover of some sort (it was in a really unusual box - long and narrow, with a screw-down lid). After a while I replaced the amps with two NAP250s.
I bought them for somewhere around £200 or £250, and sold them a couple of years ago, maybe a bit more, for £50.
I’ll see whether I can dig up a couple of photos when I get the chance.
Steve

Interesting about the Isobarik. I heard the Isobariks (active) at the time I bought the 602s and was well impressed, but they were very expensive - the 602s were cheap enough for me (though it did mean I sat on orange boxes rather than proper furniture for a while, but you have to concentrate on the important things in life, don’t you?)
Russ Andrews didn’t have the 602s in stock at the time I listened to the Isobariks. I wonder whether I bought them after they were officially discontinued? It would have been in about 1975 or 1976, IIRC.
Some time after I bought the 602s, a friend of mine (now my brother-in-law) bought a pair of speakers from Roy George (I think it was he) - basically 602s but built into boxes made of lignocrete. They were wider than the 602 boxes, and possibly not quite as deep. He still has them.

Thanks for the info. I have been searching for information most of the day about these speakers but there isn’t much out there about them…i haven’t even managed to find a photo of them to compare to a set of speakers I just brought that I think may be this model. 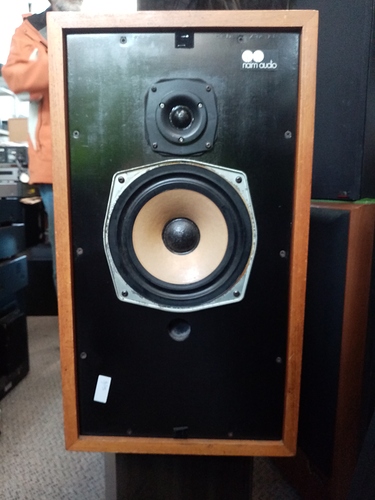 I forgot to mention - when the Goodmans tweeters were no longer available, I replaced them with Scanspeaks of some sort.

Did they sound better with the Scanspeaks?

That looks very similar - but not identical. The Mordaunt-Short bass/bid looks similar to that, but was all black. That looks like the Goodmans tweeter, and with the same foam gasket. But there was no port in the 602 (That looks like a port below the mid/bass driver). There was, IIRC, a strip of Velcro hooks all around the baffle. The cabinet looks similar. But I don’t think these are 602s. Could they be 702s?

This was written on the back of them… 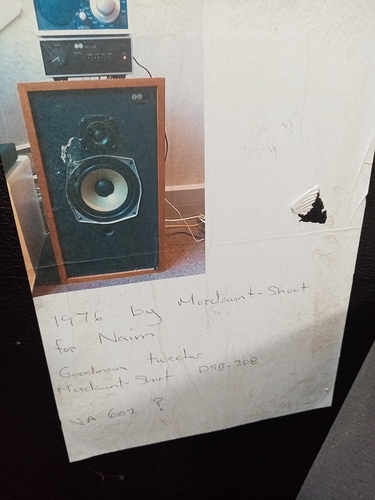 I think that they did, but of course I wasn’t really able to do an A/B comparison. I can’t remember which model of Scanspeak they were, though. I think I bought them from Wilmslow audio, or some such place. It was many years ago.

I’m fairly sure that they are not the 602, mainly because of that port below the Mordaunt-Shorts. Someone from Naim should be able to identify them, though.

Thanks for all your information Beachcomber… Much appreciated

Not the prettiest speaker ever made. That’s for sure.

I think they looked OK - particularly at the time. Almost all speakers at the time were simple rectangular boxes (with some exceptions, e.g. Jordan Watts). These were in the same mold, simple but well-made, teak veneer (real wood, not plastic), with a fairly simple foam grille, relieved by a vertical shallow channel in the foam set a few centimetres from one edge, Naim badge stuck to the foam in the channel near the top. The speakers were mirror images. They looked fine.

The bass/mid driver looks very similar to the one used in the Mk1 SBLs (albeit a different colour). I think that was also made by Mordaunt-Short.

Yup, definitely looks like a Goodmans Tweeter (I once had a pair of Dimension 8s here) and M-S mid/bass driver.

But not the 602 cabinet, and a slightly different mid/bass driver - in colour, at least.