Hi, quick question on the relative performance of a NAC 282 powered by a hicap DR vs being powered by the output from a NAP200DR.

I’m building a dual music/AV system and have a NAP 250DR coming which will be the main power amp for the music system/front stereo pair. I’m considering a 282 for the preamp and rather than spending the extra £1500 on the hicap, in theory I could spend an extra £500 on a nap200DR, be able to power the 282 and have an extra set of Naim power to use in the AV side (assuming of course, that the NAP200DR’s power outlet works whilst the amplifier is not under load)

I appreciate this may sound like a bit of a random path (it’s an interim step on a longer path), this would still leave a path for updating the power supply at a date in the future without having to replace anything.

Appreciate any thoughts on the matter

The 200DR isn’t as good as the dual rail supply from a Hicap, but it still does a decent job and I enjoyed my 282/200DR for a while. On the other hand, if you’re going for a 250 maybe just get the HicapDR first and then you’ll be ready for it.

Have I understood correctly that tou are contemplating using the 200 to power the 282 while running it into the 250? That would require some rather strange custom cabling to say the least.

Kind of yes… the end game will be to have both the AV and music systems powered by Naim amps, however this is a long and expensive journey.

The music side will be the NAP250 and NAC282 (have seriously considered 272 as interim), using the AV input to take a feed from my AV processor. This uses standard cables (Chord Shawline from processor into preamp).

As I move to a 282, I need to power it and hence the thoughts around whether a NAP200 will do a decent job.

From a music perspective, the NAP200 would be solely acting as a power supply into the 282, no speaker output at all. Again this would use a standard Naim cable.

From an AV perspective, the NAP200 would cover the centre channel then onto the rears (long term I appreciate the front centre should be powered by a NAP250DR too, in order to match the stereo front ).

I see where you’re coming from. I guess it would need some weird sort of Z shaped cabling arrangement, and also might make a mess of the grounding.

and doing this for AV… 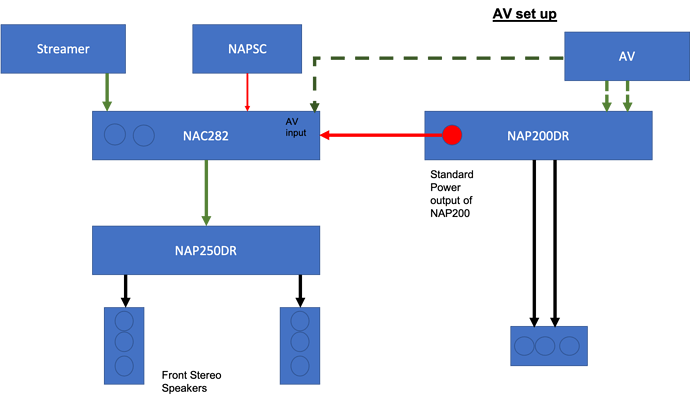 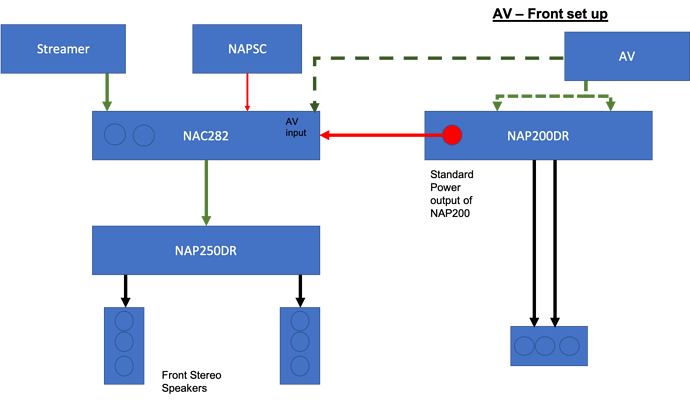 The complication is that the single 4 pin DIN on the 200 carries both the signal input and the DC power output in the same cable running to the preamp. So you would need to make up two cables into a single DIN plug to split the signal from the power.

I can’t remember exactly how the various input and output options on the 282 are configured, but you might have a similar problem at that end too.

Ahhhh, I see the problem… Totally get it! Thanks for the steer…
Back to the drawing board

Better start saving for that Hicap

Hiccup in this case

Looks like you may be rethinking the idea but as I wanted to know what each piece added, I first ran my 282 powered off a 200 then after a couple weeks added the HCDR. The HCDR is a significant upgrade in performance vs powering off the 200.