My 300DR just shut itself off. I opened the fuse box where 2 spare fuses are located but where’s the fuse to be changed? I pull out the full fuse assembly or I need to open the box?

I believe what triggered it could be the one-off switch didn’t stay when I was turning it on and pressed it in directly after. However it played for a few minutes after this so

Both the below measures OK. 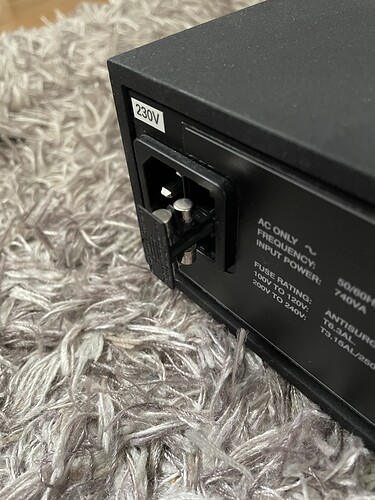 You don’t need to open up the case. The two fuses shown - the one nearest the case is the fuse in use (and maybe blown). The other is the spare. Just swap in the spare.

Are you sure the fuse is blown and the switch just didn’t latch properly though ?

You take the first fuse to come out and that is the broken one, then you put the second fuse to come out in the place the first one was and push the holder all the way in again. The contacts are just inside the fuse holder plastic, so you don’t need to open the box. In fact opening the box will achieve nothing at all!

They both measure OK with summer on the multi meter. Hmm.

It’s a good idea to ask your dealer for a couple of spares. Just in case it blows again in future.

Is there a fuse in the plug? Check that. Also try latching the power switch again as James said.

Is the power button latching properly?

Removed all cables including powerline and put it back and now it started again. Fingers crossed

Is there a protection circuit that could have been triggered?

Could be the case. You mean it doesn’t stay in as should?

If that would be an issue, can I do something about it myself? Turn it on off repeatedly without power connected?

It died during playback (low volume) so might not be it. Maybe the powerline. Let’s see what happens. Scary.

If the power cable has worked loose, this can cause issues and blow the fuse i.e. make sure it’s fully seated and not under stress.

Fuse was ok but died during playback.

Unplug from the mains. Then try some rapid pushes on the switch to try to clear it. Then try latching. If it still won’t latch then call your dealer.

Is there a protection circuit that could have been triggered?

There’s thermal protection built in which is triggered at 70°C so unlikely to be this if playing at low volume, especially with the 300 as it’s fan cooled.

If you mean a Naim Powerline mains lead, it does need a good hard push to connect it properly, so maybe check this.

In a one box amplifier it’s easy to interrupt the mains with a thermal trip near the heatsinks if things get too hot.
With a two box amp like the 300 it’s a bit more complex as the heat source & mains power are isolated from each other.
The 300 uses three tier thermal protection - semiconductors track the temperature of the heatsinks & run the fan at an appropriate speed. This is normal operation.
If the fan cannot bring the heatsink temperature down, 70 degree trips on the heatsinks cause an imbalance on the incoming supply rails. These rails are monitored by the power supply & a resistor strapped to a further trip within the PS will heat up & interrupt the mains. This process takes about 80 seconds & power will be restored once the resistor cools.
A further 90 degree trip on the amplifier chassis will place a direct short circuit across the supply rails & blow PCB fuses inside the PS.
So, in summary, I think that the double press of the switch caused an imbalance in the supply rails & it triggered the resistor to heat up. That’s why it played for a while & then shut down.

Thanks a lot for a thorough reply

It sounds reasonable for the situation I entered with a double press. I’ve had tube amps in the past that blew up when shut off and on to fast and I know there are same warnings with transistor amps and I wouldn’t normally do it but this time the on off button didn’t stay on and my immediate reaction was to hit it again when I probably should have waited 30s or so. I’m happy the protection and amp design solved it