I was reading the thread on 500 vs 2x 300 with interest as have never had the opportunity to compare the difference between similarly matched passive and active set ups before.

I’ve searched online regarding the general benefits of an active setup and wondered if there are significant differences when using a Naim system and if so what they might be? For example comparing a single passive 300DR with 2x250DRs/Snaxo?

The active setup is naturally going to be more boxes = more expense so would have to justify that increased cost. I understand speaker matching also becomes more important than with passive, so that’s another consideration.

Given the vast majority of Naim users seem to be happily running passive systems, is active worth pursuing as a potential upgrade path and if so how supportive have dealers been in enabling A/B demos?

The problem with Naim active you are restricted to the old Naim speakers that can go active, or if you want new then just some of the Kudos range. Why not listen to some passive Kudos speakers, if you like then it might be worth exploring. Dealers are unlikely to be carrying many old Naim speakers to try.

You can use any 3rd party active crossover with Naim and therefore a broader range of speakers.

Prior to the crossover, the NAC has already done signal normalisation required for a NAP. As such adding a 3rd party crossover shouldn’t be seen as anyything that fundamentally changes the Naim sound. After all, with a passive crossover, you’re already probably using a non Naim crossover. Going active just puts it before the power amp. In both cases, the speakers have a non Naim crossover in their signal path. Therefore, I’d not hesitate to go active if that’s where you want to go regardless of whether SNAXO supports them.

Choose speakers you like best passive. Then go active if they support it. I don’t recommend going out of your way to choose speakers simply because they can have the crossovers removed.

As an addendum, there’s a cheaper simpler way to go active; use single driver crossoverless speakers. Then you can drive them with just one amp coupled directly to the drive units. All the benefit of active. None of the complexity. This is what I do. Omega speakers have no crossover.

Can o’ worms time! There is quite a broad range of views on active v passive.

I probably shouldn’t have gone active two and a bit years ago - although the results were pretty darned excellent, I allowed myself to be persuaded without having heard what it was I was moving to.

Anyway, the range of opinion. I have heard kudos 606 and 707 with a single 300 and then active with two of them. I thought that there was certainly a significanr improvement from active - but let’s face it, with an extra 300, a snaxo and supercap and extra speaker cable (and shelves) you are at the cost of a 500 even instead of the first 300. And I haven’t done the comparison of 500 v a pair of 300s on anything…

Oops back to the plot! At the kudos dem there was one person in the room who could not hear any improvement.

At the other end, I know someone who went from a single 200 into SBLs to two, and he was absolutely gobsmacked at the improvement, to the extent that he was cross with himself for not having made the change sooner

I have been messaged by a dbl owner (active with 3x500s) who has a friend with Titan 808s powered by a single 500. Although they agree that 3x250s are better, they think the difference is marginal. However I understand that Peter Swain of Cymbiosis prefers the active with 250s quite a lot

I have come to the conclusion that for me I will be sticking with passive on the 808s - and what I am getting back from trading one of my 300s and a snaxo and supercap goes a long way towards the extra cost, and I will save shelves that I need to store my various bits of kit. It also helps to spread the boxes out more and stop cables touching at the back, so I think keeping it all tidy and optimal will be simpler and the 808s are so big that saving volume of black boxes seems a good move anyway

Thanks Tim that is a very insightful post and quite telling that you’ve reverted to a passive setup.

I’d be considering moving from a SN3 to 2x250 or a single 300. The difference in cost is manageable and it’s still two boxes (would partner with a 282 or more likely 252, so already expecting to add some boxes!)

The big issues for me would be firstly having access to a meaningful opportunity to demo active vs passive with the relevant system and secondly having to take a jump off the deep end with speakers that support active.

Hopefully if demo days are back up and running next year that might help with the first challenge, but it’s not really going to compare with a home demo. The second issue is possibly easier to address. As mentioned earlier in the thread auditioning active capable speakers passively as a first step seems sensible given that if active doesn’t provide the uplift expected you can revert to passive and not have to find new speakers.

No rush either way and lots to still consider… the way my kids keep complaining about my loud music investment in a more capable headphone arrangement is shifting to top priority!

You can do a cheapo active into kudos using sn3 and 250 I think. They demoed this at Bristol show I think

I think you have reached a very sound decision Tim. My ND555/LP12//552/500 with full Super Lumina rig into passive 808s is just superb in my listening room and I hope your set up works as well for you too.

For example comparing a single passive 300DR with 2x250DRs/Snaxo? 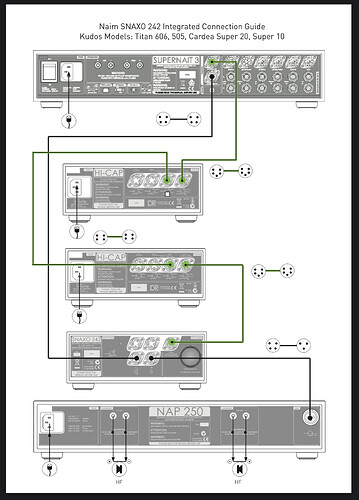 Is there a lot involved in setting a snaxo 242 up to suit kudos speakers?

Do you need to change electronic components etc?

And that for me was the surprise of the day, i mentioned to Charlie he had to go listen if he was ever allowed away from the Statement room.

@mickdale isn’t there a missing 250 in that diagram or is the idea you use the SN3 for LF output?

I’m not sure I’d be tempted with that setup either way. It seems if you are going all in on active then go all in!

Interesting to hear that the general sentiment seems to be the 252/300 DR is a more refined and relaxed listen than 282/250 DR. Wonder if those that like a more involved sound would tend towards the later combination and active as a matter of taste?

Yes it’s a cheap way of going active, using the power amp section of the SN2 or SN3.

Thanks, Michael. Turned off overnight on Thursday for yesterday’s planned power cut, but getting back again to full strength today.

I have been working in front of the 808s for the last couple of weeks and, being very close to a decision in favour of them, for the first time feel mentally ready to start working back in the loft again. Lower quality sound but proper working setup (two large screens instead of just laptop). Since the improvement in the last few days I have had a mental shift - last weekend I wasn’t convinced at all. I want to try the Kudos speaker cable though

Its been said many time, if you are using Naim speakers like sbl’s, SL2’s, etc, then active will sound better and the better amps, better again, this is mainly due to the standard crossovers that come with the speakers.
More modern speakers then things become much more complicated.

Sounding better again today (managed a bit if volume while on my own in the house for a few hours) - still going to have them moved out a bit more from the wall when Pete can manage to get here, but they are already sounding PDG!