4K and the unexpected sound upgrade

Hifi is my passion and my home theater is more of a hobby. I’m typically years behind the current specs and there’s always a few surprises whenever I make an upgrade. Latest update to my home theater is a Sony 325ES 4K projector. 4K has been on my radar for years, but the cost of entry was always more than I was willing to spend. I got lucky and picked up a 325ES as a demo close out for less than half retail. The salesperson mentioned I’d need “high speed” HDMI cables, but I was not clear on what this meant? I use Chord C-Stream HDMI cables and they say high speed on the jacket so I figured I was good. Well there’s high speed and then there’s 48gps. I quickly learned that in order to take full advantage of 4k, HRD and 4:2:2 color space I’d need to upgrade my cables. Thankfully these are easy to come by on Amazon at a very reasonable cost. Using my 4K Apple TV the images are simply stunning. Shows like Amazon’s Lord of the Rings: The Rings of Power or HBO’s House of Dragon look incredible. I was not expecting a sound upgrade. For whatever reason upgrading to 4K enabled Dolby Atmos sound. My system is 5.1, but very quickly I could tell the audio quality was superior, more detail and better separation between the front and rear speakers. Who knew?

Yes correct spec HDMI cables improve vision and sound considerably, but reasonable cost on Amazon won’t get what 4K is capable of and once you get to a certain level and above, it’s the sound that improves, not the picture.

Hi, yes more of the streaming service providers are supporting Dolby Atmos as the surround sound container.
However Dolby Atmos supports currently two codecs; Dolby Digital Plus and Dolby True HD.
The former is is lossy compressed like mp3/AAC and the latter is lossless like FLAC.
Currently as of July this year no major video streaming service was supporting Dolby True HD. Possibly because of the demands on bandwidth.

You might want to check your TV supports future Dolby TrueHD Atmos streaming content… then we could actually be talking real hifi sound for films.

And that cable would be…?

Ideally you want to be using an HDMI 2.1 compatible cable or higher to support the bandwidths (48gbps or higher). Lesser cables might work but you will need to drop the colour space compression up or reduce refresh rates….

I’m using a 48Gbps Certified Ultra High Speed HDMI cable. This is the only way to get 4:2:2 color out of the Apple TV4K.

Yep… that is what you need

Compared to the HD feed from my Apple TV, the audio quality did improve when I switched to 4K and starting getting Dolby Atmos. There must be some technical improvement?

Not one of the services deliver in 4:2:2 they are all encoded as 4:2:0 as is Blu-ray. 422 is only of use for computer gaming currently which can output at the higher chroma sampling. You don’t gain anything for TV at the moment not likely for some time. The advanced output on TVS and setups is only to get the higher frame rates which HDR services need as they all generally output at 60hz and that only comes with HDMI 2.1 spec.

Switching my Apple TV from 4:2:0 to 4:2:2 made a substantial difference in the picture quality. I’m a professional Cinematographer so I have an eye for these things. 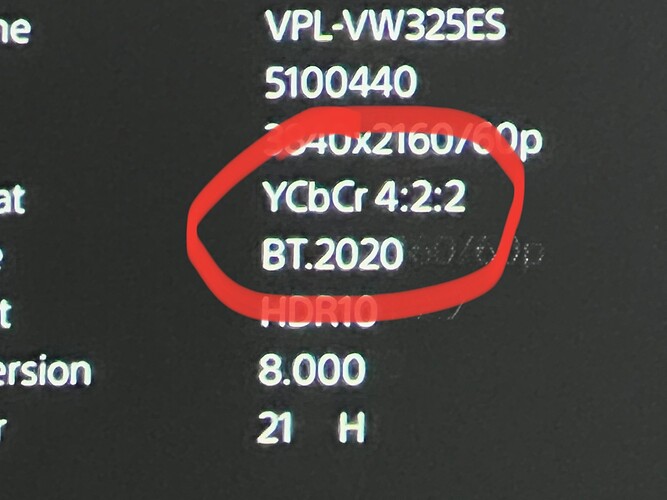 I’m a professional film editor so do I and I have seen no benefit of it. You can’t add what’s not there to start with. Same as I can’t make an aac or mp3 sound better by making it pcm. What’s gone has gone, upsamping isn’t going to bring them back. UI elements will be improved content is what it is.

But….That said all tvs have to upsample back to 4:4:4. before the final conversion to RGB to display the image. Native 4:2:0 was only possible via hdmi with hdmi 2.0 so all devices prior to this had to upscale to 4:2:2 for the TV then to upsample to 4:4:4 and then RGB to display them prior to this. Now all TVs pretty much support 4:2:0 and can perform this task without increasing bandwidth needed for HDMI.

So in your case it might be that you may like visually the artefacts of going through two upsampling processes from 4:2:0 to 4:2:2 via ATV then 4:2:2 to 4:4:4 then to RGB by your TV. I guess like some seem to think upsampling to their DAC makes it sound better than letting the internals of the DAC do it. Can’t say either makes a difference for me.

Yep you don’t need 48gbs cables unless your upsampling to 4:4:4 HDR on the playback device or needing higher than 60fps at 4k and HDR. So unless you use a games consoles or gaming pc it’s just not needed.

The problem with certified 48gbs cables is that they’re not certified at all. Cost doesn’t seem to be a guarantee either.

I see multiple differences in quality, starting with skin tones looking more realistic, far less chroma noise in highlights, and the overall image was smoother, less “etched” looking than the 4:2:0 output from the Apple TV. Whatever is going on the new HDMI cables allowing the 4:2:2 output made a difference I appreciate.

It’s been fun to see my camera (Arri Alexa Mini LF) being used in so many of these high-end TV shows.

It’s pretty much used in everything in Film and Episodic these days only had 2 in the last 3-4 years use something else as the primary camera. Arri have their colour science and user experience nailed. A colour scientist colleague of mine went to work for them recently to help in their colour dept. Be interesting to see what their new v4 brings to the table.

So what do the streaming services deliver to my Apple TV? Mpeg or something else? The file must be very good and I’ve been astonished at the overall picture quality. Amazon still has problems with banding in very dark scenes. Everything Apple delivers on their subscription channel looks and sounds amazing. HBO Max looks very good overall.

The new ARRI Alexa 35 will be the camera of choice for TV and film production for many years to come. Arri made advancements in both color and dynamic range that put it at the top of the digital cinema range. I’m friends with the product manager and its been fun to see his new “baby” finally come to market (3 years late due to covid). I do like my Mini LF as it provides a unique look with it’s full frame sensor. It’s been fun to use something new as I’ve been shooting super 35 for decades.

Here’s the new camera for Forum Members to see. 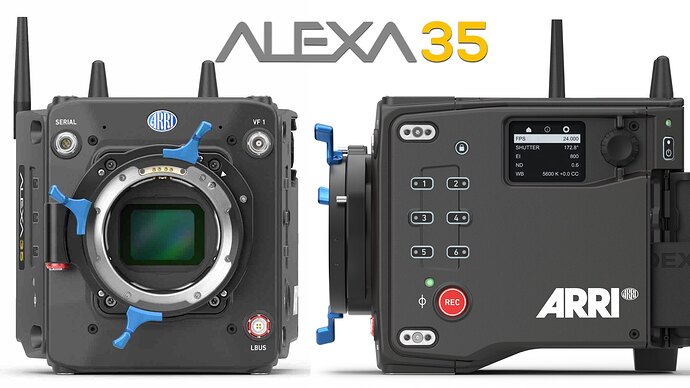 60fps at 4k and HDR. So unless you use a games consoles or gaming pc it’s just not needed.

My 10 yr old has just bought an X-Box Series X, and now needs a desktop monitor for it.

From what I can tell, it seems as though a 1440p screen with a refresh rate of 120Hz will be suitable, with Freesync Variable Refresh Rate.

They use HEVC which uses h265 encoding designed for UHD and beyond but keep data rates low. Most services such as Netflix, Amazon and Disney+ don’t go much higher than 17mb/s. Apple TV + has been rumoured to use higher bitrate for its streams but I can’t say I have noticed on my sets will have to check my network stack to see. They all use a variable encoders which changes bitrate fed to tou based on the current bandwidth available so they can suddenly drop if your internet becomes slow and the picture quality drops massively in some case.

It uses 10bit colour encoding using 4:2:0 sampling as its pretty much visually lossless which helps reduce bandwidth for domestic usage. it can maintain HDR imagery and can be used with Rec709, BT2020 or DCI P3 primaries. It’s the move to 10bit and HDR for me thats been the biggest gain over previous technology, 4k I can live without but HDR is the next level and I find it hard to go back to SDR now.

Audio tends to be encoded in Dolby Digital + which has higher bitrates than older Dolby Digital. Perhaps that’s what you where getting before if using ARC to get audio back to your 5.1 a lot of older devices could not send DD+ over ARC you needed eARC. The newer projector probably does so you get the advantage of this. Non 4k has been using the same DD+ for years it’s not really changed only they added Atmos which is available on non 4k as well.

Im living in Perth Australia and the Netflix service here only gives us 5.1 Dolby Digital sound whether it be on 4K HDR, 4K or HD formats all programming (films, series, documentaries etc) are all 5.1 only, never seen Dolby Digital Plus or Dolby Atmos soundtracks here.
You must be getting a far better audio quality service than Australia.