We did a full retrofit on our house in 2017 and I was anxious to get the most out of my system and once again those wonderful guys as Signals came up trumps and Andy (as a paid consultant) re-assembled my 9 tiers of fraim and dressed various burndies and connected my n-sub via speaker terminals.

To be honest I’ve been afraid to touch it since except to change out the odd non-Naim source component, but it’s been static since 2019.

Only to hit a snag pretty early on in proceedings a burndy on my 552 which I cannot budge - nor can my 28 year old son! 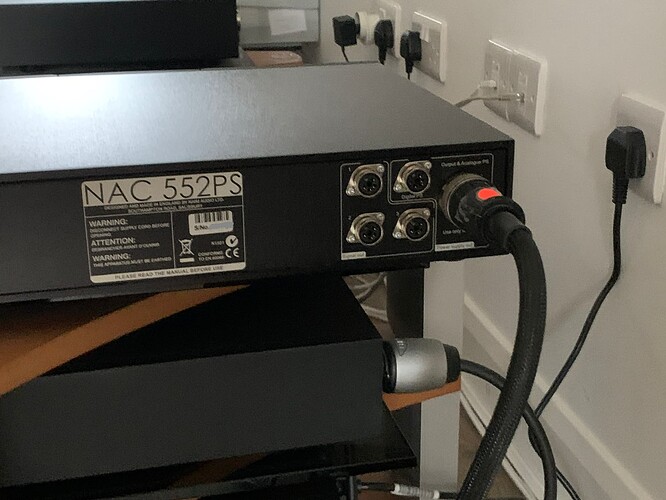 So as no-one had it locally I’m waiting for Amazon to deliver a strap wrench which hopefully will give me the necessary leverage to release it. - The 300 burndies are okay as one can get one’s wrist around them but the closeness of the other inputs on the 552 (which I did eventually manage to dislodge) and 552 PS mean I’m using fingers which just are not strong enough. 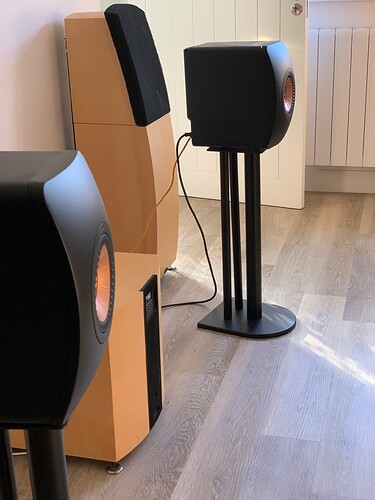 2 power chords and one ethernet cable, it does make you wonder when you see the amount of cables (that I could remove) to connect a pre and power amp! 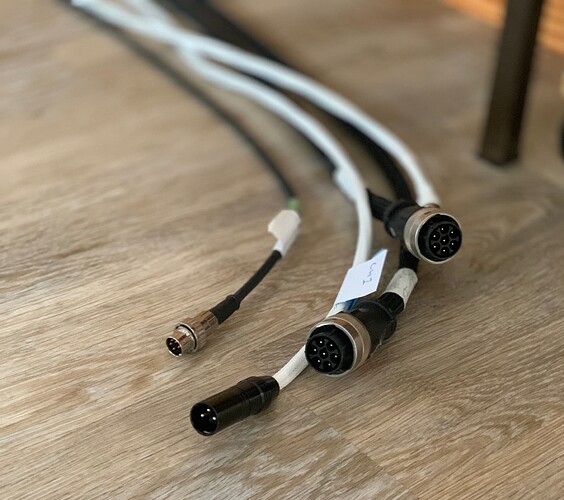 I use one of those rubber gripper thingys to twist the burndys off. The rubber sheets that are used for opening bottle caps. Works well.
David

Thanks for the reminder, full strip down planned for next week and ordered one as I remembered last time it took all my strength or lack off to open a burndy on my 552.

I also failed to remove the nuts on the Fraim base as I must have previously tighten them up too much, so will try some WD40 this time.

one of those rubber gripper thingys

Or… try just a rubber band wrapped around a few times.

I have just checked my Burndy (just the one…). Its Locking Rings turned easily and I was able to pull the plugs out.

My XPS (fuse) survived being powered down and back up again, too.
Never rush this…

I’ve had this a few times and my solutions have been:

1- if possible (and with due care), get the unit to ground/on to a kitchen work surface with a towel underneath, to stop sliding i.e. somewhere where you can get better leverage.

2- get any kink/tension out of the burndy

3- use a very slightly wetted cloth/strong kitchen towel to wrap around the metal ring, as this gives more grip IME. Obviously, dry the ring once released.

Like you, I’ve considered reaching for my tools but I’ve never needed them. Perseverance being a virtue IME.

Well this Boa constrictor did the trick - on the third attempt, I found it difficult to get it to take as it’s awkward (for me) to get at. 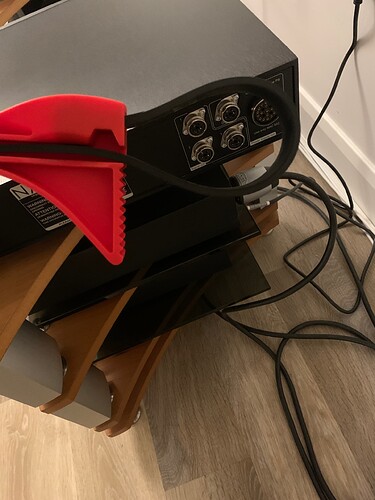 I have twinged my back with moving these boxes or the flopping of the burndies.

Looks like I’ll have to stick with the KEFs for the weekend and use the time to make sure I can put everything back together again.

First time in a couple of years and strangely rewarding.

Tape measures and spirit levels keep the OCD demons away.

Will I need a spacer under one of the LP12 feet?..…let’s see (“well it was level without one when I dismantled it……how can it not be now???”

We’re a strange bunch aren’t we? Amazing to see what gives us satisfaction

And then, of course, there’s the subject of cable dressing. 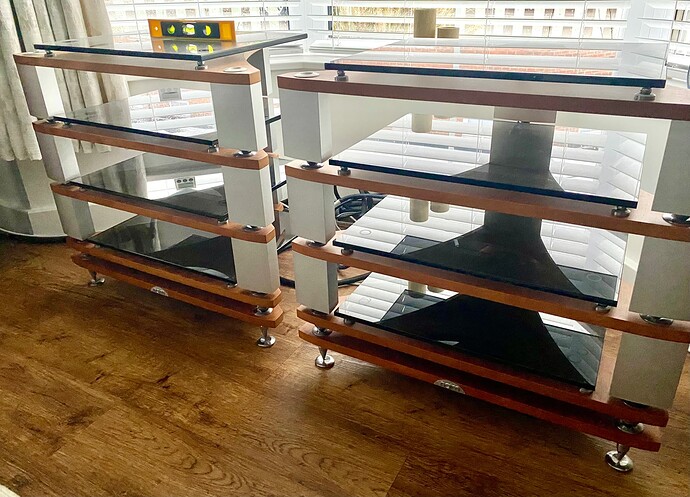 If the Linn level is out of whack, suggest check the ball bearing holders. I often put these in the wrong way up !

I set an initial level for the base and load kit as I go, cabling at the same time, and then level-out the crucial top shelf via the feet at the end.

I must say I don’t get much enjoyment from this, it’s a chore that gets harder as my bones grow older.

And during the process I always have the nagging fear I’ll fcuk up something.

It will be relief rather than satisfaction when I (hopefully) get things back up again.

I must say I don’t get much enjoyment from this, it’s a chore that gets harder as my bones grow older.

And during the process I always have the nagging fear I’ll fcuk up something.

Mission accomplished. Sounding superb.
Slight increase in distance between brains and brawn stacks and better Burndy routing has made a positive difference. No shim/spacer needed under Trampolin 2 either. Happy. 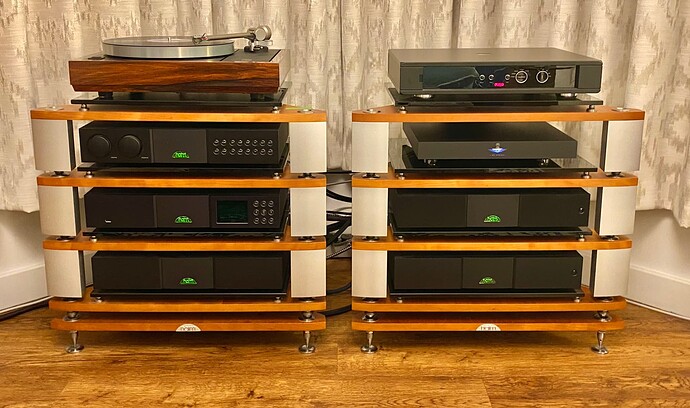 Maybe you should offer your services to the Naim community?

Same here. A few years ago I did a rebuild after an interval of several years and was so struck by the improvement that I resolved to do it more frequently. Last spring I did a full rebuild, which yielded more than the expected improvement (I tweaked a few details on my souped-up Tripod stacks, to good effect), but I was so wrecked after it that I have no problem going at least 2 to 3 years without trying that again

Got this far today but my back is telling me to stop now and lug everything back on the fraim tomorrow. 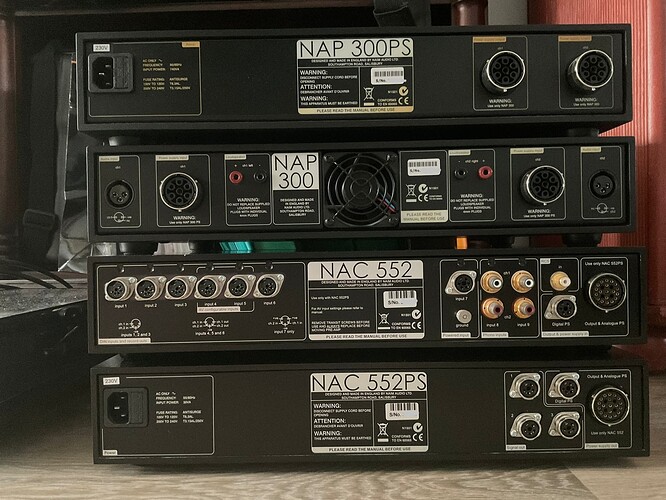 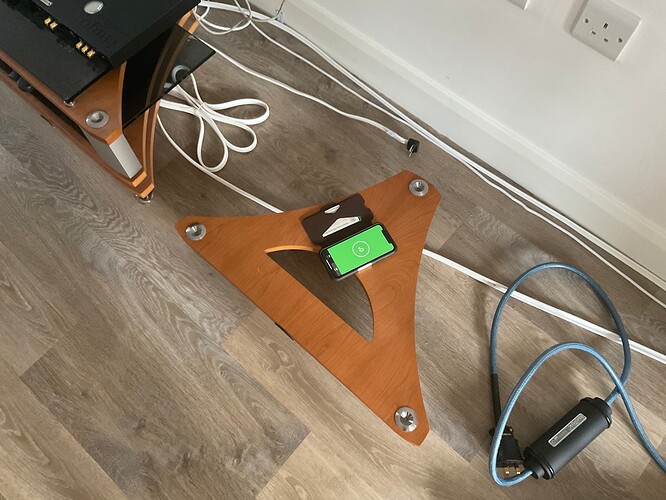 Astonish glass cleaner already has the Naim pieces sparkling, and will tomorrow have the glass shelves sparkling. WD40 at the ready to polish the stainless steel cups and bearings etc.

Getting a lot of slagging from my wife and kids about the care I’m taking in my otherwise less than sparkling existence.

Got there in the end! 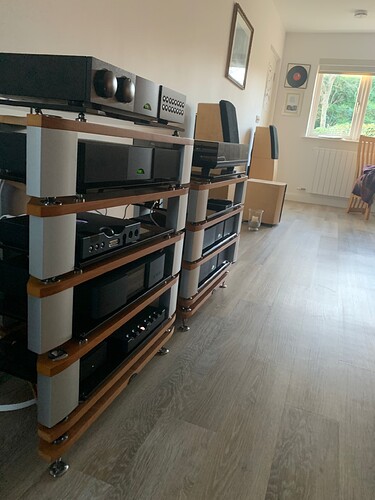 Now to do some listening.

2nd level John! spike not in cup… your gonna cuss!

And 1st level on right fraim

2nd level John! spike not in cup… your gonna cuss!

Think I might rebuild my Fraim sometime this month as I usually due it every year but its been a couple of years since the last time!

Mental note to check everything is still level when top fraim is added…… and to take more bloomin’ care. 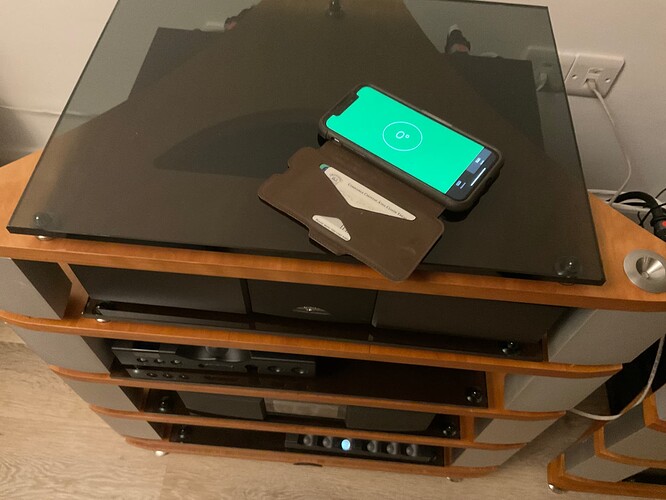 Take 2 as they say 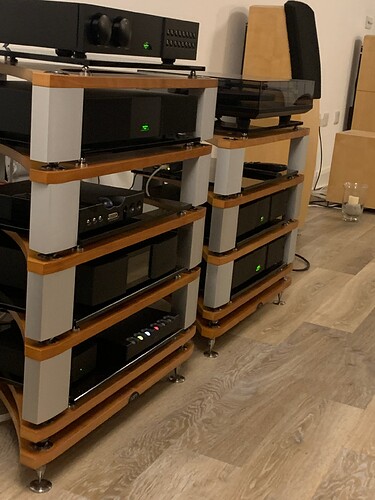