A little experiment with the SL2s

My Linn Akurate DSM has Exakt outputs (a proprietary Linn protocol, a kind of “super-TOSLINK”). So far I had no use for them, but now I had the opportunity to try out an Akurate Katalyst Exaktbox (a kind of a digital crossover).

I switched my system off, disconnected my SNAXO/HICAP, connected the Exaktbox to the DSM via ExaktLink, created an account on exakt.design (a Linn subsidiary if I understand correctly), created a crossover filter for the SL2 with 3kHz and 3rd order roll off/on, downloaded the filter via Linn Konfig onto the Exaktbox, reconnected my amplifiers to the matching analog Exaktbox outputs (be careful there!), switched the amps on and slowly turned up the volume.

And voilà: Active (but not yet fully exakt) SL2s, without a SNAXO but with a digital crossover and Katalyst DACs!

So far no blown tweeters, which sounds like a good first achievement. Now it’s time for the assessment if I like the result.

Does it allow you to tweak levels and phase (time delay)? If so, get a copy of REW software (“Room Equalisation Wizard”, though it doesn’t control anything) -available free of charge - and a measuring microphone (the one they recommend is around £100). You can then measure and see the response, and so get the levels of the treble vs bass correct, and check that the phase is the same at the crossover point, if necessary adjusting the time delay to one driver to fix.

Next: does the Exactbox allow any other DSP adjustment? If so you could also try reducing any major peaks to even out the frequency response - as much or as little as sounds right for you. You could also try reducing any troughs, but with caution as that will reduce the headroom of the amp for transients, as every 3dB increase in level at the trough point doubles the power from the amp when playing a sound at that frequency - most particularly never try to reduce a trough caused by room cancellation effects.

The Exaktbox can do a lot more than just band-filtering; Linn claim that they can essentially eliminate all kind of phase errors of a speaker with this (called „Exakt“ by Linn.)

One would need impedance sweeps with REW of the drivers. I‘ve done that for my SL2s last year, here an example from the bass drivers:

However, generating the required parameters from the sweeps is not so easy, and I‘m currently stuck at that stage.

So, it‘s quite easy to replace an active crossover with the Exaktbox. Eliminating phase errors („Exakt“) is a bit more work. Tweaking levels should also be possible.

Here’s a screenshot from exakt.design: 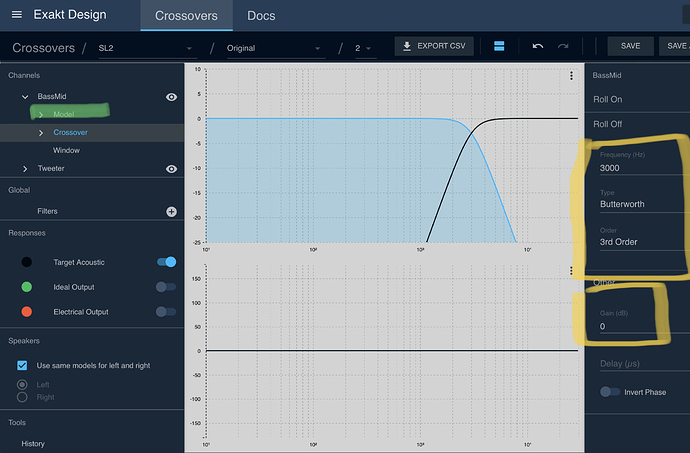 You also can set the gain and a delay per driver. The complicated stuff happens inside „Model“ (marked green), which I haven’t explored yet. Same for the tweeter.

And most important I see there on the right is phase.

You have all the critical things - anything else is tweakery - Whether tweakery for the good or not will be down to your ears, your system, and very much your room.

Having tested the Exaktbox for over a week now, I think it sounds excellent and I am seriously considering it as an alternative to my SNAXO/HICAP DR.

However, there is some tweaking required to get the levels right. A sure way to drive an audiophile into madness is to give him one or more controls with continuous ranges. Currently I’m using a crossover frequency of 2700Hz and the treble level lowered by 3dB.

When I set up my active XO - indeed, when I had previously set up my speakers in passive mode in my room, finding the best positions for speakers and listening position - I used REW software, as I recommended in my first post. That is far more objective than one’s ears, while it also enables you to check and tweak phase. You can always then dial in whatever boost or cut you find subjectively pleasing, but starting from the best basis.

OK, now I understand for what you have used REW. I was a bit confused because I needed REW for something different.

The demo of the Exaktbox ends tomorrow and I won’t have time to set REW up properly. Should I decide to switch to an Exaktbox, I’ll have more time and will give REW a try.

Aleae iactae sunt, SNAXO and HICAP DR have now been replaced by an Akurate Exaktbox Katalyst.

The Exaktbox sounds excellent, even if the settings may not be optimal yet. Soundstage is wider, the bass has much more stability, everything is clearer. It seems to help that the analogue path is as short as possible and the DACs can directly drive the individual power amp channels.

To achieve the same level of performance with the SNAXO, I would have had to upgrade my existing DSM to Katalyst level and also to replace my HICAP with a SuperCAP. This would have cost more than a new Exaktbox. I was able to get a s/h Exaktbox and with trading in of my SNAXO and HICAP the switch to the Exaktbox cost about the half of that.

And the Exaktbox is kind of future-proof: Should the SL2s ever break beyond repair, there are now quite a number of speakers available that are compatible with Exakt, i.e. there exists an Exakt filter with phase correction. All that would be needed is a software reconfiguration of the Exaktbox. And even if the speaker is not fully Exakt compatible, a crossover filter can be easily created, provided the passive crossover can be by-passed.