On my 552 I have run out of ports for my analogues tape/reel decks. I was wandering if any of you in the group have added a quality port switch to connect the extra kits on a single amp in/out port.

I’m familiar with just such a thing - and to think some would like a version of the 552 with only one or two inputs!

There are a number of secondhand options out there from the heyday of tape, although one of the best is also one of the cheapest and easiest to find - the QED. They come in either 2 or 3 way form, with either DIN or RCA Phono connectors. 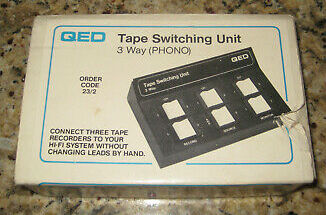 Wow, I remember them! Been years since I saw one though. that was the height of complexity back then. No wi-fi vs Ethernet, routers, cisco etc etc. Simpler days.

Thank you, in the mean I also found a Sony SB500 and an Akai DS5. so plenty of choices.

The Sony and Akai look great outside but don’t inspire as much confidence inside. The QEDs don’t look like much but QED knew their stuff and the cabling and soldering quality was always very good for the time. QED equipment was always internally built way better than its modest price would suggest - just take a look at the old A240 amp - sheer quality for beer money.

I’ve still got their Passive Pre Amp (CD control unit). IIRC, this was when higher-output CDPs came on the market and the CDP signal could be fed straight in to the power amp and/or the pre didn’t have adequate inputs for a CDP.

Damn…could have saved thousands on the 552

Richard, you are right there, as I still have an old brand new QED for speakers sharing. Although the looks is what it is the inside is “solid”.

Actually it is a nice idea using passive preamps to make these connections.

Maybe a bit oblique to the question as originally posed, but nevertherless people reading the thread might find of interest:

Some years ago (alright maybe 30!) when I was dabbling with recording and creating sounds, and at the time having a pair of reel-to-reel tape recorders (Sony TC377) amongst other things, I made my own switch box.

The box connected to the tape record and monitor sockets of my preamp, and also to the Aux input (the preamp only had Phono, CD and Aux inputs). Pushbutton switches allowed selection of any of the connected sources (choosing from 2 tape decks, cassette, VCR, Tuner, TV and a spare) to the Aux preamp input, and independently any of the recording machines to the tape out and tape monitor sockets of the preamp.

It also included a matrix board with insertable pins that could connect any of the box’s input sockets to any output socket - intended for easy setup of odd connections, e.g. for bouncing left to right channels. 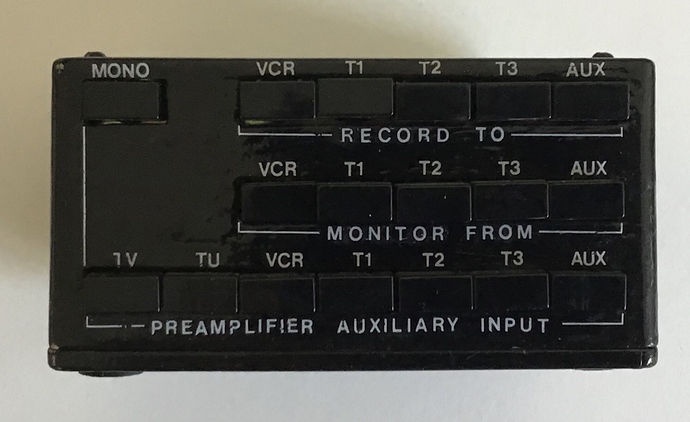 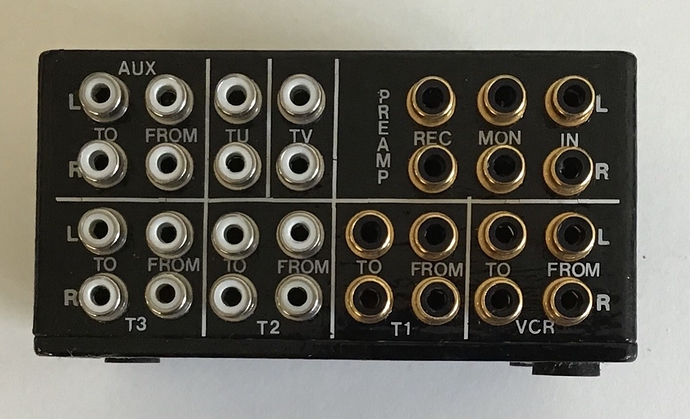 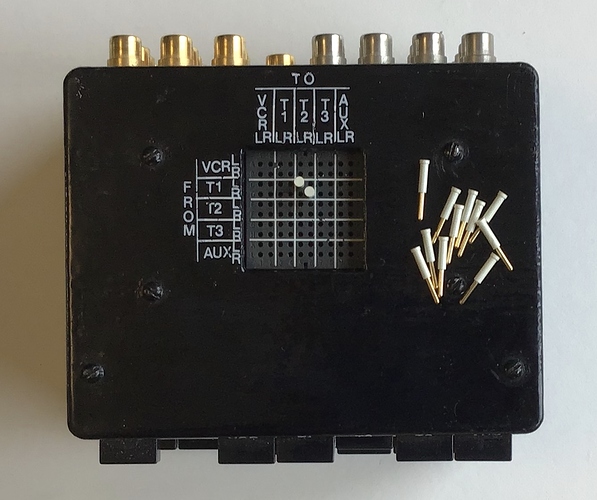 This is great. You must have been taken by the recording bug at the time like all of us of the period.
thanks
salvo

Yes, and I used to have fun making tape loops etc. Also tried doing sampling, though not much, but a favourite I recall splicing as a tape loop was a drum/bass sample from a Van der Graaff Generator track.

These days with digital these things are so much easier, and without losing quality on bouncing (though the successive treble cut of a fading bounce could sound good).

The idea for the matrix board came from some time previously messing around with a VCS3 synthesiser - the matrix so much better than Moog’s telephone exchange style cable patching. I kept the box simply because I never know if one day I may want to have more connection options than an amp may have - and maybe also because things like that are both unique and full of loving care!

I bought a three way passive rca switcher from Amazon a few years ago , it’s metal construction, solid has a decent rotary switch to select the output / input and well built inside and out. I use it with my Atom as it only has one analogue in and I have two analogue devices. Cant hear any difference with it in our out which is a good thing.