I’m listening to this for the first time, and only 4 tracks in, I can definitely recommend it. One of my favourite ‘90s albums, sounding to me better than ever.

Their best album, courtesy of Eno/Lanois

Track 14. Perfecto Mix of Even Better than The Real Thing

Fantastic period work from Lanois around that time, in addition to Achtung Baby. Bob Dylan’s Oh Mercy and Hothouse Flowers’ songs from the rain are both terrific albums produced by Lanois as well.

Agreed, and don’t forget Emmylou’s Wrecking Ball and Robbie Robertsons albums. I had the pleasure of meeting both himself and Eno when they were in Dublin working with U2 on Achtung, both very unassuming nice guys. I’m a big fan of their individual solo work too particularly Acadie from DL.

Fantastic album. Acrobat is one of my all time favourite U2 tracks.

U2 fanboy whilst growing up that’s been tested to the limits from what they released in the last 20 years. That new track is a new low.

Achtung Baby was a shock especially with The Fly as a lead single and the lyrics are about bitterness of a break up on the first side.
‘Love is a temple, love is a higher law.
You ask me to enter then you make crawl.’
The opening of each song sounds like it should be a start to another song.

They would front-load their live shows with the albums songs and the reaction was muted compared to the older tracks in the second half of the show.
Took my soon to be wife on our first weekend away together to see them at Madison Square Garden’s. Good memories.

Not played the album for years. Somewhat afraid that it might not be as good as I thought it was.

Lanois produced The Neville Brothers Yellow Moon from 89. Which is definitely worth checking out if u have not heard it.

Has that Lanois production signature.

I was never a fan of U2. For me that changed when Achtung Baby was released but it’s still the only album of theirs I like.

I played this yesterday when I saw it on Qobuz. The kids walked out and wouldn’t listen to it. To them U2 are a joke but I suppose in their lifetime the band haven’t released anything of any relevance.

My biggest achievement was convincing my friend who hated them to change his mind on that album.

I’ve just got the big bumper 50+ Remastered track reissue - to complete so far the series.
The album was a funny one for me, what with being caught up in that whole late 80s early 90s going out raving thing. Seemed artificial the connection between the dots at the time.

The band members are 13 years - a generation older than me and I kind of looked at them as a role model.
This album really didn’t connect with me at the time. Much preferring the little later Zooropa.

Bono looks awfully old these days. He was such a handsome young charismatic chap.

Not played the album for years. Somewhat afraid that it might not be as good as I thought it was.

It actually stands the test of time very well. Truly a classic.

I remember it being a great album. They did three studio albums where they were significantly different (for a fairly mainstream band) with each one:

It’s good point about Lanois and Eno as well. I was starting to broaden my taste at the time from my limited student tastes and getting stuff that Lanois had produced helped.

Robbie Robertson and The Nevilles as others have said. Also Peter Gabriel

My favourite mid century U2 tracks were the ones done with some studio influence by Flood - Mark Ellis - who brought out and influenced their best post punkness.

My favourite mid century U2 tracks

I liked the more atmospheric stuff on Unforgettable Fire like Bad and Indian Summer Sky.

That is a good one.

Actually I was replying from memory. Having checked, the one I was thinking of is Elvis Presley and America.

Not a U2 fan, but absolutely agree on Emmylou and Robbie - wonderful production on both. Lanois’ solo album is pretty good too, I remember metaphorically dancing along to The Maker.

Looking forward to listening to this. I was not a fan prior, but Achtung Baby was ‘different’ and I liked it a lot. Still do.

I saw the Zoo TV tour in Washington DC and thought it was really well done. Saw Zooropa too. Glad to have seen the band, as Bono is a very good “front man.”

Saw Daniel Lanois a couple of years ago at Ramsgate Music Hall - a venue the size of your bathroom. He had to ask Brian Eno where Ramsgate was in the UK. 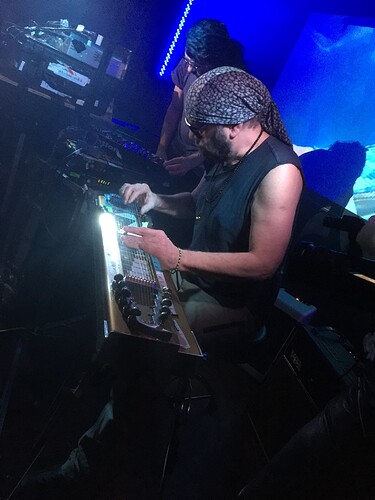