Any kind roving reporter types in attendance, be nice to get some pictures, thoughts, maybe videos. 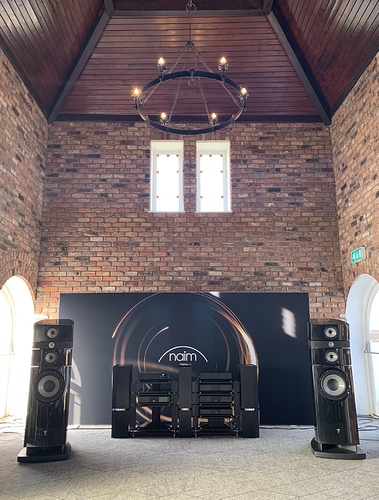 Love the Statement split to surround the Fraims, but beastly amps near non powered bits

Yes, the guys at Signals with assistance from Naim moved all the other amps etc into another room away from the Statement amps…sounded much better apparently.

Just got back home from the annual bash, and, as always, a delightfully relaxed show.

Met Richard Dane for the first time, and had a chat about this and that, compliments from myself about his moderation of this 'ere forum, which isn’t the easiest of tasks, at times. He managed to resist selling me a Bentley Bentayga, which, as you know, comes with a Naim Audio system chucked in for free.

Had a listen to the big Naim setup, which confirmed that I just don’t get on with Focal speakers, and anyway, it is firmly in Bentley territory for me.

Otherwise, had a bimble round, but couldn’t escape the feeling that I just really wanted to get back in the car for the two hour drive back to York to listen to some of my own music … which is just as it should be, after all.

Its strange i don,t mind the Focal Kanta,s but the big Utopia,s, just don,t sound right with Naim, at least.

Good show as per normal. I thought the Kudos room was excellent again. The had 808s powered by 3x300, 552 and 555. Included a new Naim Snaxo specially for Kudos.

I bet that sounded absolutely amazing…

It certainly did. To be honest I thought it was better sounding than the Naim Statement kit.

It certainly did. To be honest I thought it was better sounding than the Naim Statement kit.

Was the Statement into Utopias?

The Utopias’ stand out ability is to rip your favourite music apart and throw it at you in a series of disconnected sounds. Dreadful, dreadful speakers. It’s no surprise that Naim demos are always so disappointing. It’s like Mo Farah running a race in waders. Come on Naim. Choose music, not hifi pyrotechnics.

When we heard them last year at Salisbury a thought came to mind that they might have a defect. I wonder if they are the same ones being moved around for shows ??

They were used at Signals before our bash at Salisbury…not liked at Signals. Jason at Naim knows his stuff, they are not faulty, but i guess his hands are tied. They are not doing Naim any favours, hopefully the Kanta,s are setting a new direction?

Was the Statement into Utopias?

Karen andileft the Naim room hugely disappointed. We left feeling we had just been subjected to an audio assault on the senses. The Focals have gone too far, the tweeter could rip the paint of anything and as for the bass line, way too much and out of control. How anyone could consider this to be enjoyable is beyond me.

A nice time pottering through the rooms. My main objective was to get a few ideas for relatively compact speakers that SWMBO might not object over much to and would work happily with the 250DR arriving next Wednesday to replace the current 200DR that powers my 272/XPS DR system.

Would love the Brigadier mu2 but at £10k they remain aspirational. Lovely sound and certainly one of the more enjoyable demos.

In terms of box ticking, Spendor A7 might just make it, though not sure if floor mounted speakers will get over SWMBO threshold. Negotiated for the demo set to be transferred from Chester to my place with the new amp, so will try them out both for positioning and sound.

But what does one do knowing what one knows…

Wow I was hoping finally to here some glowing Statements

I have smaller Focals and also found at demos the Kanta 2 are a superb match, but as others have said as it gets bigger someone is so wrong, I even said at a road show the whole soundstage is lop sided.

Wouldn’t it be awesome thought to hear the Statement hooked up to DBLs.

When I too heard the big Focal’s at the Bristol Show earlier this year; I also think the same as the many comments above, i could not put my finger on it but something was just not quite right in their presentation. I seem to recall most folks (including myself) walking out feeling bemused after the demo…what’s going on?

This seems to be a discussion that comes around annually after every show. I couldn’t make the Acoustica show this year, but it seems like it’s a repeat of the last few in that the Naim/Focal demos just don’t work, and you are left with rooms from other speaker manufacturers, especially Dynaudio and Kudos, sounding really good on the end of Naim systems.

It’s a problem. At these demos the hideous Utopias just dominate everything (visually as well as audibly). Those who know Naim well and understand why they are forced to demo their superb electronics with these things can reconcile it. However those who are relatively new to the brand but can appreciate decent music reproduction (i.e. exactly the demographic that Naim is trying to attract at these shows) very often walk away bemused and disappointed wondering whether the electronics are to blame.

To have folk listen to the Statement and ND555 and walk away with that impression is such a shame.