Airplay all sound to Uniti from Mac?

Thinking of upgrading my development laptop. Perhaps finally go to Macbook Pro. But I have a few questions first which I hope someone here can answer.

I want to be able to stream ALL computer sounds to my Atom HE while using and internal or external microphone in video calls.

Initially I was under the impression that all Macs came with a hi res sound via TOSLINK through a modified port in the headphone socket but to my chagrin I just realized this was only available on older models.

So my next question is if I can stream ALL the computer sound via Airplay? Online it seems to be possible but it would be better if someone who does it can confirm. I know you can airplay music but I would want to get OS sounds, browser sound, etc.

Yes, that’s been working for longer than AirPlay 2 exists.

I think there’s a few limitations (e.g. only 1 destination, I think I read about stereo setups with HomePods, …).
Haven’t used it in a while, can test with my Nova after work…

Thank you! That would be great!

In short: answer seems to be “no, not fully” these days.
Which actually means, I have to revisit my decision from some years ago, to have no cable any more from my Mac to my stereo (connected to an AirPort Express) sitting under the same desk. Usually used it only for iTunes (=Music), but with the option to switch to “full system sound”.
(Was a totally different setup, without a Nova in another room and before I got a 27" screen with rather decent speakers in it; seems I haven’t tried to use it for some time now…)

Tried with Nova and AirPort Express, both with AirPlay 2.
I also fired up my old AirPlay 1 Pioneer speaker, which these days works the same as above.

(Sorry if any names are off; translated back from German; did not check the official names.)

(Something in me wants to find out, when it changed, why they went for a more “media” optimized way, if it is related to AirPlay 2 introduction, … but haven’t found this yet and maybe should spend time now differently. These things annoy me… I liked the old feature better. The new one could be more robust on bad WiFi or so… but with good network, even AirPlay 1 was doing really fine.)

Thanks for the very detailed reply. I really appreciate it!

As you describe it, it is pretty much useless for my intended use so you saved me lots of possible frustration.

I am mostly annoyed by the apparent removal of the TOSLINK interface.

So it is probably back to an external converter then. Which I already have on Windows. Suppose I could use the same external box on a Mac but, considering the premium cost of Apple silicon, a direct interface to the Naim would have been a serious selling point for me.

I know there’s 3rd party software for “routing audio” on Macs, but I haven’t yet looked, if those could help here or not.

As Apple gives so they take… starting next release, macOS will be able to receive (!) AirPlay 2, so you can use it as an external speaker or even screen-share your iPhone or iPad to it.
(AirPlay mirror to Apple TV was for example a scenario, where near-realtime (low lag) audio+video redirection from macOS was working quite nicely, even via WiFi… maybe I should test, whether at least this is working still.)

Maybe the removal of the TOSLINK was because it needed something extra, which a very low amount of people used (and they could save money in the supply chain). Or needed less chips, so they could shrink the board and include more battery. Or it’s a step towards removing those ports anyway from (all) the devices.
Or, they knew they did not want to replicate this function on their Apple Silicon Macs, and thus removed it alltogether, before going there.

(They are known to think in advance and slowly deprecate things to get rid off. Like: support for 32 bit apps. Saved them likely work and hassle on the M1-x86-emulation to only support 64 bit. But they deprecated and removed it 2 years (+/-) before that, so people would not think it’s related to the “best ever” Macs. (That’s my theory, at least.))

I don’t think your theory is wrong and it does
make sense. Just removed something here that would have been pretty handy in my situation.

Just happy to have found this and the Airplay implementation out prior to purchase!

This does bring another Windows upgrade laptop back into the picture again.

I know there’s 3rd party software for “routing audio” on Macs, but I haven’t yet looked, if those could help here or not.

I previously tried Airfoil on my Windows laptop and it had a second or two delay and would just stutter. Is it any better on Mac?

I can’t say for their apps as I’ve never needed them. Just know they exist.

As for AirPlay from Mac to speakers, I have 2 HomePod minis in a stereo pair for computer speakers…

I just use them as smart speakers and have done with it.

Thanks for the info. It helps.

Want to avoid at all costs leaning on a specific solution and it is a total mess.

I found something like Audio Adapter with AirPlay 2 and it has an optical output.
what you think about this? 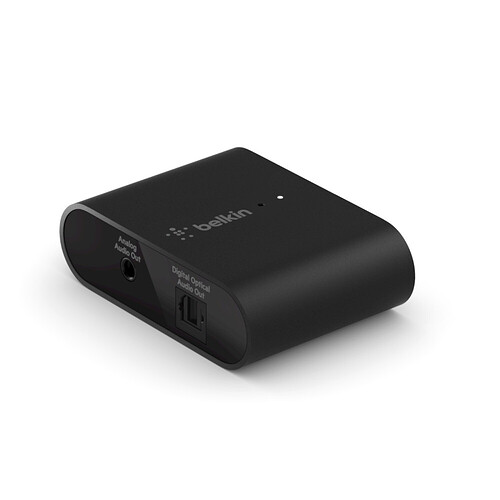 I think it is a cool device.

Thing is on my Windows machine I already have a solution to wire analog into the Atom. So considering the cost of a Macbook Pro I was looking to see if there was a solution on it that does not require an extra purchase.

I can confirm that Soundsource by Rogue Amoeba allows you to route audio on a per app basis to any connected output device. Haven’t tested it on Airplay output though.

So I was online with someone from the official Mac helpline online today. Their solution was to run an analogue cable from the line out to the Atom. So native lossless streaming is a thing of the past.