Hi, Can anyone throw any light on why my album cover art shows varying degrees of corruption…I have searched the forum and tried the different things that have been suggested when others have had album cover issues but I have drawn a total blank. I have also tried things in both IOS and Android but to no avail. I have attached an example of how they look…thankyou in advance… 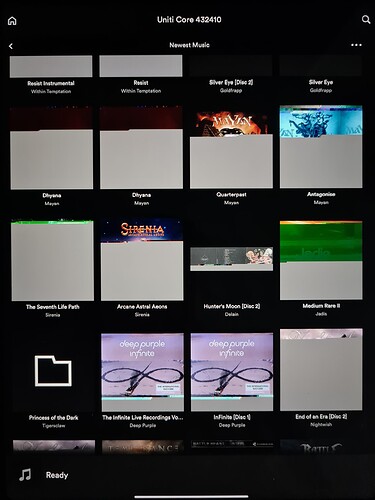 Are these rips made by your Core or downloads you have put in the downloads folder?

Were they ok previously and have become corrupted or is this a new Core and it never worked?

Where/what is your music store?

Hi, They were ripped direct from CD’s via the Core and are stored on the SSD in the Core. I would say generally the corrupted ones have never been correct but from memory there have been very rare occasions when they have been ok, then they became corrupted…what I generally find is that I have to add the artwork manually…there is artwork that I have added manually that is fine…I typically use discogs for the artwork. Also, I sometimes find that I will add artwork, press save but it does not actually save it…I have had the Core for a couple of years and it has never been 100% correct with artwork…

Hmm. Have you tried a power off restart of the Core?

I have rarely tried Discogs, but have a vague memory that it didn’t work for me. Google almost always does work for me however. There was a problem with saving artwork after editing the cover art with the Naim app a while back but I think the current release firmware fixed that (I can’t be sure as I’m on beta firmware).

I suggest do the power off restart and then try editing one of the corrupted covers with Google and see what happens.

If you are getting those grey corrupted covers from the Core on a rip as opposed to after an edit and a power off restart doesn’t fix the problem (you would need to try ripping one of those CDs again), then I would suggest a factory reset. But you really shouldn’t need to do a factory reset.

Hi Dave, Thankyou for all the suggestions…I have previously tried deleting, factory reset etc…something else that just came to my mind is that the artwork that the Core finds from somewhere for the band summary also is greyed out sometimes but in other instances it is fine…below for example… 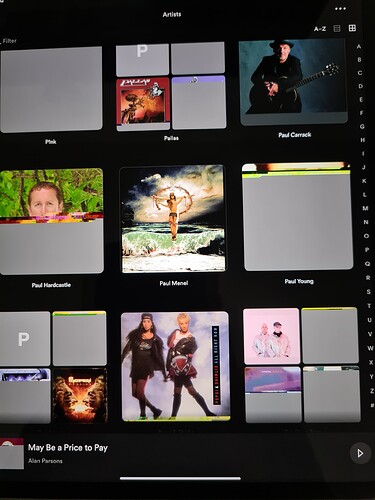 Hmm. It can’t be anything to do with the app because you have tried IOS and Android. So it’s the Core itself or it’s something coming from the lookup process. It’s almost as if the Core looks up the artwork, downloads it - but it is corrupted on download, and the Core saves the corrupted file.

Assuming that your music isn’t all from the same niche and all the artwork isn’t corrupted at source, it feels like your network or your internet connection is adding errors. But if so, I don’t know why you aren’t getting error messages. Or it’s a hardware fault with the Core.

If you re-rip a few times an album with partly-corrupted artwork, is the result exactly the same each time or sometimes it’s ok or it’s a different version of wrong?

Might be dumb but have you tried to refresh the cache.

Pete he says he tried on both IOS and Android, so it can’t be app related and the cache is in the phone not the streamer ……