Hi all. I have inherited a beautiful pair of Naim Credo Speakers from my father along with a rega 3 turntable. In time, I would like to build a Naim set up - in part in memory of my old man.

However, I’m not in a position to go spending out on a Naim set just yet, but so want to get a cheap amp to get started. Wondered if there was any advice regarding a suitable used amp (£100-200 range) to get this going, that will get something out of the speakers (and most importantly won’t damage them)?

The speakers are set up for bi-wiring, and the speaker cable comes with square conductors. 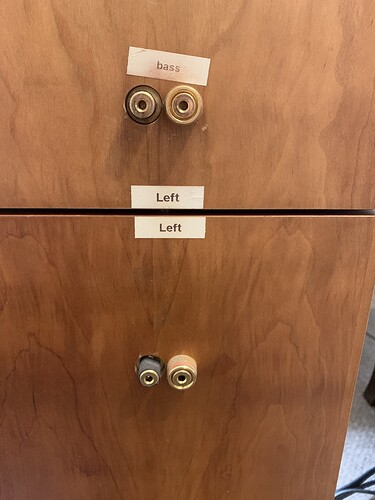 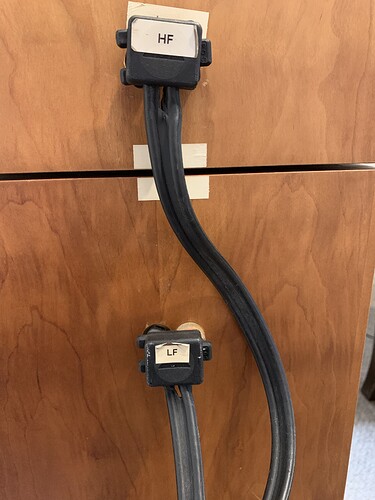 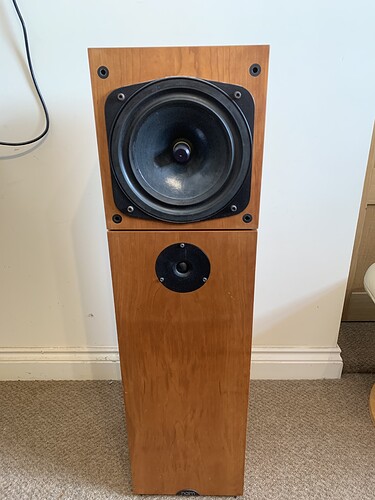 Welcome to the Forum. The Credos are nice speakers. However, they seem to have been modified as those are not the original sockets. The first question to ask is do you have the crossovers? There should be big black things that fix on the back. I believe some early models had internal crossovers, but that seems unlikely given the two pairs of sockets.

Your second picture is particularly odd, as the bass should be at the top.

Basically, without crossovers, you are set up for active, with a separate amp for bass and treble, and an electronic crossover.

Let’s have some more detail about what’s going on.

Hi, thanks for the reply.

The second picture just has the wires in wrong place.

If there was a crossover, it is no where to be seen now.

I just assumed this could be bu-wired, but you’re saying I need two amps (or a preamp and amp)?

Oh dear. As there are no crossovers - the thing that splits the bass and treble - you’d need two power amps, an electronic crossover, and a preamp. Alternatively you may be able to find some passive crossovers secondhand or get some made. Unfortunately neither is entirely straightforward.

I’m so sorry to be the bearer of bad news on this. Presumably the passive crossovers are nowhere to be found?

These are indeed great speakers, I’ve had mine 20 years and going strong. Although with your budget you will not get the best out of them, but as they are free, then keep hold of them and enjoy. Second hand value does not convey the real quality of these speakers.

Here is the specification if it helps: 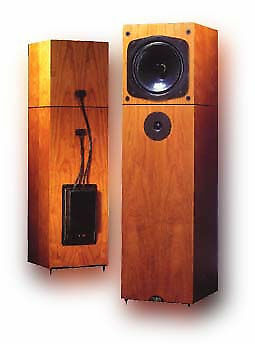 Oh dear, that does sound like a much bigger investment required on my part. A quick search of crossover boxes tells me they are quite rare. This one is available on a electronic auction site but would that work on the Credo’s? 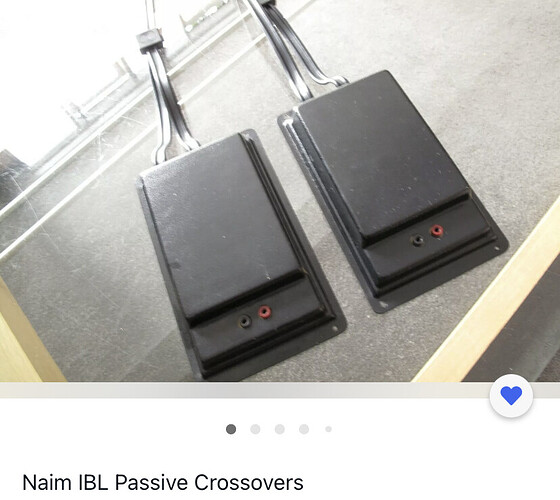 Thanks for this. Very useful. They sounded fab when connected to my dads set - though he did have a huge Naim set up back in the day

I saw those too. I just don’t know. Maybe @Richard.Dane does? The challenge here is that even with crossovers the Credos only sell for £350. Then you’d need an amplifier. I know it was your Dad’s, but you need to view all this objectively and free of emotion.

The cables were different on the Credo PXO, they weren’t NAC A5 like with IBL and SBLs. With the Credo having an inverted driver layout i suspect that the cables aren’t the only thing that’s different either - without trying to sound cruel here, i think your Credos will need a total overhaul which i’m not even sure is possible, considering the scarcity of spares…

The sockets look modified so not sure what you’ve got there. Probably worth further investigation to see whether any internal crossover has been fitted (early Intro type perhaps?).

I’ll double check on the IBL compatibility & get back to you.

Indeed the IBL is electrically the same, just the cables will need adjusting.

@Jimboh the good news is that - if there are no passive crossovers lurking inside - you could buy some IBL or SBL crossovers for £200 and get them modified by changing the lengths of the wires. You can buy the NACA5 cable for about £32 a metre. You’ll need a very good soldering iron as the A5 isn’t the easiest to solder and getting the connections right is critical. You could pay someone to do it of course. Or you could sell the speakers as a DIY project and buy an intact pair for £350.

Then we need to think about amplifiers. A Naim Nait 3 would work well and cost about £300 or £350. Cheaper would be an A&R A60, which is a nice amp. Other than that there are lots of cheap NADs and similar around. You’d need something with a moving magnet (MM) phono stage to enable you to connect your Rega.

On the bright side, the Rega with a decent cheap amp and the Credos should give you a nice system.

That’s great news that they can be rescued and working as intended.