Hi. Any ideas welcome.
Because of the quality issues affecting vinyl pressings of the 2018 Animals re mix, I bought the plain CD version. Not SACD or DVD.
Arrived from Amazon, popped it into my CD5Si, no sound, just a brief error message the the 2 x hyphens. Tried another existing disc, all fine.
I bought another, same issue. Tried both in my ancient car CD player and they play well.
Any ideas why the Naim won’t read the disc?
Thanks in advance
Mike

Many complaints on this album, be it on streaming or lp. Maybe better forget it and ask for a refund.
However it’s strange that it doesn’t play on your Cd5i.

I wonder whether it conforms to redbook standard. Naim stick tightly to redbook. Often this can just be down to the centre section of the disc being pressed too thin (to save how much money??) which can cause a read error, either due to slip or focus, on Naim CD players. Does it rip at all without any errors?

I think that perhaps our old friend Pink (by the way, which one’s he?) is having a lovely joke.

He’ll probably ask us to come in and have a cigar.

I’ve had this with a few CDs when I used the CD5si and just ended up copying the discs on to a blank CD and used that instead. This was a minor annoyance when using the CD player but since I retired the CD player and replaced it with a ND5 XS2 it is no longer a problem as the rips play just fine.

Cheers for responding. I don’t have the kit to rip, but will try on a friend’s I will stick with Tidal via i Phone and dragonfly for now. Always an excuse for a drive and play disc in the car!!

Plays fine on my CD555. Seems slightly odd that 2 copies both won’t play…

It’s playing and ripping ok on my Star. 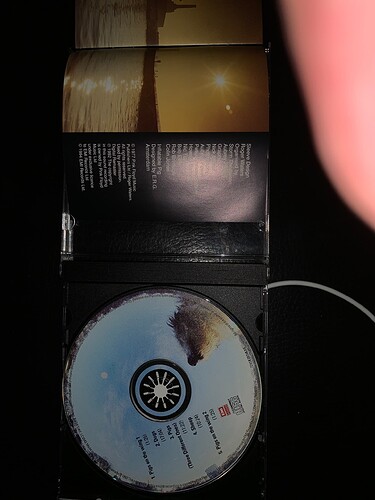 I have this release which plays flawlessly on my cds3. It still sounds pretty awful though.

Here’s the solution I’ve posted in the past for similar problems I’ve had with discs:

When this happens with my CDX2, it’s because the CD is not quite the correct thickness and the clamp assembly can’t grip it properly. Solution is pleasingly simple, though not aesthetically pleasing. Take thin strips of sticky masking tape and place around the centre hole, comme ca: [image] Facile et bon marché! Mark

Fine on both our CDX and CD3.5

Thank you, will try and let you know

Just measured the thickness, it’s 0.1 m thinner than other discs, will try the tape

I bought the Blu-Ray version, which sounds pretty decent on my Oppo, and also the cd. The cd plays fine on my CD5 XS.

I’m having issues with this CD too, and ended up playing it using a Sony universal BluRay player I have connected to my system as my CD player wouldn’t read the disc. Contemplating requesting a new copy from Amazon, however I fear this will have the exact same issue…