Anyone use the Uniti Atom with Dynaudio? Building my first system

In the process of choosing components for my first system build. Judging from reviews the sound characteristics of the Dynaudio Evokes would compliment Uniti Atom nicely. However The Evokes seem to be more on the demanding side of average to drive so I’m not sure if the Atoms would be up to the task. Also wanted to note that the similar Spec’ed Sonus Faber Lumina 2’s have been reviewed very favorably with the Atom. The Lumina is a 4 ohm speaker and the Evoke is 6 ohm.

I take these sort of reviews with a grain of salt but just thought it was worth pointing out. Would much rather hear from Naim owners who have used Dynaudio speakers in their systems.

Welcome. I used a SuperNait 2 with HiCap DR to drive Dynaudio Special 40’s I wasn’t all that thrilled and moved on. Just didn’t have the grunt at least in my opinion. Also fwiw, your avatar is really nasty. JMO

I have an Atom in my home office, and use it with an old pair of Dynaudio Audience 52 SE. The speakers are mounted on the wall above my head and angled down in sort of a near-field arrangement. It sounds fine, but I’m not really doing any serious listening and don’t play it loudly at all.

ATM, my 252 preamp is out for service, so I have moved the Atom to my listening room and connected it to my Dynaudio Confidence C2 speakers. I don’t recommend that … LOL. The Confidence need lots of current to shine (thus the 300DR in my system).

Given that, the Atom may or may not work well with other Dynaudio speakers. In general they like a lot of current to shine, and the farther you go up the line the bigger amp you should have to drive them.

I’m not familiar with the Evokes, but I would definitely audition a pair with the Atom before committing to them. They are not terribly efficient and may on average make more power demands than other speakers in similar range. My gut says the Atom may not be up to the task for making them shine.

One other thing. I once had a UnitiQute (same power rating as Atom) and used a pair of Dynaudio Contour S1.4 with it. They sounded somewhat anemic and lethargic, so I pretty quickly bought a 250-2 amp for it. That started me down the road of upgrades to what I have now, 10 years later.

@afgverhart uses dynaudio with Atom/HE. He’s the man to ask.

I’m starting to think that moving up to the Nova might be a more appropriate choice. I read a few reports of folks having the same experience with the Evoke 30’s that you had with your Contours. I Was hoping I would be able to skate by with the slightly less demanding Evoke 20’s, but that might not be the case. Surprisingly enough, there have been quite a few reports of the 50 Watt Audiolab’s 6000A playing really nicely with the Evoke 20s. Once you upgraded to the 250-2 Power amp, were you happy with the pairing?

I run Evoke 50 with original Nait XS. Amp is probably next on my list but I am on no rush I think it sounds fantastic. Not sure I’d want any less power though. Having said that I haven’t heard them on anything else so don’t know what I’m missing either

evoke 10 owner here but with sn3, but they are an easy load compared to dyns of old, gotta be worth a listen

@afgverhart uses dynaudio with Atom/HE. He’s the man to ask.

I have been driving my Dynaudio Contour S 3.4 LE (floorstanders) with the Atom for some time. That went really well. Adding a NAP200 and later a Purifi power amp added authority to the sound. The characteristic stayed pretty much in place, due to the ATOM preamp I guess. So give it a try and you can always add a power amp later.

Notice most Dynaudio’s need some distance to rear wall, and they usually need some power to run them properly.

If going after Atom, the new Rega Kyte are very easy driven, perhaps give these a demo.

Otherwise a Nova will have the power to most speakers out there, if looking for very compact boxes, something like Ophidian and Neat Iota might be interesting too.

Once you upgraded to the 250-2 Power amp, were you happy with the pairing?

Yes, in terms of driving the Contour S1.4; however, I listen to a lot of large scale orchestral music (Mahler, etc), and ultimately abandoned stand mount speakers for more full range floor standers. Also, after I added he 250 I got a 202, and that started me on the path to where I am now. Once I had a 202, I traded the UnitiQute for a ND5XS streamer. A couple years ago I upgraded that to a NDX2.

My UnitiQute2, the immediate predecessor to the Atom, is paired here at home with Dynaudio Excite X12s. I like them a lot.

Planning on doing some auditions next month. I’m getting the general impression that the Atom would definitely be straining a bit with the Evoke '20s! The Nova is definitely stretching my budget a bit, but it’s certainly doable if I really love the evoke20/nova pairing. At least with the Nova, I wouldn’t be as limited with other speaker options down the road compared to the Atom. Another speaker I’m planning on auditioning is the Sonus Faber Lumina 2. According to write-ups, this speaker definitely has a much livelier in-your-face sound than other Sonus Faber offerings and pairs really well with the Atom. It might be another nice option if I plan to stick with the Atom and keep the budget in check.

That’s great to hear! I don’t know much UnitiQut. I’ll have to check out the specs later. If it’s the Atoms predecessor, I’m assuming the power capabilities are relatively similar? The fact you are running the Excite 12’s on them gives me some hope that I would have a fighting chance with the Atom/Evoke combo. Have you encountered any limitations or snags with running this combination? Clipping? For the most part, I listen at a reasonable volume but definitely like the option to go loud sometimes.

Atom and UnitiQute are both rated 40WPC @ 8ohm

Good deal. Looks like I’ll be testing the evokes with both the Atom and Nova then. Maybe not but I’d still like to explore the possibility. I certainly don’t want the capability of the speakers to be restrained.

I have the Nova and Evoke 50 and am very happy with this arrangement.

If you have the option of Atom or Nova, I would just buy the Nova. A ‘no brainer’ for me.

The Atom power amp has a bit more clout than the Unitiqute at 40W instead of 30, but if you really want to drive more demanding speakers the Nova is a lot more capable (as was its predecessor, the Superuniti) so perhaps worth stretching your budget to get a system that really works for you.

Again, I would not rule out the Atom too quickly. Give it a try as you might be surprised. In our case the Atom was more than capable to fill a large living with sound (even at high volume) driving a pair of Dynaudio speakers. 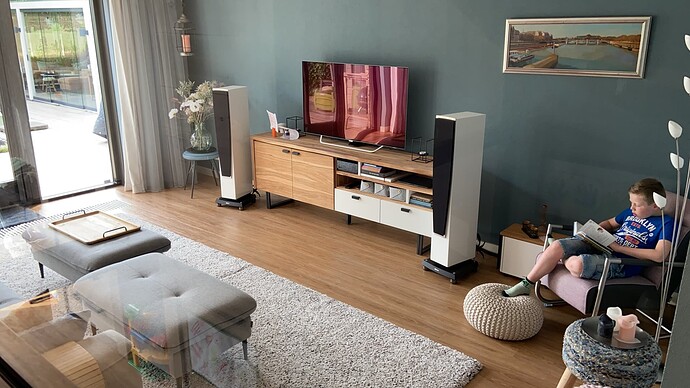