Yes, competition is good. But are Apple, Spotify, and Amazon truly fair competition for any smaller players? But I guess we all vote with our $ where we stand. If Walmart announces a hi-res streaming service for less $ than the others, would you jump on that as well? More and more, ‘loyalty’ is going to be a deciding factor in how we spend our money, one reason we are discussing this on a Naim forum, not a Sonos forum (they both fill a room with sound). If one has a five or six figure hifi, what’s a few extra dollars a month to keep a smaller company in service (that actually gives more to the artists) vs giving it to a behemoth corporation in the name of convenience? (FTR I do use Apple computers).

Over on the Roon forum there’s some with a heavy streak of schadenfruede - despite being Roon subscribers (lifer myself) they almost seem giddy that Apple and Spotify will take Qobuz and Tidal down along with Roon. But if everybody currently invested in them does the right thing and stays the course, those three won’t be going anywhere.

They added exclusive mode to the window app but it doesn’t work as it should at all. It’s the biggest Joke really and shows they don’t give a hoots about hifi nor do Apple as it’s not really selling their hardware which Apple Music is there for really.

Be interesting to know how much they make from licensing Airplay to device manufacturers.

You do have a point about Walmart. I have personally never shopped there and would not subscribe if they came out with something. I’m already an Amazon prime member, so their music service sparked interest but interface is terrible and even their hires has mixed albums. It’s like they just cobbled together tracks and didn’t take from same master.

Not sure what means to be loyal to Tidal, they’re mostly owned by Jack Dorsey now. At least Qobuz seems to be catering to audiophiles and that’s worth something. Is it enough to overlook the holes in their library, I don’t know. This seems like something they could fix since it’s not like they have to buy the catalog, it’s just contracts with the labels.

And as far as roon, I’m already a lifer, so if I leave for another service, it’s no loss to them. I would hope the competition would get them to finally come out with their mobile solution they talked about years ago. And right now, they’re one of the few that make it easy to stream hires throughout the house. I’m getting dropouts with Qobuz and Chromecast on new Uniti HE.

IMO this whole race to hi-res is mostly marketing fluff. Bigger numbers equals better! When in fact most people streaming to their phones, Sonos, etc won’t know/hear the difference (or even care).

It’s like the megapixel race in digital camera sensors. For some users it’s really important, but for many its mostly just bragging rights and the insatiable need for the next greatest thing. Pictures of your cat on Instagram won’t be any more interesting via a full frame 45mp sensor than they will with a 12mp iPhone. Now if one wants to make a large wall size print that’s where the difference will begin, but most people, even with high end, hires cameras, couldn’t be bothered to print 4X6 inches let alone 4X6 feet!

But isn’t it nice that all services will be offering lossless? We took a sound quality hit when we went from cds to downloads and streaming. Only in last few years Tidal and Qobuz finally changed that. With the current infrastructure and hardware, no reason to keep using lossy tracks. Streaming is mainstream and not everyone listens on their mobile device. And maybe people being stuck at home for the past year made people realize better sound is important on home equipment. Heard audio vendors have actually done very well over the past year.

I was actually gifted a comp ‘lifetime’ sub to Tidal last year and dropped my Qobuz sub. After six months of MQA nonsense I’m now back to a paid Qobuz sub and have signed out from Tidal on my Roon server. I find very few title holes between them, and if I do, and it is something I couldn’t live without, then I just buy it for download (I did this when going from Qobuz to Tidal last year). So yeah, even though I could save myself $150/year with my free Tidal sub, I voted with my wallet. Plus, I feel like I owe the artists at least something - they’re the ones who sadly get left out of this argument over streaming services.

And I’m jealous of your new HE!

I started out with Tidal and then switched to Qobuz when they first came to the US. Qobuz was pretty bad at that point, so went to back Tidal. After about 6 months I gave Qobuz another chance and stayed with them. I did try to give Tidal another time and just didn’t like that MQA was the only option on so many albums. And then when I was aac for some albums, I had enough. Back to Qobuz. It’s only since I’ve been playing with Spotify that I’m seeing more holes in Qobuz.

Just testing Spotify to see if I could live with it once lossless is out and stop using Qobuz. Haven’t made my mind up yet since lossless not here yet. And then Apple made their announcement and figured the same. Doesn’t hurt to give fair evaluation. And if anything, may give me suggestions for roon. They at least read everyone suggestions, whether they do anything about it is another story.

Yes, I think it’s good that they are offering up music as it should be heard. My point is that us audiophiles should think long and hard before jumping ship from the likes of Qobuz, and take into consideration the whole music streaming/audiophile industry ecosystem and how the downfall of smaller alternatives could affect it.

I think the only thing Roon could do with Apple or Spotify is figure out how they can do a pass through of the services, as neither of those companies will open up API’s to being fully integrated. But then it’s no longer Roon (as one wouldn’t have the same metadata connections etc if those services stood separate from the rest of the database). It’s been said time and time again on the Roon forum that Roon would integrate them in a heartbeat, but Roon does absolutely nothing for Spotify and Apple (or Amazon) and their ultimate quest for users data, so the big boys won’t even consider bedding down with a minute player like Roon.

Yes, I get the idea of supporting the smaller players at to a point. I’m sure not giving Tidal $20 for an inferior product though. If Tidal would have have a least keep the original cd versions on there, would make more sense. At least Qobuz lowered their prices to compete and have true hires and linear notes. Not sure why no one else is offering liner notes. It’s a nice touch and still waiting for roon to actually integrate it instead of just offering a link to webpage.

Yes, and if my using Apple/Spotify/Amazon starts making my Naim sound like a Sonos I will drop them like a bad habit.

The market, fuelled by individuals, will decide.

I am not going to avoid the big players out of some self aggrandising sense of altruism, but by whether their service meets my needs or not.

Fair enough, you be you, but as small business owner myself, all I ask is that you would consider what I’m on about.

Well sound quality is important and that will be part of my evaluation. I found Tidal sound quality inferior to Qobuz, even though Tidal had the better library. So even though Spotify and Apple have better libraries, if sound quality takes a hit, I won’t keep them. I can’t really judge their interface yet since haven’t really used Apple Music and only have done daily playlists with Spotify. I did find Spotify had hidden advanced search features. You can search for record label, certain range of years, genre, and any combination of these. Does things even roon can’t do with the streaming services until you’ve already added to your library. They also both offer scrolling lyrics on the iPhone. Roon has a somewhat crippled iPhone app compared to the iPad version.

I do, in every decision I make… if you have a great product, I will happily open my wallet to you.

By the way, in re-reading my comment I was not pointing at any individuals and I did not mean to cause any offence l, but I fear there is a general level of self delusion on many forums made by folks wanting to protect smaller businesses without much regard for whether they are offering value or not.

Qobuz and Roon work great together and, at present, are an ideal combo for my Naim system. But I for one am not closing doors on anyone should they offer a better proposition.

I hear you. But isn’t value all relative? Most people wouldn’t say a Naim streamer is value - why not just go with a Sonos or Bluesound at an 1/8th or more the price. I mean bits are bits aren’t they?

(personally I went with Sonore as I didn’t see the Naim streamers as value in my otherwise Naim setup, but that’s another matter).

Us audiophiles exist in a niche, and my point again is we need to protect that niche, even if it is something that isn’t perfect (few things in life are) or we could end up with nothing at all - esp in regards to Roon.

As long a people consider their purchases, and do their research (which, with my diminutive spending power is half the fun of shopping!), the niches will survive just fine.

Exactly my sentiments. I love Roon but it’s not perfect I am keeping a close eye on Innuos 2.0. I want my local and streaming to be done from one place and as seamlessly as possible so I don’t notice if it’s from my own or streaming platform. None of the streaming services on their own offer that at all. They are all disjointed and I really don’t like how they present it you. Tidal these days is the best UI but MQA is not for me. The rest are a dog’s dinner really.

My music is heavily weighted towards streaming, I have maybe 200 CDs which are ripped and within Roon, everything else is via Qobuz. I think with a collection more weighted towards local ripped music, Roon offers a stronger position and I can see if being harder to replace. 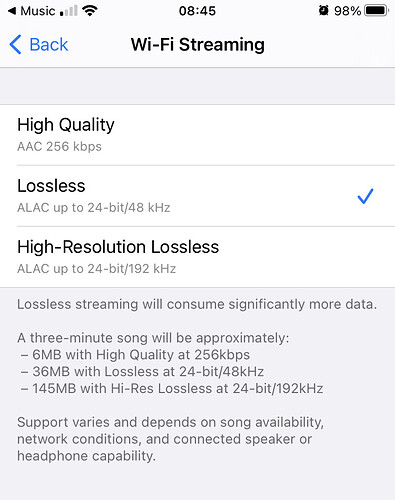