For the iPad and iPhone it’s in the settings app and the Music. Not within the actual Apple Music app. If still don’t see me it, try restarting device.

I have some albums on both my iPhone and my iPad (14.6 iOS on both) that I have ripped in AppleLossless, I thought they were automatically replayed in that format: isn’t it so?

how did AirPlay 1 behave? Do you remember?
As much as I remember (and currently checking against my non-upgraded device still on AirPlay 1 from “Music” (former iTunes) in macOS), my interface usually shows some constant 150-160 kByte/s data sent. Since it’s very close to “original 1x CD-data reading speed”, I assumed some WAV-like (or ALAC?) format is being streamed on AirPlay 1. I never measured/checked from iOS devices…
(And if so, would “downgrading” to AirPlay 1 make the transfer lossless? 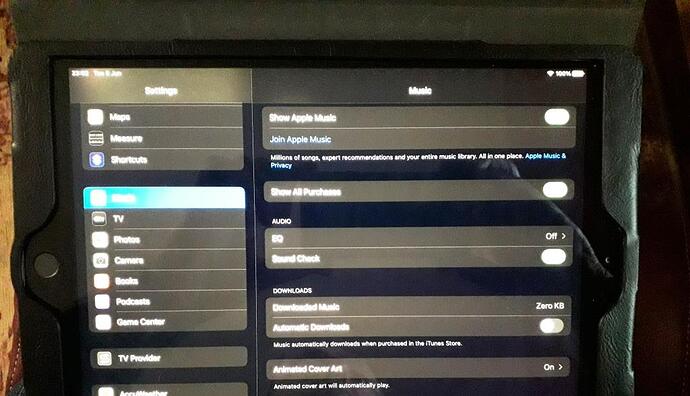 My guess it, you need an active Apple Music subscription (or trial) to see those settings.
I don’t have that (like you), and I don’t see the options either.

It was said above its not in the app- ie is a system setting. I assume then that Apple put a new system setting if you sign up to the app. If anyone has done this let us know.

Yes, I signed up for a three month trial and the options magically appeared

Lol. Understatement of the year?!

Naming is a nasty thing these days: the app „Music“ is both for playback of any locally stored music (including that shared via local devices via personal sharing) and access to the „Apple Music“ streaming service.

Obviously those new settings only apply to the service, not the app in general.

On top, the iTunes (Music) store is a separate app on iOS, but included in the macOS Music app ( formerly known as iTunes minus non-music functionality these days…)

I guess the other confusing part is this has nothing to do with the iTunes Store downloads. It only updates Apple Music subscription downloads you have for offline use. They have no plans to sell lossless music yet.

I can’t comment on Apple’s roll-out plan, but from Naim’s side if Apple feed over a lossless stream that is in the bounds of current Airplay2 capabilities then we will play it. It’s the source device that decides what it will send.

@PhilippVH - Airplay1 supported AAC, ALAC and also PCM. However, it couldn’t buffer streams on the device so was prone to dropouts and it had quite a basic synchronisation system. Airplay2 does everything Airplay1 did, but adds buffered mode, PTP synchronisation for tight lipsync on video material and multiroom in iOS, better security and so on.

Steve, thanks… yes just plugged my iPad into my DAC (DAVE) and Apple Music is playing upto 96/24 PCM via Lightning/ USB now which is progress… just not much material at present at that res.
However on the Apple Support pages, it is now saying to use HiRes from Apple Music you do need to directly attach a DAC, as opposed to use AirPlay at this time. 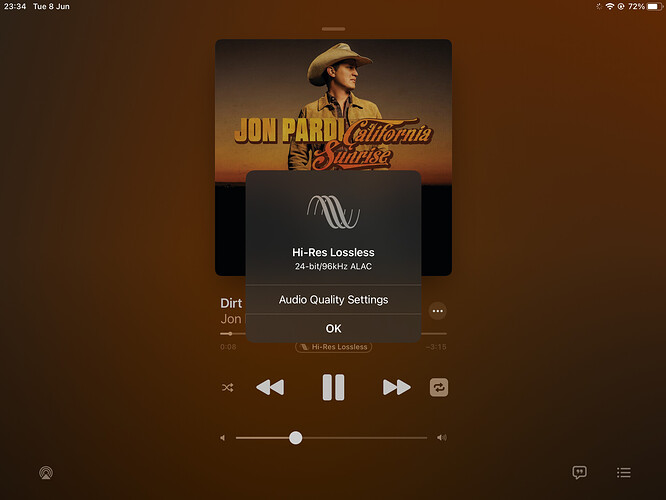 But interestingly the hires audio out is the aggregated audio channel… rather than a dedicated hires feed.

I’m surprise. The quality is good.

Simon I have an IPad Air2, and I am on 14.6, but I do not see under Settings>Music >Audio quality….so how do I Tap something that is not there?
I am referring to the link you provided, under
“How to listen to lossless on your iPhone or iPad”
“How to turn lossless on or off”
Confused, maybe I need to restart the iPad?

So, basically, Apple lossless is only lossless if physically inputed into a DAC and doesn’t play on any Apple device or through Apple Airplay.

Tidal and MQA is looking like a walk in the park.

Have you joined the service? Will only show up as a member. You get 3 months for free. But as mentioned, only aac thru AirPlay at the moment.