Are the record companies in danger of killing the golden goose?

Having just upgraded the turntable I have to say I am astonished how expensive vinyl is new! I have treated myself to some new vinyl but also bought some cd’s as for example Coldplays latest in HMV was £29.99 on vinyl and £7.99 on CD - I couldn’t justify that at all and it made me glad that I bought a sizeable vinyl collection when they couldn’t give it away!

So is the greed of the record companies in danger of killing the golden goose that is vinyl?

Is it the record companies or the shops? I was told anecdotally by an employee that for each record sold, they would need to shift 20 cd’s to match the profit. Either way, records cost way too much and it is now the sole reason I do not have a turntable.

The real question, I guess, has to be whether the actual cost of an LP has gone up overall.

With inflation added on, those prices are equivalent to £13.50 to £20. And let’s not forget that since then VAT has increased markedly.

Oh, and looking at some of the half speed mastered LPs I bought back then. I have an Audiophile copy of Crisis? What Crisis? still in it’s plastic envelope with the original HMV price on it (£14.99). That now equates to £45.00.

We thought it was expensive, especially when we heard that in USA recorde were a lot cheaper. I understood it was a lot to do with tax or duty, accounting for something like half the cost.

It was high prices on UK side of the Atlantic that t drove illegal copying of LPs - I imagine it is only free or low cost online streaming services that may have reduced the impetus.

29p would be too much for Coldplay, never mind £29. A lot of these LPs are aimed at the wealthy middle aged who own the music already and if they are mug enough to pay it then the record companies will exploit it. That’s capitalism. We had a band play at WemsFest recently - the excellent London outfit Maroon Town - who had pressed some LPs and were selling them for £15, which seems very reasonable.

Personally I don’t have any interest of buying new albums on lps. They are 99% of time digital transfer and sound like the cd or hirez, and sometimes poorer.
Apart some audiophile albums made by Analog productions, Mobile Fidelity, or Pure Pleasure, which sound better than the digital version, the current lp production is no worth to buy. Apart the nice lp format to have the pleasure to manipulate.

Older Coldplay stuff was on offer until yesterday on Qobuz, don’t know about the latest - nearly bought a few albums for £4.49 in hi-res, then realised I’d probably get the wrong ones and wouldn’t play them much anyway. A few scathingly negative reviews for some convinced me I’d probably not enjoy them, though they do seem to have a big following.

Hopefully starting off the New Year without ‘bargain hunt’ purchases from Qobuz I’ll rarely listen to. 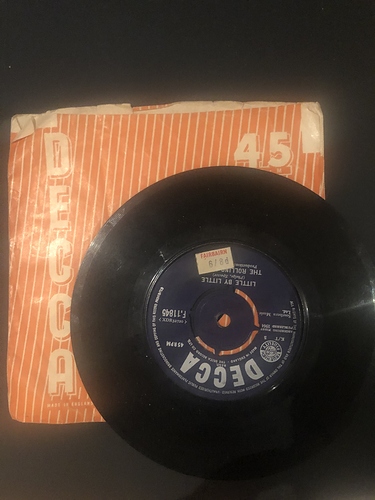 UK annual wages in 1964 …£915.20 for manual worker. My Dad would bring these home after a successful evening at the racing

Having just upgraded the turntable I have to say I am astonished how expensive vinyl is new! …

So is the greed of the record companies in danger of killing the golden goose that is vinyl?

I agree it’s very expensive but I couldn’t justify the prices for several albums at HMV a few weeks ago and put them back.

The shelves however were very full with many old/new titles which was encouraging - hopefully if they don’t shift well then prices may drop, though they could just make the record section smaller and it’s bigger than I’ve seen it in 20 years or more.

This is the issue nowadays for consumers. There are so many delivery channels - and I wouldn’t go near an HMV shop as 99% it would be a waste of time & energy for me given my tastes in music.

Best value for LPs was when Richard Branson started Virgin, initially mail order only, and then opened his first record shop above a clothing shop in London’s Oxford St. IIRC the mailorder LPs were only £1 at that time when shops were 37/5, i.e equivalent to about £16 today.

(Then Branson opened his big stores and the prices went up to standard, but the success was the range of records stocked.)

As FR noted earlier, how do you tell a digital transfer from one produced in the analog domain.
In the old days with CD there were AAD, ADD and DDD but nothing seems to exist on modern vinyl.

I agree LP pricing has become absurd. It’s the reason I gave up on vinyl, at least for now. CDs and CD players are where the bargains are.

initially mail order only, and then opened his first record shop above a clothing shop in London’s Oxford St.

Didn’t he nearly end up in the clink over that venture - selling records that where earmarked for export - some tax issue which involved his parents having to bail him out by re-mortgaging their house.

Sounds possible, but I wasn’t aware of it, as an innocent 16 year old, but I did buy from him mail order as was tge cheapest available, and I discovered the Oxford St shop when I had a summer holiday job working for a record company just round the corner, and soent many a lunchtime browsing the bootlegs!

Richard you may have the beginnings of a point re prices then v now, but that overlooks the already mentioned CD pricing. I’ve stood in HMV and asked a disinterested youth employed by them how come the Nirvana LP in my left hand costs £25 when the CD of the same music in my right hand is a fiver?

Pricing is the reason I binned my TT and associated gubbins. Just like how CDs in the early to mid 80s were an opportunity for the music biz to sell us the same music that we’d already bought but at three times the price, the exact same process is now being repeated with the additional cheek of using the very same arguments from back then - it sounds better.

And let’s not forget that since then VAT has increased markedly.

using the very same arguments from back then - it sounds better.

Is that what the record companies are claiming about vinyl?

Is that what the record companies are claiming about vinyl?

And let’s not forget that since then VAT has increased markedly.