Has anybody used the Belkin Airplay adapter with a NAC 282 or similar please? Thinking of investing in one whilst my ND5 streamer goes in to have the screen replaced as it’s gone very, very dull.

Not familiar with eth Belkin device but it only does Airplay.

I use a Yamaha MusicCast WXAD-10 in a second system an it works well and has more features which may appeal to you. It doesn’t cost too much more than the Belkin device. 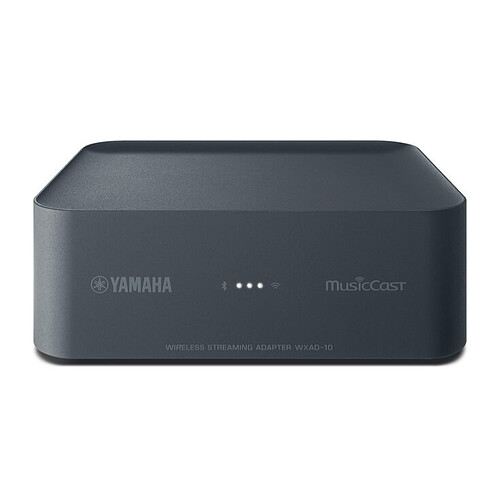 A used Apple Airport Express is worth tracking down for this purpose as well. Only the most recent one though, that looks like a white Apple TV. The firmware update Apple provided for it long after it was discontinued added support for Airplay2, it can be connected to your LAN wired or over Wi-Fi and provides a combined optical and analogue audio output in a 3.5mm jack.

Even the older Airport Express would do, the only limitation is that if you want it to do Apple multiroom you have to use OSX, not iOS. Not exactly HiFi, but for a single system it would tide you over.

Thank you peeps! I am assuming you’ve had these or have them connected directly into you 282 or 252 then. Thank you again

I’ve connected an Airport Express to a Naim preamp in the past, using a 3.5mm jack to DIN cable, and it works fine al long as you accept its sound quality limitations. Using its optical out into a separate DAC would sound better if you happen to have one.
I’ve used the Yamaha MusicCast stuff too, and it’s essentially a complete streamer at a much lower price than Naim’s, so another viable option.

Indeed so as per comments from others, enough as a stop gap and as @ChrisSU highlights, even the older Express models support Airplay v1 with the same connectivity.
I used a Chord Company 3.5mm to 5 pin DIN cable in my case and used the same direct from an iPad for a while also.

Thank you ChrisSU, that’s extremely helpful. So my HD5 XS is going back to NAIM for the screen to be replaced. I have a Muso and Muso Qb, both first gen, all using my NAIM US. The HD5 streams to my main HiFi, so if I can connect something up to NAC 282, I can still have music round the house. My Apple TV 4K works well using Apple Music, but that’s HDMI through my OPPO 105. I think I can do better for a tie over while the streamer is fixed.

Well I’ve managed to get an apple airport express, latest version and I have to say it sounds a lot better than I thought it would using AirPlay plugged into the back of the NAC282. I have also downloaded an app called flacbox and connected to my Unitiserve via DLNA and synced with all my 1600 folders, albeit took 3 days to sync and whilst it’s not as good as going through the ND5 XS, it’s perfectly acceptable for me as a backup. Plus sometimes AirPlay can get ever so slightly out of sync and again I can live with that. Thanks for all your help people that responded, it really is much appreciated. Steve.