With the current absence of live music I’ve been thinking about the band’s I saw live and compiling a mental list of my favourites based on differing criteria. One category I thought might be appropriate for a HiFi Forum is “best sounding”.
I’ve listed some of the gigs that really impressed me.

Paul Simon @ Nottingham Motorpoint Arena - the only arena gig I’ve attended where I’ve ever lauded the sound quality. There were over a dozen musicians on stage yet you could still pick out an instrument and follow it.

Eels @ Rock City, Nottingham. Saw them twice on the same your but the SQ at this gig was way better.

Joan Armatrading @ Venue Cymru, Llandudno. Saw her at this venue on different tours in successive years and the difference in sound quality between the two was a surprise.

The Cure @ Royal Court Theatre, Liverpool. The fact that it was one of my favourite bands on the day Leeds Utd won the old 1st Division title made it a memorable day for me. It was my Mum’s birthday too.

Finally, two that may be a surprise.

Public Image Ltd @ The Tivoli, Buckley. A small venue in North Wales that has hosted many of the biggest names in rock (The Who and Oasis included). The SQ was outstanding, crisp highs and chest crushing bass all beautifully balanced.
I know he’s not everyone’s cup of tea but John Lydon is mesmerising on stage.

The Damned @ The O2 Academy, Leicester. The band I’ve seen live more than any other, first in Chester in 1985 (on the Saturday before Live Aid) and most recently at Part Hall, Warrington.

I’d love to find out your faves.

In terms of sound quality at gigs, a number of artists pop up again and again:

I’ve found open air concerts seem to offer the best sound. Now that may be because there’s no audio reflections coming off walls etc. and so the bass can remain full, but clear. Hence, some of the best sounding concerts I’ve experienced are:

Of course, what we remember as good sound would most likely have been influenced by the artist and music played. Hence, what I remember as being the best indoor amplified concert would have to be Julia Fordham at the Hammersmith Odeon (on the Falling Forwards tour), where somehow everything gelled to create what felt like a small, intimate musical experience.

I seen countless bands throughout my life since 1960. Hendrix 6 times, I’ve seen Love every time that they came over.
Two that standout for me are:
Little Feat at the Rainbow Theatre 1977
Love - The Forever Changes concert at the Royal Festival Hall 2003

I have seen Pink Floyd in the mid eighties, on the place of the Versailles Castle. I was on a roof with friends. It was fantastic. 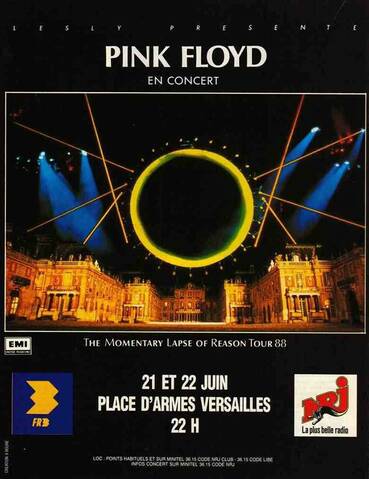 I’ve never been impressed by big gigs or open air concerts in particular, but ELO at Hammersmith and my first Bob Dylan concert same place stand out. Neither are my best, that belongs in my nostalgia file, but was Melanie (Safka) at the Rainbow when the lights went out due to a power cut. She calmly sat down on stage and just kept on playing and singing. Truly magical.

The worst funnily enough was Runrig at The Barbican ,York. It has a wall opposite the stage and just bounces the sound back at you.

I know drone metal is not everyone’s cup of tea, but Sunn O))) at Brooklyn Steel in ‘19 was spiritually (and physically) transporting.

Also, Chris Potter Quartet at the Village Vanguard in ‘14 (I think) with Eric Harland, Ethan Iverson (filling in for Craig Taborn, I think), and maybe Larry Granadier on bass. NPR was recording the early set that night, so a recording exists somewhere…

Hmm, for the most part, I was in no fit state to judge sound quality, but was certainly in a fit state to be emotionally transported to another place by the music. Most notably by the likes of John Martyn who I saw many times, and also in the smoky blues, jazz and roots clubs I have always frequented. However, I do seem to recall that the Birmingham Odeon had a good sound to it, regardless of who was playing.

Many moons ago my then girlfriend and I were going to see John Martyn at Telford’s Warehouse in Chester, a nice little venue on the canal side. Her Dad lived on a canal boat and had moored outside the venue so we went early to spend a couple of hours with him before the gig.
We knocked on the door/hatch and her Dad invited us aboard. She went first, “Hiya Dad, Hiya John” says she. I came down to see her Dad and John giving her a hug. Best of it was she had no clue John was the guy we had come to see.

Fleet Foxes at Manchester Apollo in 2017. After a couple of songs there were cries from the audience to turn it up, which they duly did, but the mix was spot on from where I was standing. Robin Pecknold’s voice was as delicious as it sounds on record, and the harmonies just wallowed around the venue beautifully.

It is easier to remember bad sound quality than good, because with good I just listen to the music and watch the performers, absorbing the atmosphere.

I do recall Pink Floyd and Roger Waters gigs having good sound, I think every time I saw them.

Otherwise one particular gig that comes to mind was PFM (Premiati, Forneria, Marconi) in London in about 1973, a university hall IIRC, which stood out at the time as having been an amazingly good sound.

Same here, gigs are to watch performers, to add something beyond the music itself. So sound is not in first place but I remember some good ones:

Shoshin was really impressing about sound without having tons of gear, Massive Attack probably not that much but best light show I have ever seen (taking the theme of move Matrix, so my judgement might be not very objective), and Melissa Etheridge was supported by musicians knowing their instruments.

I agree that gigs are to watch the performer but if the sound isn’t up to it then it takes away from the experience. I believe it affects the performers too.
I remember seeing The Damned at the O2 Academy in Liverpool three or four years ago. The sound was problematic throughout with numerous microphone changes for Dave Vanian and frequent gestures from Captain Sensible because he couldn’t hear himself. You could tell they couldn’t wait to get off the stage.

Robert Cray at the University of East Anglia in Norwich, mid 1980s. The hall only held a couple of hundred people and I stood literally within 5 yards of the stage so the old hifi adage of it sounding like someone is playing right there in your room really did happen.

Superb music played by a great guitarist and band that wasn’t ruined by a poor sound engineer so the volume levels were just right and every musician had a clear and distinct focus. A really brilliant night.

Slightly off topic but I absolutely love heading into a venue (Hammersmith Odeon as was), the shear pulse of excitement from the music that is played pre acts when the sound is slowly cranked up, identifying the music being played in this warm up, the anticipation, observing interesting characters in the crowd, the atmosphere…and knowing that my home set up could never replicate the sheer power and presence of the concert sound for good reason

I love small venues. I saw Dan Baird (ex Georgia Satellites) at The Musician in Leicester which is tiny and only houses a couple of hundred people.
DB had a guy called Joe Blanton as “special guest support”, a guy he works with on side projects. As the support set finished the band exited the stage at the front. Next thing I know Joe Blanton starts talking to me telling me how much he loves The Damned (I was wearing a Damned t-shirt).
Don’t see any of the £100 a ticket brigade doing that, or even continuing to tour as their star fades …

I once sat at a bar next to Paul Simon at a folk club ( no Art with him) and he started a conversation. He later picked up his guitar and played a couple. That was a long time ago though and I’m not sure he would recognise me now . LOL.