So after starting off with the '73 vinyl, then a migrating to the the mid 80s CD release I have just tried out the 2009 release (okay this was last night). A quid from Amazon - can’t go wrong. What a difference. A lot more bass but not in a bad way. I guess so much bass wouldn’t work on vinyl, more room to extend it on digital (CD). Different instruments come the fore and some of the electric guitar harshness that was present at certain points is tweaked down.

I must have back-to-back compared the first 5 mins half a dozen times.

And something I hadn’t been aware of before… maybe I wasn’t paying attention, I don’t know, but you know where Mr Bonzo Dog Doo-Dah does his instrument introductions, I swear the instruments start on the left and migrate to the right. So he says ‘Grand Piano’ and then the piano starts on the left and gradually drifts to the right where it fades out. Then the next highlighted instrument does the same. This seems to be for all of the solos and then the 'bells kick across the whole stage. Just me?

Thanks for reminding me, haven’t listened to for a while. Will definitely get an airing over the weekend.

This video of TB is wonderful (although not in terms of SQ).
Watched it with my wife and daughters aged 8 and 11 a year ago - the girls were fascinated by their woolly clothes…

100% agree the 2009 remaster is something better
Its a pity TB-2 hasn’t been remastered as that for me is a better album to both listen to & musicality,

Is the 2009 version you are referring to a remasters of the original or is it the completely re recorded version, with John Cleese!

Now for something slightly different… 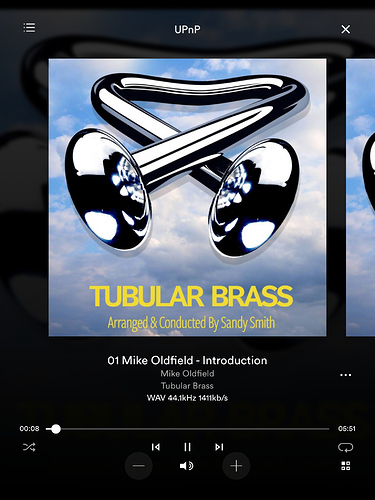 I first heard the version in Boxed and I quite enjoyed David Bedford’s orchestral arrangement when I borrowed the vinyl from the Library but I bought the original following that.
Never heard any Oldfield on CD, I stopped at Incantations, though I did see him live in Southampton (I think) around 1980.

I would like to recommend the remastered HDCD from 2000 when his back catalogue was reissued in this format.Sublime sound quality.

I once saw Fred Frith live when he was in Naked City with John Zorn.

Is the 2009 version you are referring to a remasters of the original or is it the completely re recorded version, with John Cleese!

It’s a remix of the original… No John Cleese

Watched the documentary about this LP and it turns out Branson is an absolute ****
Who’d have thought it?

Watched the documentary about this LP and it turns out Branson is an absolute ****
Who’d have thought it?

Very interesting. I watched it a couple of years ago I think. I like it when MO is running through the various tracks and what instruments he used. Interesting when one of the guys said MO used ball-peen hammers to make the 'bells really kick out!!