Have you got any other method of ripping (e.g. PC)? If so, it might be worth experimenting by ripping to the PC and then downloading to the Core and see if that will play.

It does seem very strange. It plays to the Mu-sos ok but not the NDX2. What is it in the rip that means one box can see it and the other can’t? The streamers and the mu-sos use different software. If it was a ripping error surely none of the boxes could see it.

There are some unusual unicode characters in the track names for that album. Could that cause the issue?

Those track information is in the metadata, I can’t imagine that this has any impact on the ability to play or don’t play the track.

I’m not familiar with the Core. What about the file names the rip creates?

Many thanks to those who have chipped in, much appreciated.

MrStreamer - I had exactly the same thought as you. The track titles do indeed contain some unusual characters, this is the only difference I can think of.

David H - pls could you add this info in the ndx2 beta log ? I could also drop off the offending CD if that would help? You can always delete it afterwards !!

Addendum - have just rebooted the router, Core and the NDX2, but the same issue persists.

I won’t spend any more time on the issue, it’s not the end of the world if I can’t play one Coldplay album, and the consensus of the forum seems to be that it may actually be a blessing in disguise !

Paul I see the 3.8 firmware release for NDX2 etc has just gone public. You could install that and see whether it helps (it probably won’t but then we don’t know what the issue is yet!).

By all means drop the CD over here if you are coming this way. I’m going to be away from first thing tomorrow until Midday Monday, although my wife should be here.

I wondered whether if you played the CD back on a muso and then multiroomed it to the NDX2, does it work on the NDX2 now? Maybe you already answered that question!

I have drawn the thread to the attention of the Naim people and so they should pick up anything anyone says which actually changes anything. There isn’t a beta log as such that I have access to.

Hi David
Many thanks, I may be able to drop it over next week, but will make contact beforehand.

Re: your question, yes I tried streaming the CD from the Core to the MuSo and then multi-room to the NDX2, this works fine. I’m sure this must tell the NAIM engineers quite a lot.

Can also stream the album from Tidal to the NDX2 without any issues.

Also updated NDX2 firmware to 3.8, but no change in behaviour.

Just ripped the Coldplay CD yesterday and have exactly the same issue. Will play on Qb but not on Atom etc. I think it’s prob to do with the odd track names but can’t prove one way or other. Glad I found this thread though - saves me from deleting and re-ripping for the fourth time…

Just discovered on Xmas morning that not only does the Coldplay album not play, it also causes the ndx2 to freeze. Unresponsive to both the remote control and also the NAIM app on iPhone.

Perhaps a call to Naim in the new year……when i had cd issues with my Core i sent to HQ and Flynn did some experimenting to find the problem, and kindly ripped a cdr.

Hopefully @davidhendon can report this odd behaviour via the beta test group ?

If so I’ll resist calling NAIM support - I doubt whether they could fix it, and it would just tie up valuable resources on their side, for what is a relatively minor problem encountered with only 1 CD.

Hi Paul there’s no one there to read anything or suggest anything until the NY anyway! I’ll feed it into the beta group next year, so to speak!

Many thanks David. It’s more of a curiosity as far as I’m concerned - but it may mean that there are still some vulnerabilities in the ndx2 firmware, so good that NAIM are aware.

Thanks for the report. We’ve brought the CD and will investigate the issue in the new year.

That metadata though is asking for trouble, so that is first area to check.

The CD turned up - this seems to be all based on the metadata which has multi-byte utf8 characters, which is stirring up issues in the Core. It’s pretty crazy stuff to do in metadata as asking for problems. We’ll get it investigated fully in the new year. 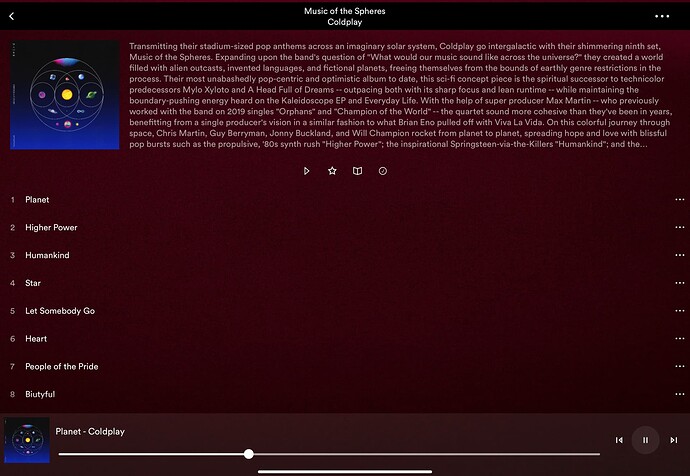