Imagine my friend’s horror seeing the van driver delivering his brand new amps drop the first box (pre amp!) the last six inches as he went to place it on his drive followed by the second box (power amp) being tossed on to the first- it actually bounced! He went to him to ask him to be careful to see that the second box was actually damaged- creased and had been at some point crushed!! Third box was placed with a bit more care on the second but the first box was on its side and the other two upside down- three bags of cement could not have been treat any worse! The fourth box stayed in the van! He photographed the damaged carton and rejected the shipment, spoke with the supplier who as so far ageedto either inspect and test the amps themselves as well as replacing any damaged cartons complete with correct stickers n serial numbers or return them to naim for checking … on the one hand this is not the fault of the supplier and the cartons are strong with foam bumpers, couriers seldom observe fragile stickers and packaging is designed to protect against rough treatment- on the other hand would anyone buy equipment having watched it being bounced to the ground? He understand his right to reject the amps outright but wondering what others would do? Is damage highly unlikely? What else should the supplier be offering to do? What would u do in his shoes?

The packaging is pretty resilient, and inside the amps etc are likely to be okay, but I wouldn’t be happy!

Here’s something I received last week. The 3 things inside were okay, but the outer box didn’t make it unfortunately. 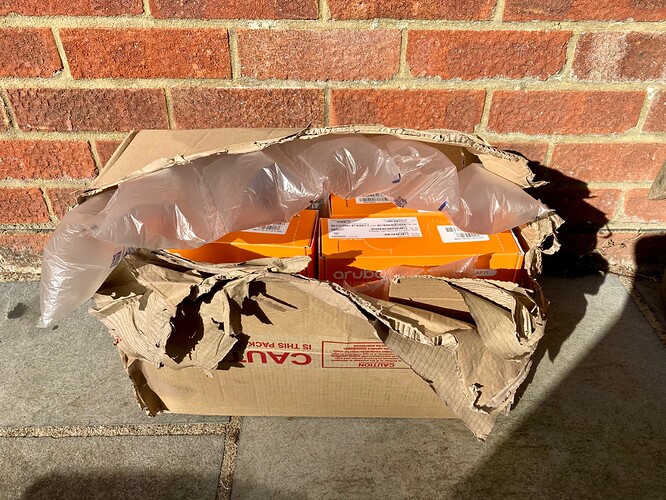 What an unpleasant experience!

I would like to think that I would have reacted the same way as your friend, though maybe I would have included quite a few expletives aimed at the delivery driver.

I think your friend has responded appropriately. While the boxes are made to protect the contents it’s always worrying to see something dropped in this way, though how often it happens and we simply don’t see it is something else again.

Most couriers are excellent and it would be most unfortunate if this thread descended to a ‘let’s slag off couriers’ thread, as has happened before. They work jolly hard for low pay, but that doesn’t of course excuse carelessness.

Most couriers are excellent and it would be most unfortunate if this thread descended to a ‘let’s slag off couriers’ thread, as has happened before. They work jolly hard for low pay, but that doesn’t of course excuse carelessness.

Most couriers are excellent and it would be most unfortunate if this thread descended to a ‘let’s slag off couriers’ thread, as has happened before.

Name and shame the bad courier to protect the good ones.

And the courier that didn’t give a toss was… DPD

While there will be some individuals who just don’t give a hoot, I suspect a lot of the delivery companies involved are flogging their workers with near unrealistic delivery schedules which will lead to corners being cut by some to ensure they’ve delivered their quota of goods for the day.

Perhaps as consumers we are partly to blame too, expecting almost everything ‘next day’ or even sooner, with expectation of free delivery most of the time, especially if we’ve spent over a certain threshold.

I don’t know what the answer is but it’s the delivery companies that are at fault, not the supplier or customer - the suppliers really need mechanisms to be able to get some form of compensation for themselves and the customer by default for the inconvenience caused to all.

It’s one individual. Our local DPD guy is excellent and provides a great service. It’s not even your equipment that was damaged. It was your friend’s, and they seem to have a very good resolution in train. What is the point of the thread, other than to whip up vitriol against couriers who work really hard for little pay?

To be honest, I have found that DPD are very good.I’ve never sent anything, but have had no problems with deliveries to me, and their app is very useful. Latterly, I took receipt of an item that they had held since 30th May *, which was actually delivered on June 9th.

Steady on, if u read the post you will see that the point was to gauge from naim enthusiasts what they would do in this situation and whether they think the items would have likely been damaged or not.

What is the point of the thread, other than to whip up vitriol against couriers who work really hard for little pay?

Really HH…. What is the point of such a provocative reply other to whip up matters yourself . The OP is fine starting such a thread.

Our local DPD guy is better than all of the other local delivery drivers for rivals with the exception of UPS. In rejecting the shipment I’d hope the sender would complain to the delivery company.

I don’t know if the OP is in a position to collect such a valuable order from the dealer in person ( what I’d do because I can) But even then you don’t know how the packages were treated enroute to them.

If your friend was worried surely they can seek views by asking the question directly. They seem to be perfectly capable of sorting it out and from the replies it seems that in general DOD couriers are very good.

As people have observed it’s not the greatest job fortunately all my recent audio has been delivered by the excellent Gareth at Audio T @ Reading.

My next most valuable come from Masters Of Malt and Somerset Cider Brandy company and they are always superbly packed - -but I always make a point of being ultra polite and smiley smiley to the drivers. On the basis they have enough poo to put up with , I shouldn’t add to their stress levels

My question was about possible damage and others’ thoughts on handling the issue not on whether my friend should or shouldn’t ask the question himself - go have a Sherry and play some calming music !!

Having had my wife watch one of my floor standers drop 4 foot from a UPS van whilst the other was placed horizontally on a gate post coping stone and started to spin before he caught it then I feel the OPs pain.

I would go further though and say that in my experience workers for UPS, DPD, Amazon, Parcelforce et al are working far beyond what us humanly possible.

I had a very mature conversation with a DPD driver who noted that she was embarrassed by the extent to which their schedule meant she had to forgo basic manners on occasion and giving each package the care to move it safely from vehicle to ground. She also noted that if such companies had any commitment to the packages rather than profit then that would involve 2 people per vehicle as some of the deliver and install companies do.

At least twice a week a white Amazon van parks alongside an unbranded van over the road from us. The Amazon driver gets as much out of his vehicle as he can and so is it into his mates van. For his mate it’s a bit on the side with a cut of his mates wages. Between the 2 of them they can just about meet the Amazon schedule.

The lovely woman who uses her estate car to deliver for DPD has it packed to the roof and clearly operating illegally most days. She delivers very locally first so the plod don’t catch her driving with zero rear mirror visibility. Each day she says she gets the equivalent of 4 car fulls of which she can only deliver 3 and only if she works to 10pm.

My most recent successful delivery was across an 8 hour window. I was drop-off 83 on the driver’s list of 84. I watched the progress off and on on the tracker, and it was counting down as the little dot moved across West Yorkshire, so it did seem that was the right number. On average the driver had just over 5 minutes to drive between stops, unload and hand over the package. It seems unsustainable.