Im also doing that Special 40’s on Stand 20. I can’t remember if the rubber pads on stand 20 are removable? 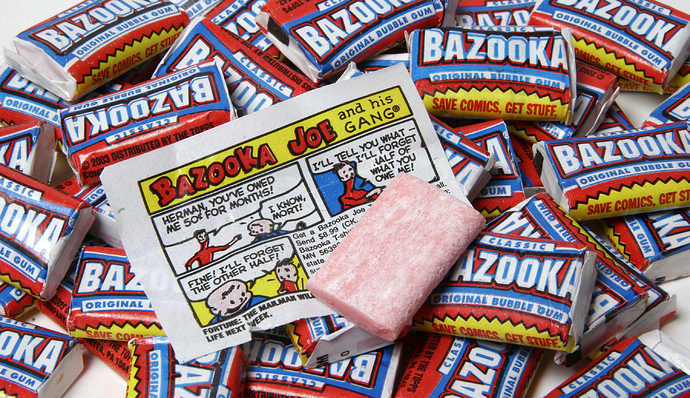 I found an hour chewed Bazooka joe was best.
If after some time you weren’t happy, you could just take it up and chew again, still tasty.

Wow that takes me back.

Now what’s next Audio grade bluetak, mark up 300% and sell in a nice package.

Hmmm, I don’t think they are easily removable … I’ll stick with them

I remember removing my first Hi-Fi speakers (Mission 731LE) from their stands and ripping large chunks of veneer off the bottoms. Not used it since.

That was my thinking also

I dimly recall from many years ago bluetak being available in black. At the time speakers in black ash were very popular and this was supposed to be less visually intrusive. Then the rumours started that it actually sounded better than the blue stuff. There’s nothing new in tweakery!

What am I bid for this… 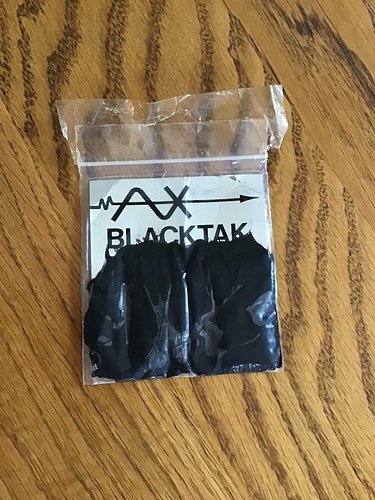 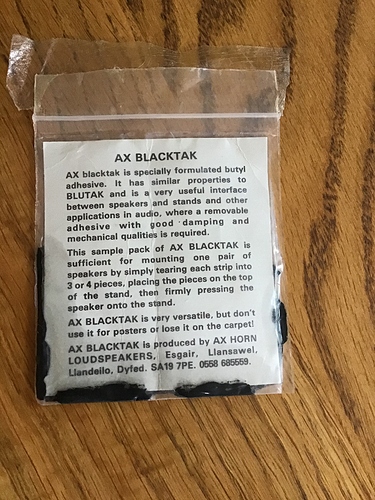 If the Stand 20 is supplied with pads fitted, then that’s the way Dynaudio intend it to be used.

The phone number suggests it is at least 25 years old!

I am also using Bluetac from my old PMC’s instead of the supplied “pads” on my Special 40’s (with Stand 6) and was just looking into this last weekend. I was not able to find any official information from Dynaudio.

It was a free sample stuck to the front of a Hifi magazine and is probably even older than you say, I found it in my electrical tool box together with a green pen to paint the edges of your CD’s for improved sound…they were the days! Interestingly a Google search shows up AX Horn Loudspeakers, they have a nice £75k pair…

If you buy a pair of Kudos Titan 505s with dedicated stands, you get a set of bolts to fix the speakers to the stands. That makes me wonder if this decoupling idea is always necessary?

I had Blu Tack under my Pro-Ac DB3s but still feared a speaker inadvertently taking a knock and ending up on the floor. Solution was a set of Herbie’s Fat Dots (discussed previously on the forum), attached with a dab of blue silicon.

Not a huge expense, very solid and IMO better SQ than Blu Tack. Plus no compression over time.

I had this argument with a friend when I saw he had tied his B&W CM1-S2s to the stands with string. He was worried about them toppling in earthquakes. A valid reason for which I always opt for floorstanders.

The funny thing was he put $100 worth of ball and cup decouplers between stand and speaker and then lashed them down with two lengths of black plastic string per speaker. The mind boggles.

The blutac is for coupling rather than decoupling.

IIRC the magazine, possibly Audiophile?, ran an article comparing the sound of Blu tac versus Black tack. Cant remember which emerged as the winner!!

There was a time when I would have compared standard BluTak with this but fortunately that has now passed! I think you may be right about "Audiophile " magazine it rings a very distant bell.

On the topic of blue tac- does anyone put it between the little metal discs that the speaker stand spikes sit in, and the floor (obviously not suitable for carpet lol)?
I did and now I don’t and didn’t make any audible difference, but limited my ability to move my speakers around.
Would welcome the forums expertise.