The latest version of Bubble UPnP includes a new audio cast feature. I haven’t tried it yet but it sounds like it could be a solution for easy hi-res streaming from Apple or Amazon music to Naim streamers if you have Bubble UPnP server in the mix. 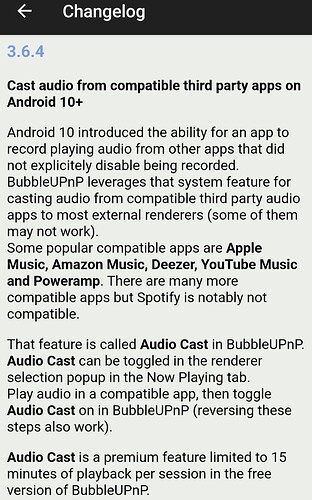 if you have Bubble UPnP server in the mix.

Definitely the app and I suspect server too otherwise you’re not going to get far with controlling Naim streamers. I haven’t tried it yet though so i don’t know how well it will work if at all with Naim streamers but if it does work it might be able to do hi-res gapless playback from Apple and Amazon music which you don’t get with Chromecast

BubbleUPnP App (on its own) will control Naim streamers (incidentally it is a good way of getting Qobuz on early generation equipment that does not support it). It was the BubbleUPnP Server part that I was unsure about. This is a different/complimentary product (often confused) and typically runs on a PC.
I could not find any reference to BubbleUPnP Server being required which if correct makes it a lot simpler.

I have Bubble server running on my NAS but that’s mostly to allow me to control my Naim streamer using Linn Kazoo on my Windows laptop and stream to my Sonos devices from the NAS. If Naim devices can be controlled from Bubble UPnP app without the server also running then server may well not be needed for the audio cast feature.

Wow that’s crazy.
I love Kazoo and sometimes use the nice Windows version (but usually Android).
Given the many Naim App issues in this forum, you might start a trend.

I can have the laptop sitting on the coffee table in front of me and see what’s playing without having to pick up a phone.

I’ve had a chance to briefly test this feature with the ND5 XS2. First of all it doesn’t seem to work with the OpenHome instance of the streamer that Bubble server creates, just the regular ND5 XS2 so it seems fair to say that Bubble server is not required. I tested it with the Amazon Music app on my phone and tried the War on Drugs Live Drugs album and it played back gapless! I don’t have an Amazon Music account so this was just an Amazon auto-rip of the vinyl I bought from them so it was only mp3 quality. I’m assuming that it will cast in whatever resolution the casting app is playing in. This could be a simple way to get Amazon, Apple, Deezer and so on playing without Chromecast to Naim streamers as long as you have an Android device.

Didn’t know that… finally a multi platform control app. Now installed and running on my PC. Next is the tablet

and now on Samsung tablet… ‘simples’

Could this, for me, take over from Bubble app?

Good grief… now working with Roberts radio and Matrix streamer. Now… I wonder it it works with the Bartok (which is a finicky device)?

For now it is the case that casting is limited to CD quality, I asked the bubblesoft dev the question and this was the reply

There is no way for the app to get the original source resolution as it has no idea about it.
The recording API only allow to specify a samplerate for getting the PCM (WAV) audio data from the system.
I believe most popular streaming apps (Apple Music, Deezer, YT Music, …) send 44.1/16 audio to the system, hence 44.1/16 being the default for audio cast. It is also the most compatible samplerate/bitdepth.
I may make the target samplerate configurable but I need first to study the Android source code to check at which stage Android is capturing the audio data, to see if it makes sense. Or if a different default samplerate would be better.
In any case, Audio Cast is not guaranteed bit perfect. it probably is for 44.1/16 source material but that’s it.
In any case, there is no recompression of the source audio (like it is the case for BT, reencoded to a lossy codec) but there can be resampling.

I didn’t realize bubble has an app. I’ve been using the Linn app on my iOS devices and it works great, esp for Qobuz lossless.

Bubble App didn’t used to be available on Apple, I’m not sure if that’s changed.

No worries for me. I quite like the Linn app.

I’ve been a Bubble (app) fan for several years but the extra convenience of the Linn app on Windows is a BIG plus. Before, I’ve been using AndyAndroid as a virtual window on Windows but it was very slow and cumbersome. So far I’m very happy with Kazoo but I’ve not yet had time to put it through it’s paces with all my streamers. btw always had excellent support from Mr Bubble and good service, in my books, goes a long way.